“After a winter’s gestation in its eggshell of ice, the valley had beaked its way out into the open, moist and yellow. The new grass bided its time underground; the mountains were retreating to their hill-stations for the warm season.”
– Salman Rushdie, Midnight’s Children 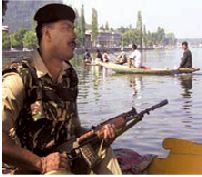 In such a landscape, as Aadam Aziz set foot on the streets of Srinagar, he was fortunate not to observe any army camp on the lakeside. He was privileged not to exchange unfriendly stares with any khaki-clad soldier. The cacophonous resonance of the coercive jackboots was not omnipresent.

Those times were different.

The year 2011 marks a new decade. Maybe a new thought process? Or will it?

Stephen Cohen is not very enthusiastic about it though. His despondency is expressly manifest in his recent comment regarding the fate of Kashmir. Cohen, a celebrated South Asia security analyst based at the prestigious Brookings Institute, lamented that Kashmir dispute shall last, perhaps, another 100 years. No doubt, his lexicon is naturally flooded with showdowns prevalent in European and American history. And 100 years’ war is a patent terminology in that regard.

What he obviously implied was the ad infinitum progress (or the lack of it) of resolving the imbroglio existing in the valley, and to nobody’s chagrin, one may infer that he meant “Kashmir” on both sides of the Line of Control (LoC).

From an exclusively Indian perspective, the last few months have been ‘quite’ quiet in Kashmir: the valley. The “Kintifada” has subsided. The frequency of bandhs has depleted. The denizens somehow have bagged the mental musculature to sneak out of their wooden architecture and stroll in the parks.

However, is this temporary lull a natural dip in a civilian-based insurrection, or is it a forced milieu created by the supra-authorities through their gendarmes and a diplomatic ruse? Or perhaps it is the outcome of an intricate mÃ©lange of various conflicting parameters spanning from effective armed authority on one hand to a focused administrative apparatus on the other?

Kashmir has remained a disjointed province from the Indian mainland, if not always, then at least for the last two decades. No statute is applicable to the state of Jammu and Kashmir. For it, a special provision exists in the constitution. For the commoner, the province is “different.” Yet, it has always been a lucrative proposition to pay a visit to paradise on earth.

The Indian academic Esa Bose gleefully concurs with such an idea. Her brave sojourn to the valley in the second week of April bears anecdotal evidence to the fact that ‘normalcy’ has returned in Kashmir, albeit only on a temporary basis. The snow-capped serenity, the reflection of azure in Dal lake, the strangely peaceful boulevards of Srinagar, the dome, those pigeons on the minarets and the column of erect pine trees flanking the otherwise treacherous terrain somehow effaces the red stains of the valley. The army and paramilitary, however, according to Bose, are cordially present — mostly visible in Srinagar at about 10-foot spatial intervals but gradually fade away as one peregrinates to the countryside.

The Indian National Congress’s (INC) sleek spokesperson Manish Tewari further assures tourists (indirectly, though). In an interaction with the experts at the International Institute for Strategic Studies on April 12, 2011, Tewari spoke of concern regarding the “generation in Kashmir that has seen almost 20 years of internal strife.” He emphasised a “concrete need to reach out to this generation” of Kashmiris with “a certain amount of sensitivity, caution and prudence.”

And prudence it was. The Government of India’s policymakers came out with a masterstroke the moment when the INC-led government was cornered due to mass protests that mirrored those of the Palestinian Intifada. The decision to ‘deploy’ a set of three interlocutors, in line with the British legacy of appointing committees to ‘resolve’ outstanding issues, worked remarkably well. The credibility of the interlocutors, a couple of them at least (Radha Kumar and Dileep Padgaonkar), was never under the scanner. Their infiltration into the hearts and minds of several sections of the populace has implemented the status quo at least. Their ‘penetration’ has stirred the ‘big-fish’ agitators. For instance, the Hurriyat Conference suspended one of its important constituents, the Ittehad-ul-Muslimeen (IUM) led by Maulana Abbas Ansari, just because the latter spoke to the interlocutors.

Whether Dileep Padgaonkar and others would succeed in eliminating popular grievances or exterminating the cross-border-encouraged militancy is uncertain. But what they have done and would continue to do for some time to come is create a conducive atmosphere for the “people-friendly” army to take over and proceed with its winning-hearts-and minds-based counterinsurgency operations (unfortunately reduced to the acronym “WHAM”).

And Lt. General Ata Hasnain seems to be the fittest person for the job. “The first Muslim officer to command the army in Kashmir in two decades, Hasnain is attempting to bridge the divide between the army and the people with his “heart as a weapon doctrine,” reported Muzamil Jaleel for Indian Express on April 16, 2011. The General’s penchant for a WHAM-based approach reverberates when he utters, “Times have changed and the army cannot limit its role to military operations. We have to look at security in much more comprehensive terms.”

A “pro-people” army under Hasnain’s command, compounded with the diplomatic agility of the interlocutors, exhibit the capability to suppress the grotesque revelation, as articulated by Basharat Peer in Granta, that there might be mass graves in Kashmir dug up by the Indian forces.

Peer wrote a gripping piece, travelling through the lanes and alleys of Srinagar, lined with walnut trees and turrets and then climactically watching the Kashmiri Intifada at the boulevard of the city. He has given graphic details of the history of the militant movement since 1989. The sad part of the whole piece was the title of the story. It read, “Kashmir’s Forever War.”

Will the war in Kashmir go on for 100 years or more, or forever?

Indeed, Peer terms it as a “war,” a war with the Indian state. Apparently, he presents an unbiased picture of the stone-pelting Kintifada in his article at Granta. However, at closer scrutiny it appears that he might have missed a couple of points. For example, he does not talk about the plight of the Kashmiri Pandits. He does not talk about any demographic cleansing. As a mainland Indian, it is disheartening to discover that Indian forces could be so brutal, so Nazi-like, as portrayed by Peer. Or maybe, that is the very essence of realpolitik, the very ingredients of counterinsurgency, which we as city-bred, potato-fleshed, chicken-hearted individuals are not able to fathom, let alone digest.

Is there no solution for Kashmir? Can there be a referendum in Kashmir? Can the people decide their fate, ever? Would that be detrimental to India’s (and Pakistan’s for that matter) prestige in the world forum? A believer of realism in foreign policy would reply in the affirmative. On the other hand, a humanist may feel that a referendum is necessary, though not before relocating the Pandits in Jammu.

Geopolitically, India may not be able to afford the loss of Kashmir. But who would be held responsible for the reddening of the orchards in the times to come: the Indian (or Pakistani) state, the Kashmiri separatist strand or the western importation of the concept of nation-state itself?

Did Mirwaiz Umer Farooq mean business when he urged the Pandits to return to the valley? Addressing a Friday gathering at Jamia Masjid in Srinagar on June 10, he said: “We have always maintained that Kashmiri Pandits are an inseparable part of society and their return should not be linked to the resolution of Kashmir issue. No one here says that they should return only when the Kashmir issue is resolved.”