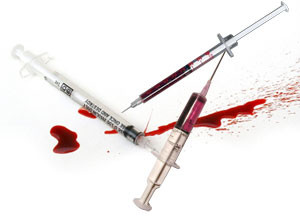 Thirty-year-old Palwasha has been fighting the HIV/AIDS virus bravely for the past five years. “I was only 25 and married for a few months when I tested positive for HIV/AIDS. My husband had returned to Saudi Arabia to take up his job as a migrant worker. I feared my days were numbered as all I knew about the disease was certain death,” she told Newsline.

Palwasha, who has been helping many other infected persons to cope with AIDS, is not the only Pakistani suffering from this deadly disease. An estimated 98,000 persons of all age groups are infected with the virus. However, most of them are not listed in the record books of the government’s AIDS control programme.

According to UNAIDS (United Nations Programme on HIV/AIDS), globally two million people die from AIDS every year. While the estimated number of people living with the virus in 2010 was 33.3 million including 2.5 million children, the number of newly infected persons worldwide in 2009 was 2.6 million. Of these, only 5.2 million HIV patients were able to get the life-saving antiretroviral drugs (ARV).

Although no official figures on the number of infected persons in the Khyber Pakhtunkhwa and the adjoining Federally Administered Tribal Areas (FATA) are available, surveys conducted by non-governmental organisations seem to suggest that at least 20,000 men and women are infected by the disease. Yet, only 731 such patients are registered with the provincial AIDS Control Programme.

The manager of the programme, Dr Sher Muhammad Khan, tells Newsline that the ARV drugs are available to AIDS patients at two treatment centres in the province. “A total of 672 HIV/AIDS patients including 163 females and 30 children are being treated at the Hayatabad Medical Centre (HMC), while 59 persons are undergoing treatment at the AIDS Control Centre in Kohat. The HMC also provided treatment to 72 Afghan patients who came to Pakistan on visit visas from Afghanistan for treatment, as well as two Zambian patients,” say Dr Khan.

A large number of the infected persons are Pakistani migrant workers based in the Gulf States, who are known to frequent brothels and seek out sex workers. “The number of men that were infected while working abroad is 313. They included 202 working in the United Arab Emirates and 47 in Saudi Arabia. The infected males transferred the virus to their wives and from them the HIV virus was passed on to new-born babies,” Dr Khan reveals.

Other common ways of transmitting HIV and other serious viruses such as Hepatitis B and C in Pakistan include the use of non-sterilised equipment by professional and non-professional medical practitioners and non-steralised instruments at barber shops. “A major reason for the rise in the number of AIDS patients in Pakistan is the unhygienic practices of non-registered dentists and other medical practitioners,” points out Dr Khan.

Palwasha, now the provincial president of the National Association for People Living with HIV, believes that the unhygienic practices of some doctors could be the reason behind her illness as she never had any illicit relations. “I underwent surgery and visited the dentist in our village a few times before my marriage and that is where I believe I got infected,” she says.

She was fortunate to have met Nighat at the non-governmental organisation AWARD in Peshawar. “My life changed after meeting her,” says Palwasha. “Nighat taught me how to overcome the fear of AIDS. A week’s counselling with her altered my attitude and I soon began counselling other infected females,” she recalls.

Palwasha kept the news of her disease hidden from her husband until he returned to Pakistan. “I feared that he would send me my divorce papers from Saudi Arabia. But he was caring and understanding. He told me he that he trusted me.” Fortunately, he tested negative for HIV and after a few days of counselling, he was able to understand that the disease could be caused by means other than unsafe sex.

The use of dirty syringes is a very common source of the spread of HIV. A number of drug addicts use syringes to inject liquefied heroin into their veins. As they cannot afford to buy new ones, many addicts use second-hand syringes. Also, addicts often share the same syringe, which multiplies the risks of the spread of infectious diseases, such as Hepatitis B, C and HIV.

Muhammad Arif, a 24-year-old drug addict, first caught the Hepatitis C virus, followed by TB and then the scary HIV through an infected syringe. The pale-faced Arif narrates how he used to pick up any syringe found in the waste lying outside hospitals. “I used to insert all types of syringes in my arms, legs and hips to inject heroin. I would pick these syringes from waste dumps and often share them with other addicts,” he recalls, wiping the tears rom his face.

Arif is being treated at the Dost Welfare Foundation, a non-governmental organisation for the rehabilitation and treatment of drug addicts. Speaking to Newsline, Dost Welfare Foundation’s Project Director Muhammad Ayub reveals that nearly 40% of the drug addicts on the streets of Peshawar used injectable heroin. “Our study shows that one out of 10 users of liquefied heroin is infected with some serious disease, HIV being one of them. Every year we get at least four HIV-positive drug addicts.” 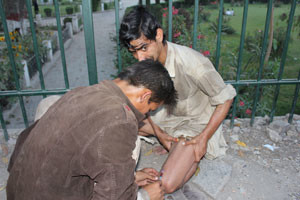 Unfortunately, none of the AIDS treatment centres in Khyber Pakhtunkhwa have any CD4 and Viral Load machines to conduct vital tests on the infected persons. HIV patients in the province are required to travel to Islamabad’s Pakistan Institute of Medical Sciences where these machines are available.

The Viral Load machine costs four to five million rupees and is used to monitor the HIV virus in the blood of the patient. More important is the CD4 machine that counts the thymus lymphocytes (T-cells) in the infected person. The T-cell count helps to determine the stage of infection, the required drug prescription, the patient’s response to the ARV treatment and ultimately, the progression of the disease. The cost of the CD4 machine is five million rupees.

Initially, Dr Sher Muhammad Khan had requested the Global Fund to provide a Viral Load machine to the AIDS Control Programme in Khyber Pakhtunkhwa, which they promised to do. “However, now we have requested them to provide us a CD4 instead as it is more important for our patients. They have agreed to our request and we will soon receive and install the CD4 machine at the HMC.”

Meanwhile, the Viral Load machine will be purchased with the funds the provincial government has promised to release, says Dr Khan. The installation of the two machines would undoubtedly save HIV/AIDS patients the trouble of travelling all the way to Islamabad for tests, but they will need to be strong minded in order to cope with the challenge of living with this dreaded disease.