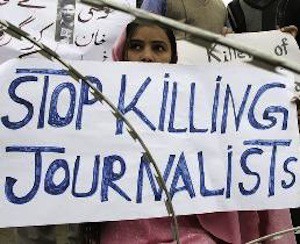 The murder of journalist Syed Saleem Shahzad has rocked the journalist community. While the US-based Committee to Protect Journalists had already established that Pakistan was the “world’s deadliest country for the press in 2010,” Shahzad’s death was particularly unnerving because the main accused has been the ISI, the country’s top intelligence agency.

Shahzad went missing in Islamabad on May 29 while en route to the television studios of Dunya News to discuss an article he had written for the Hong Kong-based Asia Times Online. Two days earlier, the news outlet had published Shahzad’s explosive investigative report uncovering the depth of militant penetration within the Pakistan Navy. His report was devastating to the image of the military as it revealed a weakened Navy that had been infiltrated by Al-Qaeda and was in disarray. The report alleged that officers on the inside provided maps and other information to militants to carry out the PNS Mehran attack on May 22.

On May 30, a day after Shahzad went missing, Ali Dayan of Human Rights Watch (HRW) had communicated with the public via Twitter that HRW had “credible information” that Shahzad was in the custody of the ISI and would be released later that night. Besides a letter Shahzad had sent detailing what he deemed to be a veiled threat by the ISI, HRW also said it spoke to sources who confirmed that Shahzad was indeed being detained by the ISI. But on May 31, police announced that the journalist’s body had been found in Mandi Bahauddin, about 140 kms southeast of Islamabad. (See a thorough summary of events revolving around Shahzad’s death by HRW here, including a copy of the above-mentioned email he sent to HRW and two other parties).

Since then, journalists across the country have been outspoken about the worsening state of press freedom in Pakistan. Reporters admit to massive self-censorship, and some say they deliberate over every word they write and say. In a seemingly lawless environment where violent aggressors can act with impunity and many perpetrators get away scot-free because of a “lack of evidence,” there is not only despair and frustration among citizens but anger too.

Led by the Pakistan Federal Union of Journalists (PFUJ), members of the media demanded a transparent inquiry into the murder of Shahzad and protested in the capital when the government dragged its feet in setting up a commission. They called upon the government to provide protection to journalists and to take measures to ensure freedom of the press.

Against mounting public pressure, the government relented. On June 20, a Supreme Court judge was approved to head the commission, and on June 21 Prime Minister Yousuf Raza Gilani announced the names of all the commission members (the president of the PFUJ has been included).

Dawn reports that the commission is tasked with answering the following questions:

(i) to inquire into the background and circumstances of abduction and subsequent murder of Saleem Shahzad
(ii) to identify culprits involved in the abduction and subsequent murder
(iii) recommend measures to prevent recurrence of such gruesome incidents against journalists in future
(iv) to probe the matters of conduct which are in derogation of Articles 4, 9, 17, 19 and 19A of the Constitution and investigate in-depth such background facts.

The commission has six weeks to report its findings.

Have your say. Vote in our poll:

The Case of Saleem Shahzad: A Timeline of Events