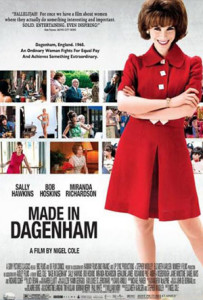 1968, Dagenham, England: “Industry cannot afford to pay women the same rates. That is a fact. If it is forced to, it will have to do it across countries, and it will collapse. Go break the strike,” bellowed the boss in America at the Ford managerial staff in England over the phone.

What started as a movement to gain acknowledgment as skilled workers, soon turned into a campaign for equal pay and dignity. Made in Dagenham traces the equal pay movement led by female labourers in the English town of Dagenham, which eventually led to the 1970 Equal Pay Act. It charts out the misogynistic attitudes, the vested business and political interests and the male-dominated hierarchies within the industrial system, but also the journey of one woman in particular: Rita (Sally Hawkins), not at all a fiery ‘activist type’ but one who stands out for her clarity and quiet forcefulness, and becomes the bastion of hope for her co-workers.

There is resistance every step of the way: at home and on the public front. All kinds of tactics are adopted to break the strike, and the women’s resolve and solidarity. And there is a broader impact and consequences.

While the men (husbands) initially support the female workers and their strike, when they get the axe — because without the seat covers the women were making, there are no seats for the men to fit into cars and hence no jobs for them either, causing Ford to shut down — the tide turns. Then their only demand is for the women to call off the strike and return to work. Men are the breadwinners they say, the women only earn that ‘something extra’ to keep things comfortable at home.

Against this backdrop, relations between Rita and her husband become strained. Constant pressure from the other men and a bruised ego lead to Eddie, Rita’s husband, confronting her and insisting life return to ‘normal,’ i.e. they revert to playing their traditional roles: he the breadwinner and she his support. Says Eddie: “I ain’t out having a beer every night or screwing other women. And I’ve never once raised me hand at ’ya. Ever. Or the kids.” To which Rita responds: “You’re a saint now, is that what you’re telling me? Because you give us an even break? You don’t drink, you don’t gamble, you join in with the kids, you don’t knock us about. Oh lucky me! For Christ’s sake Eddie, that’s as it should be! Rights, not privileges! It’s that easy!”

Pressure notwithstanding, the women remain steadfast in their purpose. Impressed with the women’s strike, the only female cabinet member, Mrs Clarke (Miranda Richardson), the secretary of state, a redheaded firebrand in the true sense of the word calls a meeting with them. But the Ford rep, who was earlier ordered to break the strike, is not about to allow them to garner government support. An interesting exchange takes place between him and Clarke — interesting because the tone taken by the Ford representative is so familiar.

To Mrs Clarke: “I think we both want the same thing. I think we want to see Ford Motors employing British workers. Don’t make us build our cars elsewhere. Help us hold the line here. Support our efforts to combat these constant strikes which undermine our ability to build cars at a profit which is in fact why we are in business in the first place. Otherwise we will take our factories elsewhere.”

Mrs Clarke: “Are you threatening me?”

Response: “I’m trying to stop 40,000 people from losing their jobs. That’s how many workers Ford employs in this country. Now I don’t think either one of us wants to take that risk, surely.”

Lest Made in Dagenham seem like a dry docu-drama-like film, it certainly isn’t. It is a well put together script that does, admittedly, contain serious content, but is saved from becoming earnest and ponderous due to the handling of the material and good performances. Also, Dagenham may well deal with a specific movement and era, but it has a timelessness in some of the issues it raises, the misogynistic attitudes it reflects and the toll public life can take on private life. Some things perhaps, never change.

This movie review was originally published in the June 2011 issue of Newsline under the headline “Rights and Wrongs.”