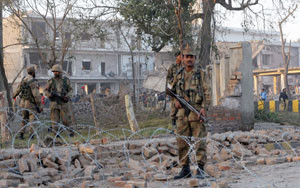 The twin-suicide attacks outside the Frontier Corps Fort at Shabqadar (May 13), that left almost 100 dead, the PNS Mehran raid (May 22) registering 10 casualties, the early morning mobile suicide strike at the CID Police Station opposite the Peshawar Defence Housing (May 25), and a deadly attack on the DPO office near the Orakzai Headquarters in Hangu (May 26) testify to the length and breadth of the asymmetrical war that Pakistan currently faces.

The security apparatus from Karachi to Peshawar and further north is stretched and constantly under attack. The ISI has lost almost 90 operatives in the last six years (the joint session was told). It is nothing less than an open war on the interests of the state of Pakistan. Stunned and embarrassed by the American Navy Seals’ unauthorised intrusion to get Osama bin Laden on May 2, the entire military and intelligence establishment today faces a situation unprecedented in its awkwardness; following years of almost unchallenged direct or indirect authority, the security apparatus, for the first time, appears under strain, and confronted with an ever-growing chorus of accountability, including questions on its credibility and competence as the guardian of this country’s ideological frontiers.

One of the questions arising out of these volatile circumstances is whether Pakistan’s intelligence establishment is professionally in sync with the unusual threat levels confronting the country today.

Historically, the Inter-Services Intelligence (ISI), the Intelligence Bureau (IB), Military Intelligence (MI), Special Branch, Crime Investigation Department (CID) — have had their share of failures or oversights — advertent or otherwise. But rarely have they faced accountability. Mostly they have stayed above the performance audit. The primary reason: the intelligence apparatus serves as the bedrock for the state’s notions of security, which flow from the military’s continued obsession with the “geo-strategic relevance of Pakistan.” This combination — the state’s notions of security and its obsession with the country’s geo-strategic relevance — therefore essentially rules out real censure of the intelligence outfits, which has thus far acted as a supreme authority that can be, at times, intrusive, vindictive and destructive as well. Recently, the Supreme Court did confront the agencies and admonish them in the case of political disappearances, but the apex courts are bound by their own limitations, and in many instances, helpless, primarily because the intelligence agencies remain tied into the military-led geo-strategic security paradigm, thereby precluding the possibility of a real scrutiny of their conduct.

A closer look at the institutional capabilities and performance — based on personal observations with important players within the military and intelligence apparatus — leads one to conclude that these institutions, like so many other state entities, also suffer from problems that are inherent in their structure:

Some of these factors directly undercut efficient information-gathering and insightful analysis. In the absence of intellectual insight, and little knowledge of the geo-political factors that are directly influencing Pakistan, local operatives often seem trapped in a time warp, using techniques and strategies which may have worked in the past, but have lost much of their relevance today.

It is because of this institutional framework that our intelligence outfits still look at the threats from religious militancy largely in numerical terms. They usually assess the strength of militant groups in numbers, and do not weigh them against the ideological proliferation of society that is taking place via these groups. Secondly, the security apparatus, including the intelligence agencies, measures losses in terms of damage to physical assets (P3C Orion), while seemingly remaining oblivious to the damage that accrues from incompetence or complicity.

Besides structural obstructions, several socio-political factors also impede effective functioning of the intelligence apparatus. These include:

Firstly, the presence of supporters/ sympathisers of religious radical elements within state institutions, an element that provides the most probable explanation for precise attacks on the PNS Mehran, GHQ (Oct 2009), or three regional ISI headquarters. The fact that Osama bin Laden and his family remained undetected for so long in Abbottabad also suggests that some officials or low-key operatives were in the know of things.

Secondly, the prevalence of social support for militants (sympathy, empathy, complicity wrought of either fear or favour, ethnic or tribal affinities). Most of the religio-political parties, for instance, serve as the social safety net for persons or groups wanted by state institutions. Even the Tableeghi Jamaat centres, considered out-of-bounds for security agencies, offer hideouts for wanted criminals of the militant kind. This obviously places operational limitations on the counter-militant campaign, and thereby indirectly blunts information-gathering or action against those wanted by the law.

Cumulatively, a cold-war era outlook heavily influenced by the security state mindset and a porous socio-political environment results both in incompetence, as well as direct or indirect complicity of state functionaries in matters that require extreme care and professional competence.

That is why the biggest challenge that the state of Pakistan is confronted with today is to devise how to:
a) develop a clear vision for the role of intelligence agencies
b) define their socio-political limits
c) ensure merit and a meaningful level of education for functionaries of intelligence institutions
d) empower these functionaries with modern tools of information-gathering
e) purge these institutions of functionaries whose loyalties rest with people and groups that are inimical to the interests and state of Pakistan
f) empower them with legal tools to keep all reglio-political groups and parties under scrutiny
g) ensure that intelligence agencies stay focused on their primary job and deal with all the groups across the board, rather than being selective (because selective handling has been one of the causes of their failures and incompetence), and
h) ensure greater and regular inter-agency synchronisation of planning and action.

Performance and success will remain questionable in the absence of coordination among various intelligence arms of the state. Unless they see eye-to-eye and stand by one another on critical national matters, non-state actors will continue exploiting the discord and sporadic responses by the state, thereby piling more misery and humiliation on state institutions.