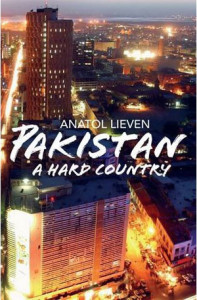 Pakistan, as the title of journalist Anatol Lieven’s book attests, may not be the most hospitable country in the world even for fly-by foreign correspondents, but those who report on it accrue at least one clear benefit: even a year spent in the country guarantees a book deal. Lieven is only the latest in an endless line of reporters, pontificators and arm-chair analysts to try and explain Pakistan to those who know and fear it as a nuclear-armed state overrun by Islamic militants who crave bombs and despise women. Although not without many of the problems that plague such generalised accounts, Pakistan: A Hard Country manages to be clear-headed and realistic, a welcome respite from the scare-mongering that taints so many western accounts of Pakistan.

At first, A Hard Country may seem like an inartful way to describe Pakistan, but Lieven explains the subtitle of his book convincingly. Certainly, Pakistan is a hard country to live in for its citizens and hard to work in for journalists. No matter how much we enjoy stressing our diversity, the tolerance of a vast majority of our citizens and our thriving culture, there is no denying that Pakistan can be quite a nuisance on the world stage. But Lieven’s definition of hard goes deeper than that. Pakistan may routinely be described as a failed state that is plagued by terrorism and poverty. Yet is has survived over 60 years of being pronounced a failure. That, Lieven posits, can only be explained by the hardness of Pakistan’s citizens. We have the strength and fortitude to withstand every challenge the country faces, bruised and battered certainly, but not yet knocked out.

As a central thesis, this dual definition of hardness is a sound one. Unlike others who have written about Pakistan, though, it is Lieven’s optimism that is a bit jarring. His arguments will be familiar to local readers as he employs arguments that we have used, even if we aren’t convinced of their rightness, as a defence mechanism against those who have already dismissed us as a failed state. Yes, the Taliban exists but religious parties never fare well in elections. Certainly, Wahabism has spread but our long Sufi tradition will counter that. These lines of debate are faulty because they refuse to acknowledge that Pakistan has changed. The forces of obscurantism are spreading and gaining in popularity and the buffers against them are weakening. Sufi shrines are specifically being targeted by militants and our long tradition of tolerance has done nothing to arrest the militant march, or even provoke a significant public outcry against the bombings.

Like many western journalists, Lieven, who reported on Pakistan for The Times during the Zia era, falls for the lie that the military is the most efficient and only unifying force in the country. Recent debacles, like the presence of Osama bin Laden in Abbottabad and the daring attack on PNS Mehran in Karachi expose the intelligence shortcomings of the military. Pakistan has been through four military dictators not one of whom has left the country better off after their authoritarianism. Much of the current mess is Zia’s poisoned gift to the country, a fact that Lieven should be well aware of. It is then off the mark for him to say that democratically-elected leaders, flawed though they may be, tend to be more authoritarian than military dictators.

Lieven is at his best when he writes not as a journalist but as an anthropologist. He unpacks the tribal nature of Pakistan’s politics and how that has led to a rejection of western definitions of democracy and justice. Unlike many liberals at home, Lieven does not see the tribal system as a hindrance to Pakistan’s development; rather he considers it a key stabilising factor.

Islamic militancy, too, is not the biggest problem Pakistan faces, contends Lieven. That distinction, according to him, belongs to climate change. He believes that Sindh could be ravaged by global warming, setting off a catastrophe that will finally make the most pessimistic predictions about Pakistan come true. It is a conclusion that can be hotly debated and is, to put it mildly, controversial but unlike most books about Pakistan it will actually give the reader something to chew on.

This review was originally published in the June 2011 issue under the headline “Hard to Swallow.”