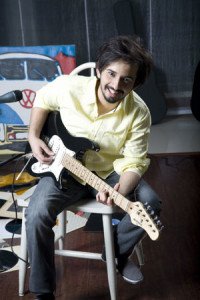 Music for the Soul

Hassan Jamil Khan, commonly known as Jimmy Khan, performed in Karachi at Gun Smoke to promote his new single ‘Pehla Pyar’ and made quite an impression. The young, Lahori musician is currently working on his Extended Play (EP).

He strummed bluesy tracks such as ‘Ain’t No Sunshine,’ which beautifully matched the country-western ambience at Gun Smoke, while the audience engaged in light chatter.

Khan started off the night with Johnny Cash’s ‘Walk The Line,’ and as the audience cheered him on he went on to perform one of his original tracks, ‘Tell Me,’ followed by his new single ‘Pehla Pyar,’ which got quite a few requests for an encore. Shouts of “I love you, Jimmy” from the audience were proof of his fan base in Karachi.

The singer also went on to perform another original titled ‘Aisay Kaisay,’ which he hopes to release in July. Interspersed through the night were familiar tracks such as Jack Johnson’s ‘Better Together’ and ‘Chasing Cars’ by Snow Patrol. Jimmy Khan ended the night with ‘I Want You’ by Kings of Leon.

Will Jimmy Khan be the name to look out for this summer?

Click play to watch the video of Jimmy’s new single: