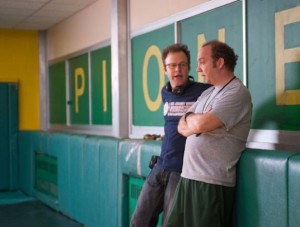 Winning is not an Option

Mike Flaherty has problems. They might be mild, everyday problems, but they are still capable of sending him into panic-attacks. In Win Win, Mike (Paul Giamatti) is pressed for money as his law practice is failing, the wrestling team he coaches is losing chronically and the boiler at his office needs to be replaced before it explodes. One of his elderly clients is deemed unfit to live independently and, since his daughter is unreachable, ordered to move into an old persons’ home. Leo Poplar (a wonderful, heart-breaking turn by Burt Young) would prefer to remain in his house, but this is only possible if he can find a legal guardian. Mike resolves this situation by making a cruel, self-serving decision that comes back in the third-act to create some inevitable conflict.

In the meantime, Leo’s grandson arrives in town to live with his grandfather, but is taken in by the Flahertys due to Leo’s condition. Kyle is a blank, matter-of-fact teenager who has moved away from his troubled mother, who is in rehab. He is played ably by real-life wrestling champion Alex Shaffer. The excellent Amy Ryan plays Mike’s wife Jackie, a stern, no-nonsense mother who threatens to inflict violence on Kyle’s absentee parent for her irresponsibility. Mike is thrilled when he discovers that Kyle is a wrestling prodigy, and enrolls him into the local high-school so that he can join his languishing wrestling team. Things go well until Kyle’s druggie mother arrives. Win Win also features Bobby Canavale in a role meant almost explicitly for comic relief, as well as the great Jeffrey Tambor as Mike’s flustered co-coach.

Director Thomas McCarthy deals with earnest, good-hearted everymen put through the rigors of ordinary life. His last movie, The Visitor, has much in common with this film, but was, on the whole, more complicated and provocative. Win Win is less ambitious and more accessible than his previous work, but still possesses McCarthy’s signature generosity of spirit and muted charm. He empathises with his characters and makes them thoroughly real and likable, but never uses them to take the audience on the mechanical, uninspired emotional rollercoaster that climbs slowly from disappointment to redemption before rushing downhill while everyone shouts, claps and cries. McCarthy works with a story nearly tailor-made for saccharine moments but instead mines it for gentle, wry observations that are moving without being manipulating. Take, for example, Mike’s financial woes and the resulting moral difficulty that lead Mike to go behind his store-front office and nervously smoke cigarettes rather than deliver emotional monologues delineating his frustration for the benefit of the audience.

The ending is terrific and is emblematic of the film: funny, sad and casually heartening. Ultimately, Win Win is not so much a study of morality as it is an inspection of how ordinary, well-meaning people behave when faced with their small-time lapses in rectitude. So the conundrum Mike grapples with is not particularly complicated or compelling, because this is not an attempt get the audience to consider the slippery nature of right and wrong. It is, rather, a simple, acutely observed portrait of a man who sighs and worries and tries to do the best he can.

Paul Giamatti does vexed and bothered like Edward Norton does wise and jaded and Dolph Lundgren does blonde and well-built. He is blessed/cursed with the ability to play fretful, down-on-their-luck characters with superb, beguiling understatement, and one of the main pleasures of this film is watching him shoot glances pregnant with prickly resignation and smile his weary, lop-sided smile. The writing is the other main attraction. While McCarthy does not shoot for anything very challenging here, he compensates by writing dialogue that we can believe is uttered by real people: it is low-key, sturdy and frequently hilarious. I could say something about how Win Win could have done with a little more ambition, but then it would not have been the film that it is. It might not be pushing the envelope, but it is a small, excellent film all the same, and one of rare warmth and charm.