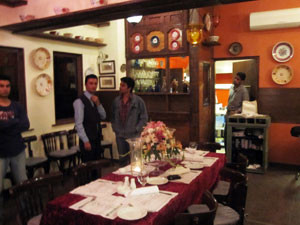 People often say that whatever happens, happens for the best. Well, in the case of CafÃ© Blue Ginger, the maxim surely holds true. Some time ago it had opened its doors in Clifton, but it never really managed to take off: it was forced to shut down and change location. This time round, not only is its location more accessible but also the quality of the food and the variety on offer is far superior to that of the original outlet. For starters the fare is continental and not desi, as was largely the case with their previous menu. Moreover, back then, the food simply did not gel with the ambience of the place.

Well-located on main Zamzama Boulevard in Karachi, this time around the eatery is smaller than its Clifton predecessor. It is quaintly decorated with lots of colourful ceramic plates and bowls, while paintings adorn the walls. The wooden tables and chairs with cushioned seats complement the wooden panelling and tiled floors, lending the cafÃ© a warm, cosy feel.

While nibbling on complimentary veggies with dip, which seems to have become the staple starter at most high-end eateries, we ordered a salad from the appetisers section of the menu. Comprising iceberg lettuce in a creamy dressing, with grilled chicken, roasted peppers, tomatoes, olives and cheese, the salad could have been more appetising had it been doused in less dressing. Our second appetiser, stuffed giant mushrooms, however, was succulent. Filled with sautÃ©ed spinach and topped with parmesan, it had just the right amount of butter. One member of our group of five also decided to try the tomato and roasted garlic soup from the soup section. Unfortunately it turned out to be a disappointment.

From the entrees, one person opted for grilled chicken picacala — chicken breast fillet drizzled with olive oil and lemon-butter cream sauce. It was a wholesome and tasty dish accompanied by scalloped potatoes, greens, cherry tomatoes and capers. I ordered the grilled red snapper with tarragon mushroom sauce. Grilled to perfection and smothered in tarragon cream sauce, the fish fillet was delightful and the accompanying vegetables and roasted mushrooms made it a complete meal. The third guest in our group opted for grilled beef tenderloin and was not disappointed with her selection either. Marinated in fresh rosemary and garlic and served with creamy spinach, mashed potatoes and asparagus, it was a sumptuous offering. Perhaps, the only one not satisfied with her selection was the friend who ordered fettuccini prawns with marinara sauce. The prawns were chewy and failed to impress. On the other hand, the fettuccini alfredo turned out to be divine. Doused in roasted garlic cream sauce and tossed with mushrooms, spinach and grilled chicken, the dish comes highly recommended.

To wash down our meals, we ordered mint lemonade and fresh apple juice. We were thrilled with both. Unlike most restaurants, the drinks were served chilled. Since a meal feels incomplete without at least tasting a dessert, we ordered blueberry crÃ¨me brulÃ© and bread pudding. The former was a generous portion of a rich and creamy custard infused with blueberries and topped with a thin, crisp, caramelised crust. Sinfully good! But my vote would go to the bread pudding. Served warm with butterscotch sauce and vanilla ice cream, it somehow felt less laden with calories and was delicious.

All in all, at Blue Ginger the food is good, the service is efficient, and the soft music playing in the background is a welcome departure from the noisy outlets where one can’t even hear oneself think. However, I do have one grouse with the place: it is far too expensive. Surely a cafÃ© is different from a fine-dining restaurant, but the prices at Blue Ginger are on the steep side even for fine dining.