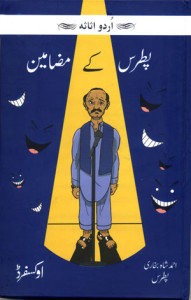 Unlike their counterparts in the English language, classics in Urdu are fast vanishing from the market. Earlier, literary organisations such as the Majlis Tarraqqi-e-Adab, Lahore, had undertaken the task of printing standardised and edited volumes of the major and minor classics in Urdu literature, but as is the fate of such well-intentioned but poorly managed bodies in the public sector, these efforts could not be sustained, possibly due to a paucity of funds. Given the non-availability of classics in the market, OUP’s reprints of two Urdu classics are a godsend.

Pitras Kay Mazameen is part of a series called Urdu Asasa, designed to fill this gap. The inscription on the cover of the new edition of Tagore’s Gitanjali says that it is being published to mark the 150th birthday of the author. Poet, fiction-writer and the first Asian to win the Nobel Prize for Literature, Tagore wielded enormous influence on Urdu writers when his work became better known, specially after the Nobel prize. And while there have been some rumblings of discontent against him, he continues to be extolled as a major literary figure. The well-known scholar Niaz Fatehpuri translated Gitanjali into Urdu, and later Firaq Gorakhpuri also published his translations, although these wore of the same caliber as Niaz’s work. In fact after reading Niaz Fatehpuri’s translations many years ago, I was not particularly impressed by Tagore.

This edition reprints the far more readable translations of Syed Zaheer Abbas, which are probably being published in Pakistan for the first time — they were originally printed in India. A learned preface by Unwan Chishti presents an interesting comparative analysis of the various translations of Tagore, showing their digressions or their infidelities to the spirit of the original — a trap most translators invariably fall into — more pronounced in this case as the English versions were the basis of what the translators were attempting to render. This edition includes a small note by poet Iftikhar Arif, commending the translation. However, this reprint could have done with more information about the translator. Additionally, there is room for a critical appreciation and further interpretation of Tagore. His birth anniversary celebrations should have served as an occasion for analysis and literary criticism and it’s a pity that this kind of background support is absent from the OUP edition. That aside, the book is well produced and it would be worthwhile if the publisher were to reprint Tagore’s other work, especially his fiction, which is no less relevant today.

Pitras Kay Mazameen is in a different league from Tagore’s translations. Pitras Bukhari’s reputation as a humourist hinges on a slim volume of essays that have been reprinted several times. I particularly recall the edition printed by Ghulam Abbas, the well-known fiction writer. With its neat calligraphy, it remains my favourite.

The brief and pointed prefatory note by Dr Mohammed Raza Kazmi in the OUP edition sets the mood for the style of the essays to follow and they seem neither dated nor have they lost their quality of bringing smiles to the readers’ faces. It is a book in which nothing, not even a sentence, seems superfluous. Decades after the publication of this book, Pitras remains unsurpassed. Writer, teacher and later a UN diplomat, the essays in this volume were not the only writings which came from Pitras’ facile pen. As an active member of the “smart set” of young writers from Lahore that later came to be known as the Niaz-Mandan-e-Lahore, he wrote a number of polemical pieces as he crossed swords with the more conservative Urduwallahs based in Delhi and the UP. For some inexplicable reason, those pieces have been added to this volume. The book, in its original form, is so complete that these additions seem to be an intrusion. However, Pitras is never mundane or boring. These comments and rejoinders, mainly literary in nature, are written with verve. And even though they seem to be a diversion from the Puckish spirit of the original essays, they are still enjoyable, and one feels that Pitras always has the upper hand in such controversies. His arguments seem robust and convincing as he gently but firmly exposes the narrowness and limited vision of his opponents, who are no match for his brilliant wit. Some additional background information on his opponent, and the issues under debate would have helped the general reader to better appreciate these pieces. However, personally speaking they should have been excluded from the book altogether. There is no justification for using them.