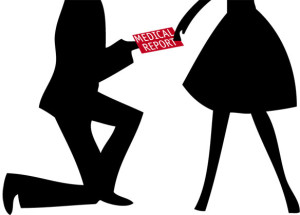 Sana Khalid married her paternal cousin 15 years ago. The couple remains childless. The agony of not being able to conceive is etched on Sana’s face. But perhaps, the agony is not just on account of being childless. That resides in the hitherto unspoken reason why they had no children. “We assumed, for the longest time, that the problem of infertility lay with me, not him. I have been a guinea pig vis-a-vis a lot of doctors, being given injections and administered medicine by them that played havoc with my system. In fact, I am still living with the side-effects of some of those medicines. This is particularly ironic, given that around five years ago when Khalid reluctantly agreed to get himself checked, it revealed the actual picture,” said Sana.

Initial tests revealed that nothing was wrong with him either. But upon a friend’s suggestion, Sana managed to persuade Khalid into agreeing that they both be screened for infections and sexually transmitted diseases (STDs). The diagnosis: chlamydia, a treatable condition if caught in time. Sana had contracted it from her husband, who confessed to having had unprotected sex before marriage. The lack of a diagnosis had led to her developing Pelvic Inflammatory Disease (PID), which in turn had led to infertility. Said Sana, “I know it was our destiny, but I still feel wronged. We are educated people, yet no one even thinks of getting one’s prospective spouse screened before marriage. If I had known before marriage what I do now, I would have at least had a choice — to marry or not. Or if my husband had been tested in time, we could have prevented my being infected. Or even if I had discovered this illness in time, I could have been treated — and I could have been a mother today. The ‘ifs’ are endless. And I am so angry with Khalid; it is completely unfair. Why should I have contracted a disease like this for no fault of my own?”

Sana’s question resonates with thousands of silent victims who suffer similar ordeals, simply because the idea of premarital screening is a huge taboo.

Infectious diseases like AIDS contracted via the HIV virus, Hepatitis B and C, gonorrhea, syphilis, chlamydia, genital herpes, etc., are transmitted through sexual contact. But in societies like ours, educating people about safe sex remains a controversial subject, more often than not swept under the rug. Thus most people, often even educated ones, remain unaware of the physical benefits of fidelity and monogamy and the dangers of unprotected sex and, as a result, entirely preventable illnesses proliferate.

Liver cirrhosis patient Hamid Soomro, 42, could have had a healthy life today if both him and his wife had undergone premarital screening for infectious diseases. Hamid’s wife, Hurmat bibi, had Hepatitis B, probably contracted by being vaccinated with a used needle before their wedding. “I was told just three days before our nuptials that she had peeliya (jaundice). I thought it would get cured with time. But instead, I contracted the illness from her,” says Hamid remorsefully. Hurmat eventually recovered, but her husband continues to struggle with a life-threatening liver condition.

Sameer Malik’s arranged marriage was virtually a done deal when the girl’s family unexpectedly stated that “while we are satisfied with everything else, we would like the boy to undergo screening for STDs.” An outraged Sameer called the whole thing off. He maintained, “They were doubting my character, my values. I could not allow that.”

Dr Sadiqa Jaffery, an unyielding combatant against diseases that hamper the health of mothers and children in Pakistan, is very aware of the inherent mindset of Pakistanis regarding screening for STDs. Said the doctor, “People will say yes to genetic screening, but no to screening for STDs. In this cultural milieu, resentment and offence are usually the immediate responses if you suggest STD screening for a prospective bride or groom. So no matter how important, chances are it won’t be done even if those involved are apprised of the dangers. The men particularly will not agree.”

That notwithstanding, a few individuals, even men, have started to think outside the box. Fahad Naveed is a media student who maintained, “I would want my potential wife to have the right to question me about things that will affect her and her future family, and I would not be offended if asked to undergo screening for STDs. Yet, I would probably shy away from questioning a girl about her sexual past, let alone ask her to get tested for STDs. I wouldn’t know how to go about asking that question.”

Human rights activist Najma Sadeque of Shirkat Gah feels that “premarital screening should be made part of legislation and be a mandatory part of the nikahnama. Individuals have the right to protect themselves from potential harm. The marriage contract, at the end of the day, is a contract. Why can it not have stipulations like this?” And if a precedent were needed, conservative Muslim countries like Saudia Arabia and the UAE have made premarital screening mandatory.

Time and again, resolutions suggesting that Pakistani couples should be required to undergo mandatory blood testing before tying the nuptial knot are brought up in both the national and provincial assemblies. “A resolution in this regard has been passed in Khyber Pakhtunkhwa, but no follow-up work has been done on it since then. The Punjab Assembly passed it, but took it back. Every now and then, a conscientious member of the Sindh Assembly suggests it, but others shut them up,” said Ayesha Mehmood, official spokesperson for the Fight Against Thalassemia (FAiTH). Mehmood asserted that “if these laws are ever implemented, they should not be restricted to genetic disorders alone, but must include STDs as well.”

Chartered accountant, Sophia Ahmed says that premarital screening is “extremely necessary. When you are interested in marrying someone, within the decorum of society and religion you should discuss questions on sexual issues, i.e. (premarital sex, impotence, interest in having children, issues of family planning, etc. In my experience these discussions have helped my marriage. It is everyone’s right to know. I have seen how people are destroyed when a spouse turns out to be a carrier of an STD or is impotent. It can be devastating,” she maintained. Ahmed also insisted that, unlike some others who agreed to answer questions only on condition of anonymity, her real name be used. “It is necessary to address issues of importance without veils and barriers,” she stated.

Journalist Alefia Hussain is of the opinion that making screening mandatory at the government level is not a practical option. “Considering how incompetent our health facilities are, they may not be in a position to respect issues of confidentiality. Especially in rural areas where people know each other, this sort of a regulation may lead to stigma and discrimination. It’s best to leave such sensitive concerns up to the couple involved. It is, after all, a private matter, and mandatory testing would be a violation of human and civil rights. Perhaps the best practice would be to scale up the targeted intervention to prevent transmission among the identified groups practicing high-risk behaviour,” said Hussain.

While there is merit in the opinions from both sides of the divide, there can be no argument with the plea that couples contemplating marriage be counseled regarding the potential risks they could face. Without information there can be no informed decisions, and everyone needs to have the right of choice. Ask yourself, if you knew in time that your partner was the carrier of an STD, wouldn’t you have wanted to know?

The Math of Disease