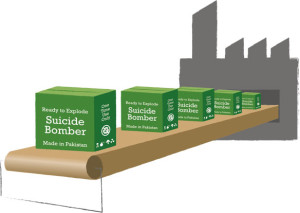 Are the drone attacks a bigger challenge for our sovereignty, or those bands of foreign and local militants who freely roam around establishing a state within a state, masterminding and planning acts of terror and sabotage across Pakistan? What undermines Pakistan’s security more, unilateral action by US forces against Osama bin Laden, or the fact that the terror mastermind remained hidden here for years?

Today, these fundamental questions are not only polarising an already ideologically divided country but also are likely to play a pivotal role in determining its future. The manner in which state institutions, civil society, political parties and other stakeholders tackle these questions and influence the narrative will either help align Pakistan with the international community, or put it in the category of a pariah state. There is no third option.

Sticking to the controversial 1980s-era policy of supporting, nurturing and protecting non-state actors and using Islamic militant groups as proxies in both Afghanistan and India will not work now. Times have changed and carrying the burden and vision of General Zia-ul-Haq any further will only wreck the country. The long-followed policies of doublespeak and duplicity are already demonstrating disastrous results. The sooner our ruling elite realises this, the better. Pakistan needs clarity of mind and action so it can earn a place in the comity of nations.

It is an irony that the country that has suffered the most in the decade-long war on terrorism appears unable to set its priorities right. The ongoing suicide bombings and terror assaults, from one end of Pakistan to the other, have claimed the lives of more than 30,000 civilians and 5,000 security officials. Al-Qaeda, the Pakistani Taliban and their other local allies have hit every segment of society and each institution that matters. From mosques to schools, posh hotels to bustling markets, military headquarters to police stations — all have suffered the brunt of terrorism and the common man has paid in blood and tears.

Yet state institutions have been selective when it comes to tackling these elements. Even when militants and their masterminds have been dealt with by military might, the state has failed to fight this battle on ideological and political fronts. The breeding grounds of extremism remain untouched.

Against this backdrop then, an organised and vocal minority led by religious parties, right-wing opinion-makers and politicians are succeeding in convincing Pakistanis that their security, sovereignty and national pride is hurt more by US drones, which target militants, than by the militants who murder Pakistani citizens.

Consider how the Jamaat-e-Islami, the Jamiat Ulema-e-Islam and Imran Khan will conduct widely-publicised ‘dharnas’ against the drone attacks but not even protest let alone stage a rally to condemn suicide bombings or the masterminds of terrorism. The religious right continues to incite people about unilateral action by the US to take out OBL but does not question what bin Laden, his wives and children were doing holed up in a garrison town in Pakistan. Why do they not ask if bin Laden was here on a visa, or whether Islamabad had bestowed Pakistani nationality on him and his family? Or question why international terrorists gravitate towards Pakistan and manage to find a support structure here that not only permits them to conceal themselves but also to recruit other ‘jihadis’ and flourish.

When President Zardari and Prime Minister Gilani publicly welcomed the elimination of the world’s most-wanted terrorist, it was an appropriate and welcome response, since Pakistan has been one of the biggest victims of Al-Qaeda-inspired terror. But soon thereafter, the country’s religious parties and right-wing politicians —­ many without any representation in parliament — managed to swing the direction of the national debate to what they bellowed was an attack on Pakistan’s sovereignty. Resultantly, mainstream parties, including the ones in the ruling coalition, caved in to the pressure and decided to flow with the tide.

The result: a unanimous parliamentary motion on May 14, which rather than taking into account the challenge of extremism and militancy, vigorously condemned the Abbottabad operation by the US and drone attacks.

Gradually, all attempts at objective self-criticism, debate about the future course of action and willingness to take responsibility gave way to denial, hysteria and finger-pointing. The unanimous resolution was certainly not the epitome of national pride and honour. In fact, it reflected the intellectual and moral bankruptcy of a ruling elite, which has neither courage, nor any vision for the future.

Bin Laden’s presence and killing in Pakistan raises many thorny questions. In a world that has little tolerance for terrorist adventurists, the bin Laden affair has exposed the country to unprecedented internal and external risks and pressure. And there can be no arguing that the international community is justified in asking tough questions and demanding from Pakistan’s civilian and military leaders an unequivocal reaffirmation of their commitment in regard to the fight against terrorism. Most vital perhaps is that Pakistan has to recognise that ultimately combating the monster of terrorism is in Pakistan’s own long-term interests, and perhaps even its very survival as a viable state hinges on this recognition.

If Pakistan is to have any real sovereignty, the civil and military leadership will have to fight to earn it. Not by taking on the world, but by ending the need for unilateral military operations by foreigners. Pakistan has to become proactive on a war footing: it has to identify terrorist hubs, root out terrorist havens, establish its writ on its territory, and create awareness among its people through a sustained and credible campaign of the need to eliminate the menace of terrorism permanently.

Pakistan’s leaders need to talk to the nation, plainly, bluntly: it is now an imperative. The people overwhelmingly seek economic development, progress, peace and normalcy in their country, not conflict with any of their neighbouring countries, or the United States and the West.

Perhaps now more than ever before, the civil and military leadership has an opportunity to use current international concerns toward Pakistan to its advantage by writing an agenda of change. But this can only be done when all pillars of the country’s leadership, in conjunction with the collective will of the people, take ownership of the struggle for a moderate Pakistan that focuses on improving the lives of its people.