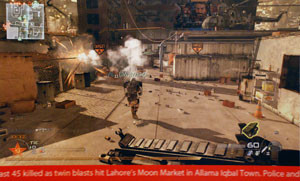 Featuring the work of three Lahore-based artists, Sana Arjumand, Amber Hammad and Saba Khan, Poppy Seed’s exhibit ‘The Urban Condition’ is a depiction of urban life in its true colour.

Walking into the gallery one is instantly exposed to the diversity of the work on display, from floor installations and glittering wall hangings to computer-generated imagery and adroitly painted visuals.

For some time now, Sana Arjumand’s work has featured the Pakistani flag either as a symbol of hope or a question mark for our collective identities, or even as a provocative emblem of what was but has now been lost. Using large-sized canvases Arjumand paints images of children in three different settings — with the colour green flowing in and out of the canvas with the star-and-crescent pattern as a print. Firstly, there is a personal narrative that raises the question of what she might have been like had she not been born in Pakistan. This is then followed by a concern for Pakistan’s future generations of children. Arjumand’s visuals convey eloquently what we express in fervent discussions in our drawing rooms.

Amber Hammad has always been fascinated with the idea of using herself as the subject matter and communicating directly with her viewers. Her work is always very personal and experiential, be it a reflection of how the death of a classmate in a blast at Moon Market affected her or how she sees herself as a mutating entity. Hammad’s medium of choice is computer-generated images displayed as paintings. Since her thesis work in 2002, she has stayed with this style of placing her own image within the context of her artwork and digitally altering a scene to lend more meaning to it. While her work is always thought provoking, one would like to see her take it to the next level. 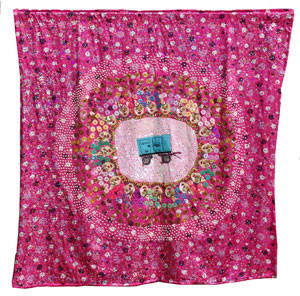 With the help of karigars, Saba Khan has created satirical yet beautiful wall hangings featuring images of generators, a classic symbol of the divide between the privileged and underprivileged, and a reflection of the karigars’ own helplessness in the face of powercuts as their work comes to a halt. Of the three pieces on display, the one titled ‘Big City’ appeared somewhat unresolved and poorly composed, while the other two, ‘Party Generator’ and ‘More Prosperity,’ had an impact.

All in all ‘The Urban Condition’ was a laudable addition to the vibrant mosaic that characterises Karachi’s art scene.