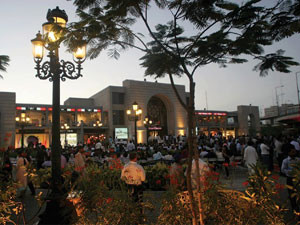 After much delay and great hype, the new KPT Port Grand Food Street had its grand opening on May 28. It drew huge crowds, but the inevitable traffic jam, due to insufficient parking space, kept many people from reaching the venue.

The enclave is beautifully developed on the reconstructed old Native Jetty Bridge. There are wide pathways, spotlights that enhance the architecture and mature trees that line the space, all with an open air ambience that is particularly refreshing. There is a separate spacious shopping area to the right and along the left there are a multitude of food outlets. You can get food from the carts or eat from any of your favourite stalls, including One Potato Two Potato and Mr Cod. However, most of the 50 or so eateries are expected to open in the coming weeks. KPT Food Street promises to attract thousands of visitors every day and may just prove to be as popular as Lahore Food Street was in its heyday.