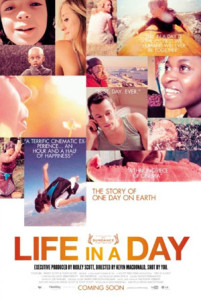 In early July 2010, Academy Award—winning director Kevin Macdonald uploaded a video on YouTube announcing his next film: Life in a Day. This film was quite literally to be a documentary about life on one random day. Macdonald requested people from all over the world to send in footage of what they would be doing on July 24, 2010. Four simple questions asked were meant for inclusion in the personal clips: What do you fear most? What do you love? What makes you laugh? What’s inside your pocket?

The response the makers got was nothing short of overwhelming, with submissions equalling about 4,500 hours of raw footage. It took about two months to view and edit the output, but the final result is a moving portrait that celebrates life with all its ups and downs.

Filmmakers are increasingly coming up with innovative ways to make films and Life in a Day is certainly an innovation in more ways than one — especially in the area of technology. With endless numbers of people uploading hundreds of videos every day, one might say that this project was an inevitability waiting to happen.

Produced by YouTube itself and well-known directors Ridley Scott and Tony Scott, every person whose submission made it to the final cut is credited as co-director.

The film unravels chronologically, ensuring that there is a clear pattern of day and night, sunrise and sunset, waking up and going to sleep. And considering that the filmmakers have managed to create a cohesive narrative from over 80,000 videos, it is an astounding achievement.

We see people from all over the world; different cultures, different ages and different dreams. There are funny one-liners like, “I love my fridge because it doesn’t talk and just stands in the corner” and endearing ones like a little straight-faced girl saying, “I fear all kinds of monsters.” There are a couple of stories that recur like leitmotifs throughout the documentary: those of a Korean cyclist who has been on the road for almost nine years, a family whose mother is fighting cancer, an old man in hospital about to have open-heart surgery, and a little boy who shines shoes for a living.

One poignant moment in the film portrays by chance an actual catastrophe. On that July 24 many people were squashed to death in a tunnel during a ‘Love Parade.’ Moments like these in the film make us realise that while Life in a Day might primarily be an uplifting and happy film, they also remind us that anything can happen on any day, tragic or wonderful. We also begin to understand that what might seem mundane to one person may be interesting to another and what stirs our senses might be of total disinterest to another.

The purpose of this film, according to the producers is to serve as a sort of time capsule. Future generations will be able to look at this film 50, 100 or 500 years from now and understand what it was like to be alive on July 24, 2010, in different parts of the world. While only future generations will be able to determine whether this experiment will successfully serve the expressed aim, for now, one can definitely say that Life in a Day is an interesting, entertaining and fresh slice of cinema, and it shows us how as people, wherever we may hail from, we are connected in one way or another.

This movie review was originally published in the June 2011 issue of Newsline under the headline “Slices of Life.”