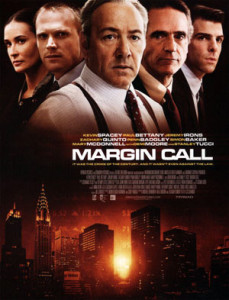 In a tragic-comic scene towards the end of Margin Call, a crying Sam (Kevin Spacey) has to bury his dead dog. Having to let go of something he has had for a long time pains him, and this serves as a striking metaphor for the film. Spacey plays a man who has given his all to his company over the years and now has to witness it go downhill due to the financial crisis of the late 2000s.

If you don’t have a clue about the recession that has affected the world economy in the past few years, chances are you won’t understand much in this film. For that reason I suggest you watch the highly recommended Inside Job first — an award-winning documentary about the same situation.

Margin Call, J.C. Chandor’s first film as a writer and director, starts off with Eric (Stanley Tucci) losing his job in a big investment bank. On the verge of an important discovery that will pretty much change everything, he passes on all his information to ex-colleague Peter (Zachary Quinto). Peter looks into Eric’s research and stumbles upon shattering results, sure to bankrupt the firm. All the main players of the company are contacted, who immediately call for an all-night conference to try and sort out the mess.

What Chandor does really well is paint a convincing portrayal of how ‘things work’ in the company. Everyone seems to have someone ‘above him’ in the hierarchy of this investment bank. Ironically, regardless of what level anyone is on, they all seem to be dealing with the same problem and are all in it together.

What is strange about this film is the calm that is evident throughout the narrative. Every character senses that a big, destructive crisis is on the verge of happening, but no one flips out, there are no big confrontations. Margin Call could and should have been a little more dramatic, more dynamic. There is no actual suspense in this film and the outcome is all-too predictable.

Furthermore, while the film tries to lend its characters a human dimension, which in itself is not a bad thing, it is still difficult to empathise with them. Will (Paul Bettany) for example, appears more interested in his food than the impending doom. And some bankers are shown to be little more than party animals (a fact that is better explored in the aforementioned Inside Job).

Having said that, Chandor has nevertheless managed to pull off a great feat for a first-time director. Also, he can boast of a rather remarkable cast. Margin Call is a film filled with convincing performances, most notably those by Kevin Spacey, Simon Baker, Paul Bettany and Penn Badgley. Stanley Tucci’s character, though seen in a cameo role, stays with you after the film.

In conclusion, Margin Call falls short largely because of the unsure treatment of the material and also some soulless photography. The cinematography appears to be cold and lifeless in many frames. This film might have worked better if made for television.

A version of this movie review was originally published in the June 2011 issue of Newsline under the headline “Impending Doom.”