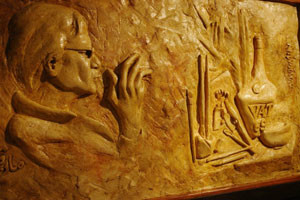 Ayaz’s latest work has taken over a year to produce. The portraits of the three great masters — the artist, the poet and the writer — were worked by hand and with a spatula. At a later stage, white cement was applied, as was soapstone dust and marble powder, all of which, the artist informed me, ensure the lasting quality of the artworks. Worked in relief, they are designed so that the portraits and other elements project from a flat surface. The three-dimensional effect is a classic art form that was most developed in the work of Italian renaissance sculptors such as Donatello. In Ayaz’s sculpture, the work is framed and mounted on six-foot tall stands. These are museum pieces and the artist has gifted them to the Sadequain Gallery, where they appear very much at home.

Ayaz has included in the compositions symbols of each of the great artists’ work and his life, a labour of love. There are calligraphic elements in the background of Sadequain’s portrait, with an emphasis on the artist’s hands and long fingers. Manto’s typewriter is represented with the writer’s spectacles and areas of Urdu script.

In the 1980s, Anjum Ayaz made a brilliant adaptation of three of Manto’s stories for stage. The plays were staged at the Pakistan American Cultural Centre (PACC) for 10 consecutive evenings and the auditorium was filled to capacity. Continuing the homage to Manto, the artist has made a relief sculpture of ‘Begum Jaan,’ one of Manto’s stories, which he is currently directing as a play for National Academy of Performing Arts.

Describing the symbols devoted to Faiz Ahmed Faiz, Ayaz related that Faiz and his family were living in this city in the early ’60s when Ayaz came to Karachi from National College of Arts (NCA), Lahore. He joined a theatre group that Alys Faiz initiated, and Faiz would come along to rehearsals and advise them on which plays to stage. He remembers those times with great warmth, and from then on Ayaz has been actively involved with drama, as a writer, actor and as a director.

Ayaz has considerable experience of outdoor sculpture in various countries including his own. There is a life-size form, carved in stone, placed at the Azabu Shopping Centre, Tokyo, and an 18-foot-high marble sculpture in China. There are other carved murals sited in Pakistan and abroad. Among the many outdoor exhibitions of his work seen in Karachi, a particularly attractive setting was of a group of sculpted forms which created an interesting walkway around the FrÃ¨re Hall, in 1998.

At the Sea View Beach in 2004, nine carved stone and four metal assemblages were placed approximated 100 yards apart. Not aspiring to monumental forms, Ayaz has carved and moulded the forms to stand on strong pedestals, the total artworks measuring between three to five feet in height. “I want people to walk around them, not to look up at them,” says Ayaz, explaining that the work was chemically treated to withstand the changing moods of nature. Sadly, the work was quite soon destroyed by vandals, but for a short time they were enjoyed by the neighbourhood and evening strollers.

Anjum Ayaz is a versatile artist who divides his time between stage-related and three-dimensional works. Leaving Lahore and NCA in his third year, he joined the Karachi School of Art (KSA), and spent an extensive period working with Sadequain, who was a distant relative. After graduating from the KSA in 1970, he struggled to throw off the influence of the renowned master. S. Ali Imam advised Ayaz to focus on sculpture as he rightly pointed out, there can only be one Sadequain. Those words came to mind in the exhibition, where Ayaz had included drawings in the style of Sadequain, doffing his own particular cap to the master.