“We are ready to negotiate, but for this, the violence must stop first”
– Tayyab Tareen, Chief Financial Officer, KESC 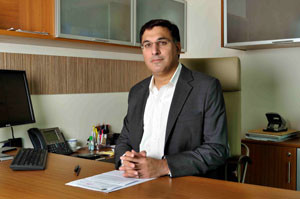 Q: The government has been asking the KESC management to resolve its issues with the protesting employees. So why the long delay?

A: The problem is that the government is not prepared to take tough decisions. It buckles under pressure, which is bad for the country’s privatisation programmme and sends negative signals to foreign investors.

In January, the government, through an executive order, forced us to take back the retrenched employees in the wake of violent protests, though we told them that KESC, being a private company, has the right to decide how it manages and runs its affairs. We had retrenched the non-core employees, including bill distributors, lift operators, drivers, sweepers and peons and outsourced their functions so that we focus on core operations and expand technical staff where necessary.

However, this time around, there has not been any retrenchment. Only the overtime and fuel allowance of non-core employees have been stopped. They are not even expected to come to the office, then why should they claim overtime and fuel.

Q: How can the government help in the problem’s resolution?

A: The government has to come out with an open stance. First of all, it must provide us protection. It needs to take a firm action against those who are involved in violence and sabotage activities. The law enforcement agencies have to put miscreants behind bars. We are ready to negotiate, but for this, the violence must stop first. The protesters have been attacking our offices, damaging the network and installations. The law enforcement agencies should handle them firmly. The government needs to get tough and play its role. It must tell them that you cannot get away with violence or take the law into your hands.

Q: What has been the role of political parties? Do you think their interference is complicating the situation?

A: Some of the leaders of various political parties have visited the employees and announced their support. This is encouraging miscreants and is not right.

Q: Non-core functions have already been outsourced by KESC. What is the future of these employees?

A: We are not leaving them high and dry. We have offered a generous VSS (Voluntary Separation Scheme), giving a minimum of 700,000 to up to five million rupees to an employee — depending on the length of service. Around 500 employees have already accepted VSS.

Q: What is the financial impact of retrenchment? Will it slash operational costs?

A: Slashing costs is a secondary objective. The primary objective is to improve the efficiency. It will be easier to handle 12,000 or say 13,000 employees than 17,000. We should not forget that KESC is a loss-making organisation. Last year, it booked losses of more than 14 billion rupees. Losses are coming down, but we still remain in the red. Our accumulated losses are at a staggering 82 billion rupees. There is massive power theft and leakages. Circular debt also remains a problem and so is the fact that the government has reduced gas supply to KESC for power generation, forcing us to shift to oil, which remains four times costlier. The government must divert gas for power production if it wants to end providing subsidies to this sector and keep electricity rates low.

But still KESC has been expanding and improving operations. During the last two years, we added 450 megawatts to the power generation. Another 560 megawatt plant is under construction.

Q: What are your terms of privatisation? Can you retrench workers under the agreement?

A: KESC was privatised in 2005. Under the agreement, we can retrench workers one year after the privatisation. The non-implementation of the agreement sends negative signals about the country’s privatisation programme. We need to find solutions. The utility is overstaffed and we have to change its culture. But it does not mean that we are anti-labour. This management regularised 7,000 employees and increased salary by 25 percent.

Q: What solution do you suggest?