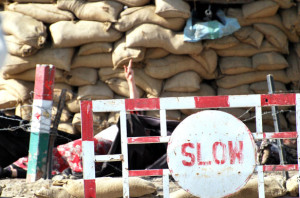 In its quest for breaking news and exclusive footage, the electronic media managed to foil the traditional attempts of the police, the Frontier Corps (FC) and other law enforcing agencies to cover up the brutal killing of five Chechens, including three women, at a FC checkpost in Quetta on May 17. The victims were aged between 25 to 30 years. Among them was a seven-month pregnant woman, who received two bullet wounds.

The Chechens were coming from Kuchlak, some 30 kilometres in the north of Quetta, in a hired wagon. The driver of the vehicle, a local government teacher who is in police custody, told newsmen that the foreigners had booked the wagon for Ghausabad, a suburb in the south-eastern part of Quetta.

A posse of policemen belonging to the Airport Road police station intercepted the vehicle in Kharotabad and started searching the luggage of the foreign nationals. According to the driver, “When a policeman slashed a bottle of shampoo belonging to them, they expressed their consternation and a male inmate of the vehicle punched the policeman’s face, while one of the women not only pulled out a hand grenade and gave it to her companion but also showed off the suicide jacket on her body. On seeing the hand grenade and the suicide vest, the police personnel fled from the vehicle. The foreigners also fled the scene and went towards a FC checkpost, and after 15 minutes I heard the sound of gunshots and a blast.”

He continues, “When the firing came to an end, the policemen told me that the Chechens had been killed.” Later, the policemen shifted me to the police station. Soon after the incident, CCPO Quetta Dawood Junejo, who had reached FC checkpost in Kharotabad, informed the media that they were suicide bombers and wanted to attack the FC checkpost.”

“One of the Chechens blew himself up, while the others were killed as FC personnel opened fire on them,” said Junejo, adding that suicide jackets and other explosives were recovered from their possession.

Alongside, Junejo lauded both the police and the FC personnel for foiling a terrorism bid in Quetta. Without attempting to learn the truth, Chief Minister Nawab Muhammad Aslam Khan Raisani also paid glowing tribute to both the police and the FC for killing the alleged terrorists. It was the media and local residents who subsequently exposed the facts behind the concocted story: the Chechens were unarmed and killed in cold blood by the law enforcement agencies.

Residents of the area, who staged a demonstration against the killings outside the Quetta Press Club, maintain that the Chechens approached them with a request to provide them protection from the police. The police had demanded a hefty bribe of $50,000 and warned them that they would be implicated in false cases of terrorism if the amount was not “coughed up.”

They further said that the policemen had been trailing them. After the Chechens had offered their Zuhr prayers at a local mosque, the policemen forced them to move towards the nearby FC post where “not only did the police open fire on them but also incited FC personnel to do the same after accusing them of being suicide bombers.”

When several reporters reached the FC checkpost following the firing, they found all the Chechens to be alive, but seriously wounded. The footage, which has been preserved in the cameras of some mediamen, shows three of them lying immobile on the floor. Two of the women appear fully conscious after the first round of firing. One woman tries to raise her head; the other who appears slightly older than the first, tries to cover a part of her body with her shawl and press her colleague’s hand to console her. She also raises her hand apparently to show that they are unarmed and innocent and therefore should be spared.

The footage further shows three to four personnel of the law enforcement agencies going very close to the wounded Chechens and then turning back.

Meanwhile, Dawood Junejo asks for a stick so that he can check whether the ‘culprits’ were wearing suicide jackets or not, but some law enforcement personnel warn him to stay away: “Sir, for God’s sake don’t go close to them.”

Incidentally, another volley of bullets was fired at them some 30 minutes after the first round, killing all five of them on the spot.

The footage not only shows police and FC personnel involved in intense firing on them but also has a shot of Lt Colonel Faisal Shezad of the FC taking a Kalashnikov from a subordinate and opening fire on them.

“There was no justification for the second round of firing, when they lay immobile after receiving bullet wounds from the initial firing 30 minutes earlier,” remarked a journalist who was covering the incident. “The police and FC said they were terrorists. So much precious information could have been obtained from them by keeping them alive.”

The eyewitness accounts of the local residents and the footage of the event negate the claims of police, the FC and the driver, as do the autopsy reports and the findings of the Bomb Disposal Squad. The Balochistan Chief Minister Nawab Aslam Khan Raisani ordered the removal of the CCPO Quetta, Dawood Junejo, following the investigations.

Junejo had claimed that suicide jackets had been found on the Chechens and that they were killed because they had hurled hand grenades at FC personnel. However, a report of the Bomb Disposal Squad revealed that no suicide jackets and no explosives were recovered from the deceased or their belongings. Meanwhile, the autopsy report stated that the main cause of death of all five were bullet wounds; the bullets were fired at them from a very close range.

Of course, the major question many people are asking is why five seriously wounded people were shot at a second time and silenced forever, when it was proven that they were unarmed. “This is what needs to be investigated. It is the key to exposing the real facts behind the law enforcement personnel’s insistence on killing the Chechens at all costs,” say mediapersons in Quetta. They argue that “bringing all the responsible officials who were involved in the extrajudicial killings of these people will help to stop law enforcers from a massive violation of human rights in Balochistan.”