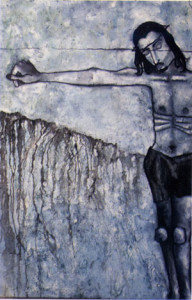 “I paint because there is a spillover of energy within me that must find form or else it will haunt and twist me….”

The works of Asim Butt on display now in Karachi showcase the canvas of the artist’s life and his creative journey. In the exhibition ‘Rebel Angel’ at the Mohatta Palace Museum, the first room exhibits portraits from his family and friends’ collections. The dark, almost macabre self-portraits reveal an inner anguish and the voracious curiosity and search for answers that drove the artist to articulate his genius in his large, often dramatic body of work. The self-portraits depict an almost emaciated figure; there is Asim as Asim, as Buddha and as Jesus Christ wearing a crown of thorns. The search for answers has seemingly left him worn and the ‘character assassination’ series leads to suicide. Disturbing as that is, there is so much more. All the portraits draw the observer towards the artist’s large soulful eyes that testify to the myriad-faceted man within; the activist, the Romantic and ultimately, the relentless rebel.

“I paint to understand the world around me and to own and disown what I desire or dislike in it. I paint as a political act….”

As an artist intrigued by the world, Asim Butt refused to confine himself merely to galleries and exhibitions as the platforms to show and share his work. His art broke boundaries and found its place in the public realm, as much an aesthetic feat as a revolt against injustice and an argument for the case of humanity.

Travelling a 1,200km stretch from Karachi to Islamabad in 2009 with journalist Adrian Fisk and a cameraman, through Sukkur, Multan and Lahore, Asim would stop at will, propelled only by inspiration and would use any medium available — a tree, wall or bench — to share his message with the world. And this included a satirical play of words on a cigarette brand: he stenciled “Kills Kings” near Benazir’s tomb, highlighting the addictive nature of violence. His other works include graffiti on footpath walls, which speaks against karo-kari and the subjugation of women, and a mural on the wall opposite Abdullah Shah Ghazi’s mazaar in Karachi titled ‘Glue,’ which emerged from his encounter with street urchins addicted to sniffing glue. In one instance, he blurred out the “P” and “O” in the word “police,” spray-painting LICE onto containers. After Benazir Bhutto’s assassination, his subversive art form took to painting car number plates with the word “Stop” in red.

Asim Butt’s fascination with the human form (anatomy) is almost palpable in his work, edging on traditionalism. But his raison d’Ãªtre was to breach the norm. He was a true renegade and by that logic he was a modernist. His collections under ‘Man and Beast’ project humans morphing and fusing with animals. Vultures, dogs, chickens and even donkeys are part of his narrative of visual representation.

Asim Butt was born in Karachi in 1978, but spent his formative years in Singapore. A Romantic at heart, Asim wrote, “My teenage bleeding heart gushed for the plight of the dolphins and the culling of rain forests.” He returned to Pakistan after boarding school in Hong Kong and graduated from LUMS, Lahore. After enrolling for a PhD at UC Davis, he went back to school at the Indus Valley School of Art and Architecture to pursue a degree in art. He died tragically last year, leaving behind a large body of work, and a huge unfulfilled promise. ‘Rebel Angel’ at Mohatta Palace will continue till July 31.