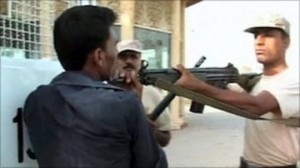 Though it has been only a year since I moved from Karachi to Princeton, on the two trips I have thus far made back home, I almost instantly head to the local salon to get my hair trimmed. I am usually attended to by the same girl, wide-eyed and elegant despite her white cotton uniform. This time around, her long nails were painted bright pink and her wrists were stacked with delicate golden bangles. She had just gotten married, and while I tried to sound exuberant in my congratulations, I couldn’t help but notice her silence.

As I settled down, I told her of how expensive the US can be, how my meagre student budget just doesn’t allow for haircuts. It was from here that our conversation drifted towards an interrogation: how much this cost in America, how much that cost, and finally, how much it cost to get there in the first place. Approximately $1,300, a monstrous amount for anyone who earns in Pakistani Rupees, like my parents, but an even more monstrous amount for her. Unbelievable, she said. America was out of the question.

We listed places that were closer by, Dubai or Malaysia, both great holiday spots. We talked of visas, and then the difficulties of Pakistanis finding jobs abroad.

That is when I realized that she didn’t want a holiday. She wanted out.

Yes, I agreed. Life in Pakistan is backbreaking work. Frustrating and stiflingly hot.

But it wasn’t the 40-degree heat that was driving her away. No. “Didn’t you see it?” she asked me, incredulous that I didn’t know what she was referring to. “The video? Of the young boy the rangers shot?”

At that time, I had no idea what had happened the night before. Later, I Googled “rangers shooting Karachi” and watched a video of a truckload of Pakistan Rangers surrounding a young man and then shooting him. I replayed the moment he pleaded with them for his life. I watched his blood pooling onto the road across from where I went to school, outside a park where children play. I saw his feet writhing as he lay on the ground, dying. And I wept.

What are we, as a nation and as individuals, to do when those appointed to protect us, kill us? I understand why my parents don’t allow me to walk outside the boundary walls of our house, or why my father keeps a pistol in his closet, beside his wallet and underneath his neatly pressed office shirts. In this country, I am forced to be a prisoner in my own house, for the country I call home has bloodied itself all over with chaos and brutality. But this isn’t about me. It’s about a young man named Sarfaraz Shah who had taken from him more than just a freedom. He was robbed of a rational evaluation of his actions, an evaluation that might have, if he was indeed a thief, led to incarceration, but certainly not to murder. When such a right, the most basic kind I can imagine, ceases to exist is when you know there is something terribly wrong.

The following morning, newspapers, rolled in neat bundles and tossed into compounds and garages, told of a Supreme Court pushing to remove the director general of the Sindh Rangers and the inspector general of police. When we seem to have lost it completely, we will do anything we can to regain a sense, however slight, of justice. But how far was what happened the fault of a system? Was it not the fault of a situation of insanity? Of losing every speck of one’s sense of humanity? At this point, I want to ask what drove one and all of those Rangers to stand and watch someone bleed to death, for what he might have done could not possibly have warranted such a cold-hearted case of murder. We must try to understand this madness. We must ask what it is that brings it on. We live in a country that is crumbling under the weight of poverty, corruption and terrorism. We have to consider that its problems may take their toll on some of us, might drive some of us to do the unthinkable.

Atrocities such as these frighten us. Nobody is comfortable calling a place that so easily scares us “home.” And so, in the back of our minds, we start considering other places, alternate homes. My mind is filled with thoughts of those who cannot run. If we fall prey to thoughts of our own potential escapes, we run the risk of forgetting to brainstorm ways to rescue those who cannot escape with us.

I won’t lie. I am terrified.

But I don’t think anyone is more terrified than Pakistan herself.