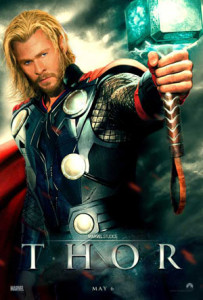 In Thor, the end credits in 3D are the best part of the film — despite the fact that in one local theatre in Karachi the comments from a rambunctious audience had everyone in stitches. Nonetheless, for Marvel comics fans, director Kenneth Branagh’s Thor might still be a treat. Still, they need a note of caution: don’t take it too seriously.

Thor (Chris Hemsworth), the Norse God of Thunder, is the more boisterous of Odin’s (Anthony Hopkins) two sons and certainly the haughtier. Exiled from his home in celestial Asgard by his father when he unwittingly sparks a war between his people and the Frost Giants, Thor finds himself an outcast among earthlings. Scientist Jane Foster (Natalie Portman), an astrophysicist, literally runs into him in her RV — taking him to be a crazy person who just talks funny. In true superhero style, Thor finds the love of his life, humility, and saves the earth from a dastardly attack.

Now consider this: A muscular, albeit rather good looking, outer space warrior falls from the sky and in doing so his ‘Mjolnir’ (magic hammer) gets embedded in the ground. A la Camelot and the tale of Excalibur no one, not even US agents with all their fancy gadgets, can pull it out. Then Jane witnesses his three warrior friends, “Xena, Jackie Chan and Robin Hood,” zoom their way to earth and a giant robot, aptly named ‘Destroyer’ almost decimates New Mexico. All this fails to shock her. She only musters up an “Oh my god, I don’t believe it” right at the end of the movie when she sees Thor’s magic hammer flying to him. Despite all the hype, the $150-million budget and Hemsworth’s noteworthy performance, Thor is no epic.

A version of this movie review was originally published in the June 2011 issue of Newsline under the headline “No Epic.”