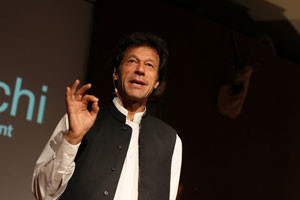 In 2010, the theme was “What Pakistan Needs Now” and it featured people from the world of development, arts and entertainment, business and technology. For the 2011 version, the defining feature of TEDx Karachi, “Making the Impossible Possible,” was its focus on the personal journeys of people who through their lives or work have made a conscious effort to make a difference. Some we know well, such as Fasi Zaka, Imran Khan, Noori and Mukhtaran Mai. But there were lesser known personalities too, such as Dr Quratulain Bakhtiari, Sarmad Tariq and Raja Sabri Khan. And their work and lives are equally inspirational.

Meet Raja Sabri Khan, an MIT graduate who has manufactured drones in Pakistan. Not predator drones though, mind you, but drones that have been bought and used globally for tuna fish research in the Great Barrier Reef, in the Amazon rain forest, in oceans, in Antartica, and even for search and rescue work. Who funded his research? “The fashion industry was the single largest funder for my drones,” he chuckled. No, it didn’t dole out the money as a generous contribution for something it had’t the slightest inclination for; Sabri earned a living as a fashion photographer and poured the proceeds into his drone research. (Incidentally, he did some fashion shoots and photo essays for Newsline as well).

Next, meet Sarmad Tariq. Twenty years ago, Tariq dove into shallow water, broke his neck and has lived with quadriplegia ever since. Following the accident, he completed his MBA, got married, bought an apartment of his own, even served for six years with a petroleum company — a job which required him to go into the field — and then gave it up for more interesting pursuits in life, such as driving for 33 hours from Khyber to Karachi, enlisting in two marathons — one in New York City (he was the only Pakistani to do so) — finishing after seven-and-a half hours of self-propelling himself on a wheelchair (not an easy task for someone with quadriplegia) and “bragging about himself and making money.”

And then there is Dr Quratulain Bakhtiari. Her life and work merit a book! Brought up in a refugee camp and married at an early age. “Twenty-one years old, three children and a bachelors” only marked the beginning of her life — and her accomplishments. She provided shelter to refugees in her own home but subsequently left the comfort of her home to move in with a community settlement in Orangi. She was estranged from her family for 10 years, but her youngest son orchestrated a reunion. Dr Bakhtiari went on to do her PhD, worked on community-based sanitation projects and education for girls in Balochistan. Dr Bakhtiari’s has been a path of perseverance. Her simple, yet heartfelt narration brought tears to many eyes.

It was heartening to see a smiling Mukhtaran Mai, in conversation with co-organiser Sharmeen Obaid-Chinoy, talk about her school and the children who she said she saw her childhood in and felt happiest to be around; to hear the witty Fasi Zaka deliver a presentation on the education emergency in Pakistan, emphasising that though “foreign policy, jobs, electricity give us a sugar rush,” it’s the “tinday” (i.e. education) which “we don’t eat unless we don’t have to” (similar to education which we don’t discuss unless we have to) that deserves more attention and more space than the 2% it gets at this point; and it was equally interesting to hear Imran Khan talk about something other than drones: namely setbacks faced during his cricketing career and the Shaukat Khanum Hospital.

Music found its way into the programme through Noori. With youthspeak as their motto, Noori’s music offers an anthem of hope and actualisation of the youth’s potential. Around Noori, in school and college, were youth that had no direction in life. “It was cool to be aimless and purposeless and that’s what we started reacting to when we began writing our music. We wrote about our own experiences. We believe the people of this country have potential.”

The second TEDx Karachi has definitely resonated with the audience far more than the first one did, and it featured a line-up of predominantly witty speakers. Kudos to the organisers, Awab Alvi, Sharmeen Obaid-Chinoy, Asad Rahman and Sophia Balagamwala, for a job well done, and hopefully we’ll see another TEDx the next year, an even better and improved version.