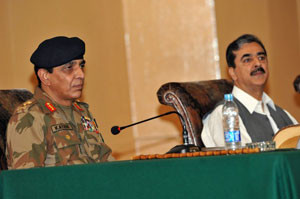 Anything you say or write about Swat — the war on terror, the military, militancy, fighting in the north — sounds either terrifying or hollow (the latter being even more terrifying). The story of the conflict is itself a conflict. All the main characters, barring one, are conflicted. You have the good army and the bad army, the good Taliban and the bad Taliban, the good local and the bad local. There’s the democratically elected government that increasingly depends on the security establishment for its survival as the electorate grows disillusioned. And then one encounters the good NGO and the bad NGO. You feel safe and yet not safe. The women are emancipated and the first woman lawyer, first woman professor, in fact, the first woman in every field is there, in her hijab, to welcome you to Swat. There is a lot going on, but it’s mainly a case of “there by the grace of the military go I.”

Swat and the army played host to a de-radicalisation seminar early last month. It was an interesting four days. Lots of smart people said plenty of smart things, all of which were important and needed to be said. The extensive discussions centred on the causes and extent of radicalisation: the genesis of the Tehrik-e-Taliban Pakistan (TTP) and its rise to power, how the local population initially welcomed the key players and then largely turned against them.

They covered all the typical bases, made all the right points. But peppered in between a motley crew of generals, security experts, terror-mindset deconstructors, bureaucrats, social workers, politicians and more generals, were three speakers who truly stood out for their original analysis. All three are well-known voices in the local media. What they said in Swat, however, was particularly important primarily because of the venue and the host.

Dr Farrukh Saleem looked at the roots of radicalisation in the context of our relationship with India. He then examined the current position of the US in the region and proceeded to propose a new paradigm for our national security strategy. The old one, he daringly said, depended only on one factor: the military. Saleem’s version 2.0 would depend on several factors including economic, political, diplomatic and military ones. He thus outlined the need to change the Pakistani mindset by looking at India through a different lens. This would require introspection at many levels, including that of the military, the arbiter of foreign and domestic policy (for the past six and some decades).

Critical questions were raised by Ghazi Salahuddin, who expounded on the role of the media, including new media, such as the Internet, mobile phones and hugely popular social media networks like Facebook and Twitter. Salahuddin grappled with why the media has not been able to do anything to stem the tide of radicalisation. The answer, he claimed, lies in the dearth of an intellectual community, general inability to analyse the problems of mental paralysis and that ultimate Pakistani malaise: cynicism. It’s time to change direction, said Salahuddin. Unless we do this soon, it will be too late.

Brilliant and provocative as always, Babar Sattar presented a talk entitled “Existing legal and administrative regimes and militant trends.” It sounded like some sort of code. But he made perfect sense of it. Using the kind of honesty one rarely sees; he focused on dispelling popular myths and told a few home truths. Talking about the courts he discussed how one institution can neither be a panacea for all our ills or a lone Ranger effectively ‘fixing’ Pakistan. The courts are neutral arbiters of the law and a conviction is only as good as the case made and evidence presented. The difficult truth Sattar wanted us to swallow is our own complicity. We don’t take the constitution seriously and constantly act in contravention of it. Such behaviour has eroded the value of the social contract between state and citizen. As a result of this, that social contract barely exists. We now see new sets of contracts, between individuals and the new power-brokers. 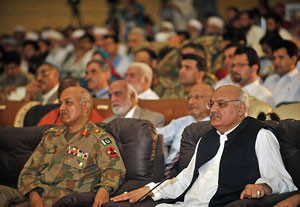 And this is where you clearly see the conflict that defines Swat. Despite its inherent brutality, including public floggings and beheadings, the Taliban regime has arranged to withstand the challenge from the army. The Nizam-e-Adl is still in operation in Swat. The civil system that should be operating there has yet to be put back in place. And thus a parallel system of justice operates under the very noses of those who would like to see religious extremism rooted out.

The downward slide began the moment Swat came under the administrative control of the state of Pakistan. Since then, the state has failed to realise that the army cannot perpetually keep an unnatural peace in the area. Peace must be organic and it must be sustained. For that to happen, the civilian government must step up, strengthen its presence and do some real work. It must show serious interest in responding to the terrorist threat as the military cannot and should not act as an occupation army. To govern, to turn things around, the government needs legal authority and the mandate of the people. It gained their support immediately following the army operation against the Taliban, but it failed to tap that support; today, it is gone.

The army may line the roads and ensure that convoys of visitors can travel safely from their hotels to conferences and de-radicalisation centres. You note the sharp-shooters on the roofs and feel safer with them around. But this is not the answer. The de-radicalisation centres are doing an excellent job, but they cannot solve the problem of radicalisation. And the talking shop par excellence that brought so many different experts together, all of whom had so much to contribute, did not look at the real issue: the development of a programme to de-radicalise the entire country, including the armed forces. The first thing the military needs to do is undertake a little introspection. Let the civilian forces examine their own problems. The problem with Pakistan has always been the military examining the civilian sphere, but never its own. Until it does so, seminars and centres will not solve the problem.

Four days in a controlled environment may not be the best way to figure much out, but it certainly gets you thinking and talking to all kinds of people. Sifting through all that information leads to the very scary realisation that, forget unfolding, the story is yet to happen. As they say, it’s a great violent force that knocks the universe out of tilt and that great violent force is there and ready.

This article was originally published in August 2011 issue of Newsline under the headline “The Swat Conundrum.”