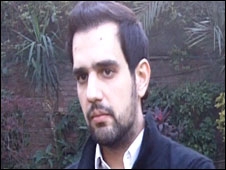 Shahbaz Taseer, a son of the late Governor of Punjab Salmaan Taseer, was kidnapped in broad daylight in Lahore on Friday.

Reports state that Taseer’s Mercedes was intercepted by more than three men in a black Land Cruiser as it drove down a street adjacent to MM Alam Road, where Taseer works at brokerage house First Capital Securities, Ltd, as its Executive Director.

The motives for the kidnapping are unclear. Taseer is certainly wealthy and well-connected, often the criteria on the basis of which mafia factions decide who to kidnap. But eyewitnesses have told various television channels that an iPad, three mobile phones and a weapon were thrown out of the car. This raises questions about whether the kidnapping has actually been done for financial gain.

A key factor could simply be Taseer’s surname. His father, Salmaan Taseer, was brutally murdered by a member of his personal security detail early this year. That killing, it was quickly established, was inspired by the idea that Taseer was somehow betraying Islam in his attempts to fix Pakistan’s overly stringent blasphemy laws.

Numerous religious clerics refused to read the funeral prayers at Taseer’s funeral, and various judges refused to try his killer, in fear of retribution. The idea that Taseer was in the wrong has slowly spread and gained social acceptability among the more right-wing, while progressive elements mourn and hail him as a martyr.

This backdrop suggests that there could to be more to Shabaz Taseer’s kidnapping than the pursuit for ransom money that has inspired kidnappings across the country. Shehryar Taseer, the brother of the kidnapped man, has told Reuters that the Taseer family “has been receiving threats from the Taliban and extremist groups.”

Also significant is the role of Shehrbano Taseer, Shahbaz’s sister. She has become increasingly prominent as a journalist for Newsweek Pakistan a figure around whom progressive forces rally. This means that the Taseer family remains somewhat in the spotlight.

In a sad and ironic twist, security was withdrawn from the Taseers just days ago, presumably because the powers-that-be felt they were no longer at risk.

After this kidnapping and that of American citizen Warren Weinstein, some now question whether Lahore is safe for anyone extremists may want to target. Human Rights Watch representative Ali Dayan Hasan has stated that the kidnapping evinces a failure of the state to establish its writ.

For now, what will happen to Taseer anyone’s guess. Prime Minister Gilani has spoken to Shehrbano Taseer and pledged to do whatever it takes to recover her brother safely. The family and much of the nation awaits news with bated breath. Twitter is awash with sympathy. The Pakistani online community seems to have rallied to send out a message of support for the beleagured Taseer family. But the message that would matter most at this point would be one that reveals where Taseer is and whether he will be returned to his family safely.

Rana Sanaullah, the law minister of Punjab, just released his own statements. According to Sanaullah, the Taseer security escort was not withdrawn some days ago, as earlier reports indicated. He claims that Shahbaz Taseer simply chose to travel without security on a regular basis. Whether this is true or simply a sign of the government trying to pin the blame elsewhere remains unclear.

Sanaullah told the media all entry and exit points in Lahore are under scrutiny. In his view, Taseer will be back home soon.

Meanwhile, some citizens have come out with statements that protest the amount of attention being given to the Taseer kidnapping in light of the general disorder in Karachi and elsewhere. Those who challenge such views talk of the Taseer family as gaining a special significance in Pakistan following the gutsy stance they have taken on the blasphemy law and the right of minorities.