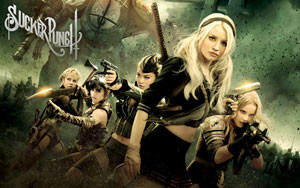 Four salacious warrior girls in risquÃ© leatherwear, with the lead in schoolgirl uniform fighting demons with heavy artillery, are enough to reel in male audiences. But this is no Charlie’s Angels. Zack Snyder’s previous projects 300 and Watchmen were intriguing enough to put Sucker Punch at the top of your ‘movies to watch’ pile ­— despite the disappointing reception.

This part sci-fi flick, part action-thriller opens with the death of Baby Doll’s (Emily Browning) mother, leaving her and her younger sister at the mercy of their lecherous stepfather. In a cruel accident, Baby Doll accidently shoots her younger sister and is admitted to a mental institution, Lennox House. Following a devious under-the-table agreement between a corrupt warden (Oscar Isaac) at the institution and her stepfather, Baby is scheduled for a lobotomy in five days. Co-written by Steve Shibuya, Sucker Punch erodes the space between reality and fantasy as pronounced in its tag line: “Reality is a prison, your mind can set you free.”

Trapped in a cold, gothic mental institution, Baby Doll’s only weapon against the insidious warden is her mind. Beleaguered by her painful reality she retreats into an alternate realm, a second reality where she and her friends, Rocket (Jena Malone), Sweet Pea (Abbie Cornish), Blondie (Vanessa Hudgens) and Amber (Jamie Chung) are prostitutes in a brothel with a Moulin Rouge-like boudoir. Their dance teacher (Joanne Davidson), a doctor at the mental institution, tells them “their fight for survival starts now.”

Baby Doll has the unique talent of dance and entrances her audience into a state of stupor as she is sucked into open combat in a third realm, on a quest to fight her way to freedom. Each vision is a mission for survival and the five keys, Map, Fire, Knife, Key and a mystery fifth are the goal in combat that will set the girls free. How they engineer their escape is where the potholes start to appear as Snyder grapples with the overarching storyline. German zombie soldiers, highly engineered robotic armies and armoured monsters encounter the girls at different stages, and they quite literally kick ass, Kung Fu-style. A wise guy who delivers clichÃ©d quips — “Don’t write cheques your mouth can’t cash” — also delivers the rules of the game in the battlefields, but plays no role of significance in the plot.

Oscar Isaac, with his scheming and his manic outbursts excels in his role, scaring the girls to tears. Abbie Cornish and Malone deliver convincing performances, while Chung and Hudgens remain mostly in the background. The allegation of misogyny levelled against the movie, though, is both absurd and overly analytical, and Snyder’s pet project, in the pulp genre, should be admired for its bold thematic value that breaks away from Hollywood convention.

This movie review was originally published in the August 2011 issue of Newsline under the headline “Girl Power.”