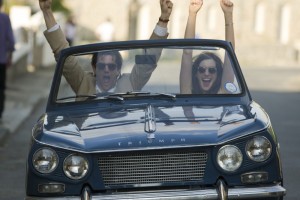 David Nicholl’s bittersweet love story One Day is a phenomenally successful novel. Now the film adaptation is out to capture its sentimental charm.

It often seems as if the book-buying public can be divided into two sections: those that have already scrambled, laughing and sniveling, through David Nicholls’ One Day, and those that have it on the top of their must-read list. It’s all over England: on trains and in waiting rooms, in cafÃ©s and shopping centres, people of all ages bent over a novel with a distinctive orange and white cover. There’s a fair chance they will be chuckling helplessly, or silently wiping away a tear. Rest assured, they won’t be immersed in the world around them.

The story features the magnetic but ineffectual Dexter and decent, self-deprecating Emma who go from a bumbling one-night stand as university students in 1988 through twenty years of romance, friendship and heartbreak. With more than 1 million copies sold since the novel’s 2009 publication and over 600 days (and counting) spent on the Amazon top 100 bestseller list, One Day is clearly a phenomenon. In a publishing world monopolised by the Swedish wunderkind Stieg Larsson and the Americans Dan Brown and Stephenie Meyer, it has made it on to best-seller lists through word of mouth alone. There’s been nothing like it since Captain Corelli’s Mandolin.

Now that One Day is set to hit cinemas this month with Hollywood starlet Anne Hathaway (not many people’s idea of a mousy Northerner) and rising British actor Jim Sturgess as the most iconic “Will they? Won’t they?” pals since Harry and Sally, it may all appear to be an ingenious design towards universal supremacy.

The conceit of One Day is artful. The idea of profiling a single day, July 15 (St Swithin’s Day), each year across two decades of coulda-shoulda-woulda close calls and starts, from wretched near-misses to fortuitous sidestepping, is a gripping one. Here comes July 15, chapter after chapter, with life, love and suffering at maximum speed.

It could be problematic, but ends up being a wonderfully evocative design, proffering a series of vivid snapshots of a relationship. In an interview with The Telegraph, Nicholls has said that he wanted to “create the impression of looking through a photo album, so that the characters seem to change, yet remain the same.” He explained:  “Twenty years is a substantial sprawl, so my initial instinct was to cover landmarks — births, marriages, deaths. Instead, I’ve taken one day at random — like a date on a bank statement.”

Still, it’s likely that it is not the unique format that has made One Day a publishing phenomenon. It’s the fact that it appeals equally to men and women, with comedy and romance intertwined. Nicholls is a master of irony – there is no mushiness, no ranting, nothing Mills & Boon-ish. Actions are left to speak for themselves and the emotions, to put it lightly, are a bit of a wreck. Nicholls’ idea of one day over 20 years for two people is what makes One Day clever, to be certain, but the way Dexter and Emma’s journeys come to resonate is why One Day matters.

While it’s true that the movie version of such a universally loved book will have an automatic audience, that is not without its potential barriers. The 30-year-old Sturgess is stunned by the weight of expectation placed on his shoulders: “I wasn’t aware of the whole phenomenon at first,” he explains to The Times. “Then I started seeing this orange book staring at me everywhere I went. I thought, ‘this is big.’ I got talking to a woman at a barbecue and she was asking, ‘Oh, you’re an actor? Are you working?’ I said I was shooting a film called One Day and playing this guy called Dexter. She stopped, gave me this look, and said very seriously, ‘That character is very important to me.’ I realised then that a lot of people related him to someone they knew or desired, and that’s quite scary.”

Hopefully, as with the book, there will be a sense that the film has indeed earned our tears, which are an acknowledgement of the depth of the characters as much as the anguish that comes their way. Just as countless readers have retreated back into the novel to experience once again its intensive emotional workout, so too is the movie adaptation marked out to become one of those weepies that keeps on giving. Call it ‘the Titanic aftermath’ or ‘the love-story effect’: every generation has its classic tearjerker. All signs motion that One Day will be emotional and cinematic catnip to millions of viewers.