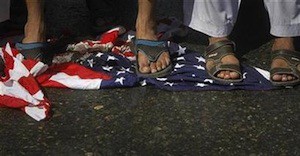 Various news reports on Sunday revealed that the Pakistani government has decided to “restrict the movement of [American] diplomats [within Pakistan].” Sources from within both the US Embassy and the foreign ministry confirmed this new vigilance towards American diplomats, which involves measures that require diplomats to apply for special permission to leave Islamabad five days before their scheduled departures.

The Americans are, it is safe to say, a tad annoyed. One article quotes a US official who told American news channel ABC, “Pakistan has been harassing US personnel working in the country for months.” The foreign ministry is, meanwhile, using that favourite card every Pakistani official loves to trot out — or downplay when Pakistan is called the world’s most dangerous place — to justify whatever extreme measures the government sees fit to implement: security concerns. While a spokesperson for the UK’s diplomatic mission confirmed that “government guidelines [are] now being implemented on travel for [British] diplomatic staff,” few question at which foreign mission this announcement is directed. Objections by the US have already won it some ground: Pakistan has granted a temporary easing of its new restrictions to US diplomats after the Americans reportedly threatened to make the restrictions reciprocal.

No matter how things finally play out in this latest drama, what matters is what this new stringency truly represents: another snub. It is the Pakistani government’s way of trying to ‘win’ one battle (or perhaps simply land a painful blow) in the continuing US-Pakistan face-off. Of course, the ‘war’ is far from over. The flipside of this is the fact that we are ostensibly American allies and, for all our complaining and posturing, quite willing to depend on billions in US aid to help run our economy.

Such petty actions show nothing more or less than a government that is willing to sacrifice long-term stability to score short-term points. Tapping the anti-Americanism that’s now rampant in our country is, for this government, not an ideological move, but a political one. Right now, as the PPP draws flak for its inability to control the chaos in Karachi and the idea of maintaining India as our Undesirable #1 is losing its credibility as a policy, some popular support would presumably be welcome. So the tactic of choice is now a move against America that is, in today’s xenophobic times, automatically seen as a move ‘for’ Pakistan.

Perhaps the PPP has seen just how well anti-Americanism has served everyone’s favourite ex-playboy. But our ruling party would be well advised to be careful about how much they push this angle. Not only does it endanger the well-being of the country at present, which, loath as we are to admit it, needs American help, it fans the flames of a movement that is already spreading its roots at an alarmingly fast rate. Journalist Shireen Mazari’s unprovoked outburst against a foreign couple in June made for some excellent jokes about paranoia. But it also underscored how large anti-American nervousness looms in our collective consciousness. That policies are now being tailored to such fears only strengthens the fervour with which their proponents defend them, without actually providing any further evidential basis for their existence.

Mazari is a highly trained professional who can be expected to behave with some modicum of sensibility. That she thought lashing out in this way was appropriate, or perhaps subconsciously it was some sort of attempt to defend Pakistan, makes one wonder to what extent the many considerably less educated, more desperate crowds that hear such rants on television or at rallies might go to to express their feelings. In the military, soldiers who have been told time and again that they are “Islamic defenders” against the “kaafirs” are now turning radical, much to the nation’s alarm. Make no mistakes about it: an anxious, overly defensive worldview is not going to help this country out of its mess.

Indeed, an increasing obsession with rejecting Western influences might turn many away from the mainstream parties, instead boosting support for what are currently fringe elements. Maybe the PPP itself will eventually be rejected as wishy-washy and Western-influenced. This trend is already slowly occurring in Europe. Xenophobic nationalist parties are making headway against centrists in Scandinavia, France and — the post-colonial’s home away from home — the United Kingdom.

Pakistan raged when the right-wing fundamentalist Norwegian who wreaked so much havoc recently was found to have been motivated by fears of a “Pakistanisation of Europe.” The nation should not then be duped by those who use panic about the Americanisation of Pakistan to win support for increasingly ridiculous assertions. Because the equivalent of rightist Europeans in this country is not one horrifying attack by a disturbed individual amidst fear-mongering talking heads on television. It’s an armed, dangerous group with a conviction that overrides respect for human rights, private property and even the sanctity of life. What the Tehrik-e-Taliban (and the religious parties that support them) could do with a wellspring of popular support, built up in part by politicians hoping to stay in power just a little longer, boggles the mind.

An American overreach is certainly something Pakistan should not abide. It is the government’s job to maintain our sovereignty, and the public is rightly outraged when it fails to do so. But such breaches are exceptions, not the norm the way some would have you believe. America — though no one wants to hear it — probably is not out to get you. In fact, it probably has funded some of the services you still receive.

A responsible government needs to examine the long-term consequences of its actions and act accordingly. And for the PPP right now, that means not subtly fuelling a perception of the US as hell-bent on stealing our nuclear weapons, potentially shipping them off to Israel and killing a couple of thousand citizens while they are at it. The politicians who parrot such predictions are fully aware of how unlikely they are to come true. But if it wins them temporary support, they seem willing to forget how dishonest this philosophy is.

Non-bearded politicos, progressive forces and women (are you listening, Ms Mazari?) would be the first to suffer if radical anti-American zeal becomes the new ruling ethos in Pakistan. And what this country would look like if all American aid were withdrawn does not bear thinking about. Let’s stop punching above our weight and making decisions based on expediency. For the sake of both Pakistan’s future and its present, anyone in a position to be heard must raise their voices against the rise of paranoia, not add to the nation’s burgeoning worry.