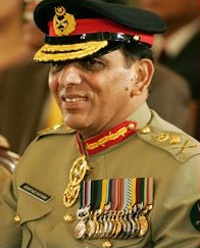 The last few months have not been good for the Pakistan Army.

First it was the US operation that killed Osama bin Laden. Then there was the May 22 PNS Mehran attack. That was followed by the mysterious death of Saleem Shahzad, where it seems the whole country blamed the ISI for the journalist’s murder. But, in fact, there has been more still. The arrest of a serving brigadier, Ali Khan, for his alleged ties to Hizb-ut-Tahrir (HuT), a banned Islamic militant group, confirmed how bad things were within the armed forces of Pakistan. The protectors of the nation seemed to be in disarray, caught off guard, unable to protect even themselves. Infiltrated by militants, or at least infected by a creeping radicalisation, the army has been suffering from a threat from within just like the country as a whole has been.

It’s been a perfect storm. And the storm has battered the armed forces from all sides. So much so that the key supports in the US-Pak relationship have been weakened considerably too.

The nation has been calling for change, accountability and a simple acknowledgment from the establishment that now is the time to review defence policy and the military’s grip on the affairs of the state.

In the July 2011 issue of Newsline we asked: following a wave of criticism, is the army ready for a substantive makeover?

You can read our findings in the articles by Imtiaz Gul, Ayesha Siddiqa, Quatrina Hosain and Arif Rana.

Reinventing Pakistan’s Army
It is time to emerge from the denial about the effectiveness of our defence doctrine and recalibrate our policies to take on the nation’s challenges in a more pragmatic and dispassionate way.
By Imtiaz Gul

Down, But Not Out…
… of politics. Can the army ever be depoliticised?
By Ayesha Siddiqa

The Pakistan Army and its Threat Board
Is the criticism of the army largely justified or misplaced? Is the military adequately focusing on the most dangerous threats to the nation?
By Quatrina Hosain

Interview: Ahmed Mukhtar, Federal Minister of Defence
“The US cannot dictate that the government open up new fronts in Pakistan,” says Ahmed Mukhtar.
By Arif Rana