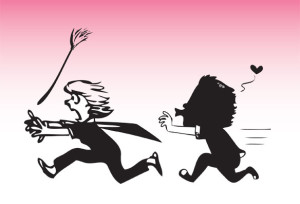 Who knows what’s happening in a hotel room, behind a closed door? The Dominique Strauss-Kahn debacle has hotel managements everywhere pruning their housekeeping policies. The threat of well-connected, important guests abusing their relative power and taking advantage of hotel staff has been highlighted like never before.

The risk is even greater in Pakistan. Principal among the reasons for this is the massive class divide between poorly (if ever) educated housekeeping staff and the guests they are employed to serve. Mutual understanding rarely manages to bridge the gulf quite as well as snobby disdain and nervous awe do. Much lower expectations about the dignity of labour contribute as well. ‘Service’ to some guests means anything and everything they could ever ask for, offered up willingly and subserviently.

That means a massive amount of social pressure is simply an occupational hazard of the job. Tie in rampant gender discrimination, and the clear conclusion is that women in the industry face a double disadvantage. Government efforts to protect working women have ostensibly been stepped up since the passage of the Protection Against Harassment of Women at the Workplace Act in 2010. But legislation is often nothing more than words on a piece of paper in this country, and so female hotel workers may remain especially vulnerable.

Leading hotels are aware of what is at stake. Riaz-ul-Haq Baloch, currently Executive Housekeeper at the Marriott in Karachi, does not mince his words on the issue. He recounts an assault he dealt with first-hand at an unnamed five-star hotel he worked at in the late 1980s: “A guest came up to [my worker] and, quite simply, pounced. [The worker] came running back to my office, clearly distressed. I told [them] not to worry…It’s something they have to be prepared for.”

What is significant is who needs to be prepared. The guest in question was a middle-aged woman, the staff member a 19-year old male working his first job.

Discussions with various training managers at both leading and (in the words of one disgruntled and/or excessively honest employee) “mediocre” hotels revealed that the Pakistani hotel industry pre-empted scandals like the Strauss-Kahn fiasco by simply using a preventive measure. As one source revealed, “80% of the housekeeping staff in most hotels is male.”

The logic behind this decision is simple. Hotel managers seem to believe that male housekeepers, despite incidents like the one described above, are generally less likely to be assaulted and more capable of dealing with the situation if they are. This means that few women are employed in housekeeping staffs, and they are usually only sent to rooms with female guests. Safety precautions for such women include video cameras in the hallways, having supervisors come up to rooms with them and carrying walkie-talkies.

Still, hotels remain leery. “These things happen,” says one manager who wishes to remain anonymous, a tired note in his voice.

Precautions, admirable as they may be, indicate not a lack of sexual harassment but an awareness of how likely its occurrence is. None of the housekeeping managers interviewed denied that they had witnessed such incidents during their tenure, instead mentioning them briefly and hurrying to a different topic. A clear thread running through interviews with managers at various hotels was a protectiveness towards the housekeeping staff, especially women.

Even the male-centric solution may sometimes fail. A recent article in the Indian magazine Outlook noted that Indian hotels see “incidents… involving the male staff once every two to three months.” In Pakistan, where the gender ratio among the housekeeping staff is evidently highly skewed, the frequency of such assaults would inevitably be higher. Whether one will ever know is uncertain. Many male staffers refuse to bring up such encounters, afraid of losing face or reluctant to admit vulnerability to anyone, female or male predators.

Worry now even overwhelms the old philosophy of always providing ‘service with a smile.’ The Marriott’s Baloch summed this new attitude up best: “It’s not ‘the guest is always right’ anymore. It’s ‘the guest is a guest — nothing more.’” While the initial reaction to an abusive or angry guest is to attempt to mollify them, a call to someone further up in the management hierarchy is recommended for when situations get out of hand. In Pakistan, it’s the guests that need to be convinced to conform to a certain standard of behaviour.

Sexual harassment was only made illegal in this country last year. Awareness about the issue can only have gotten so far. It seems almost impossible that Pakistan will soon reach a point where issues like male guests attacking male staff can be discussed openly and freely, without Ahmadinejad-inspired statements about “there [being] no homosexuals in our country.” And respect for women as equals, not tokens trotted out to smile at customer relations desks or easy targets, remains low. It is not policies that need to be changed, but mindsets. Until then, businesses, particularly hotels, will continue to tailor their practices to their very real fears.

This article was originally published in the August 2011 issue of Newsline under the headline “Call of Duty.”