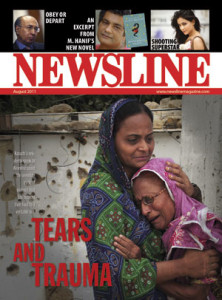 From the callous manner in which the stakeholders of this city have been operating to further their own selfish designs, that is beginning to seem like an elusive dream.

The city has been turned into a virtual war zone, with killings, burnings and lootings taking place every day. The assassins kill with impunity and disappear into the darkness of the night. The law enforcement agencies appear helpless — and the government clueless.

Four violent days and 200 killings later, Federal Interior Minister Rehman Malik holds jealous girlfriends and wives responsible for 70% of the murders. If this was the federal minister’s idea of a joke, it was in bad taste. He then proceeds to talk about the origin of the weapons as being Israel. Not another conspiracy theory, please.

The president and the prime minister talk incessantly of bringing the culprits to book and fly off to cooler climes, at state expense, to escape Karachi’s raging fires. The culprits, meanwhile, continue to proliferate.

The provocative manner in which the MQM’s exit from the government was handled shows a total disregard for the volatile nature of the city’s problems. Firstly, the PPP decided to disband the local bodies and introduce the commissionerate system with immediate effect — a sore point with the MQM. Next, they brought MQM’s nemesis Zulfiqar Mirza back to the PPP fold. Mirza, as a first step, met with the MQM’s arch rival, Afaq of the MQM-Haqiqi, in prison. Then, in a drunken state he heaped scorn on the MQM chief and all Mohajirs to boot by calling them “bhooke nangay”; subsequently, he proceeded to defend his act of visiting Afaq and tendered a half-hearted apology to any Mohajir who found his remarks “offensive.”

Unfortunately, while every political party lays claim to this city — it is, after all, the goose that lays the golden egg — not one of them is making any serious effort to find a solution to its multiple problems that have led to the shutdown of industries and the flight of capital from Karachi.

The fires of revenge are still raging. On August 1 alone, 27 people had been gunned down and several houses, shops and vehicles torched — a testimony to the uneasy peace that prevails.

The city fathers know what ails Karachi. It is the political parties with their heavily armed militant wings who are fighting like vultures to wrest control of the country’s economic hub. They have managed to divide this city, its hospitals, its schools and, worst of all, its people along ethnic lines. Parts of Pakistan have become no-go areas for Pakistanis because of their ethnicity. And it’ll take much much more than a peace rally, where battling foes the ANP and the MQM, band together with the PPP for a day to bring peace to this traumatised city.

Look for your copy of the August 2011 issue of Newsline on newsstands now.