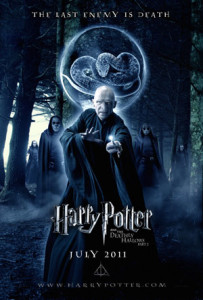 With the eighth and final Harry Potter film, Harry Potter and the Deathly Hallows, Part 2, a much-loved saga the world over comes to an end. With clever nods to earlier films and some exciting, magical sets, this film does justice to the decision to split the last book into two parts. Having said that though, this one is a very worthy finale if seen within the entire range of Harry Potter films, but as a stand-alone film it might not be as fulfilling.

Part 2 starts off just where Part 1 ended: Lord Voldemort, played with chilling accuracy by Ralph Fiennes, is now in possession of the Elder Wand, which he stole from Dumbledore’s tomb. The Elder Wand is part of the Deathly Hallows, which, as explained in Part 1, are three magical objects that make the one who possesses them Master of Death. The other two are the Resurrection Stone and the Invisibility Cloak.

The early scenes in Part 2 build up the tension for the first, full-throttle sequence in Gringotts bank. Here, the trio Harry, Ron and Hermione set out to retrieve the cup of Hufflepuff, which is hidden in Bellatrix Lestrange’s vault. The story then shifts to Hogwarts, where the friends reunite with fellow wizards and witches such as Neville Longbottom, who this time round is a more central character. In Hogwarts we learn that Severus Snape is now headmaster. His is a rule built on fear, but there is a shocking revelation about him later on in the film which puts all the previous films into perspective.

While Voldemort riles up his Death Eaters for an attack on Hogwarts, Harry and his friends are in pursuit of the remaining Horcruxes; fragments of Lord Voldemort’s soul which, if found and destroyed in time, will diminish his powers. After an early confrontation between Harry and Snape, the remaining film is about how these Horcruxes are located by Harry while the Battle of Hogwarts is running parallel, and claiming the lives of those on either side. Ultimately we get to see the climax that everyone had been waiting 10 years for — the final duel between Lord Voldemort and Harry Potter.

Two things are clear half-way through the narrative. Firstly, this is not a children’s film anymore, but then, the previous films had already shifted their tone and become darker. Secondly, it’s not only about Harry anymore: all the other characters are equally part of (t)his story. Everyone gets their moment and everyone serves a purpose, whether it’s Professor McGonagall, Snape or Neville.

The film stays very true to the book and everything is clearly laid out, which is not an easy task given that there are so many complex characters and situations. In that respect, screenwriter Steve Kloves triumphs. The only minor issue is the ending: after the final duel, everything is wrapped up far too quickly. One might get the feeling that something’s missing. Nonetheless, if one looks at all the films in sequence, then this ending will probably not disappoint fans of the book. Just as in the book, fast-forwarding the film 19 years into the future holds great sentimental value and we realise that Harry Potter, the boy we were all acquainted with some 14 years back, has finally grown up and come of age.

This movie review originally appeared in the August 2011 issue of Newsline under the headline “Potter Comes of Age.”