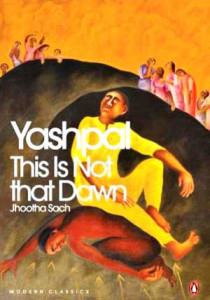 These poverty-stricken masses otherwise had little say in the political bargaining that took place in the corridors of power. It was there that the post-Independence power structures were shaped that determined the future of India and Pakistan. Yet the people were the ones who paid the price by suffering the pain of massacres, displacement, destruction of property and homelessness that accompanied Partition.

Yet the writing on Partition has predominantly focused on the goings-on in the highest quarters. Political analyses, commentaries, memoirs and political biographies do not have much to reveal about the impact of 1947 on the lives of ordinary people. As it is, the history of the people — especially in Pakistan — has remained an untold story. It has been left to some feminist and fiction writers on both sides of the border to probe into this aspect of the phenomenal events that ushered in two new dominions in the Indian subcontinent.

India has produced more fiction on Partition. We have our share too in the short stories by Manto, the novel Zameen by Khadija Mastur, Bano by Razia Butt and some others. They have effectively captured the poignancy of human suffering in 1947. But as Professor Harish Trivedi writes in the introduction to this book, for half a century Hindi readers have been of the view that Yashpal’s Jhootha Sach (literally The False Truth) has been the greatest among the novels written on the partition of the subcontinent.

It records history through the eyes and experiences of a huge cast of characters who lived through that period of trauma, hope and rising expectations. They resided in Lahore before they were driven across the border to be scattered in Delhi, Lucknow and Jullunder. Yashpal completed his magnum opus after painstaking research in 1958 when the wounds of Partition were still raw.

Now translated into English as This Is Not That Dawn by son Anand, it has reached a wider audience and should create waves in the English-speaking world. The original book was in the Devanagri script and was inaccessible to Pakistani readers. Anand’s elegant translation, which reads smoothly and captures the ambience and cultural nuances of the various places where the story is set, should attract people in the Punjab and bring back nostalgic memories to the older readers.

Yashpal, who was born in Ferozpur, lived in Lahore until his revolutionary and anti-British activities, which included blowing up the viceroy’s train in 1931, landed him in prison. Released in 1938 by the Congress government, he was banned from the Punjab. He managed to visit Lahore clandestinely once in this period, but it was only 17 years later that he could visit his beloved Lahore legally when he stopped there en route to Moscow in 1955. He later wrote, “I felt constantly agitated. My Punjab and Lahore were gone; could not one person preserve even a memory of them? And the anguish of penitence at the folly of collective madness due to communal ill will?”

That is how Jhootha Sach was born in the mind of its author. As is characteristic of Yashpal’s work, he focuses on revolution, gender issues and romance. As a Communist, he is anguished by the injustice of class inequities that are portrayed in the story. Divided into two parts — the first part is called ‘Homeland and Nation’, while the second is ‘Future of the Nation’ — the book spans the period stretching from the early ’40s to the mid ’50s. It is the story of a simple Hindu community that lived in Bhola Pande’s Lane near the Shahalami Gate in Lahore. Their daily chores, quarrels, romances, friendships and jealousies are described in detail.

It is a story of Tara Puri, who rose from her mundane surroundings to break conventions and go to college, while her brother Jadaiv landed up in jail for his revolutionary student politics. But for the simple folks living in Bhola Pande’s Lane, there was no distinction between them and their Sikh and Muslim neighbours. Tara, herself a Hindu, was in love with Asad, while being a part of the Students’ Federation which stood for a united India, and Hindus, Sikhs and Muslims intermingled and supported the same cause.

When the confrontation between the Muslim League and Congress at the leadership level seeped down to the grassroots, communal riots shook the simple lives of the denizens of Bhola Pande’s Lane. Religion became a dividing factor and bigotry and hatred drove a wedge between the various communities. Tara was told twice, “You will not be able to live in Lahore if you call yourself a Hindu.”

But the future didn’t appear too bright as the Lahorites trudged across the border to India. Many evils that are abhorred by Yashpal, the revolutionary, had begun to crop up in the new country that had won a brave freedom. That is why Yashpal titled his novel The False Truth. In the English edition, Faiz Ahmad Faiz’s verse, as translated by Syed Shahid Ali, sums up the betrayed hopes. “This is not the dawn for which ravished with freedom we had set out in sheer longing.”

A feminist at heart, Yashpal is at his best when detailing the miseries inflicted on women of all castes, creeds and faiths. There was the abduction and rape of Tara at the time of Partition by the drug addict Nabbu and her abuse during her confinement in the brick house in Sheikhupura. Aware of the social norms, she did not return to her family when she was rescued by the Indians. However, she overcame her personal trauma and rose to new heights in her professional life. Then there is Banti, who was separated from her family and sexually abused. She searched high and low for them, only to be rejected by them when she finally traced them out. She could not bear the shock and banged her head, again and again, on the threshold to end her life.

Extremely objective and totally non-communal in his approach, Yashpal suffers equally when injustice is done to the Muslims. The Sikh driver carrying Hindu refugees to India remarks, “If you are a ‘have’ you are a Hindu. If you are a ‘have-not’ you are a Muslim.” Another observation he makes is, “Hindus have been looting and robbing the Muslims for centuries.”

Anand dedicates the book to the memory of his mother who was very keen to see this work translated into English. Prakashvati herself would have been pleased by her son’s efforts especially because nothing has been lost in translation.

This book review originally appeared in the August 2011 issue of Newsline under the headline “Through the Eyes Of the Scattered.”