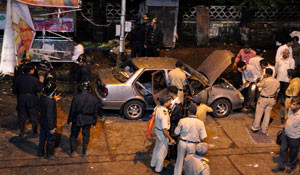 A day after the July 13 serial blasts in Mumbai, I spoke to Jayesh Labdhi, a key member of the Mumbai Diamond Merchants’ Association. This Mumbaikar was present near the blast site and had swung into rescue operations after a bomb tore through the neighbourhood of his office. He saw dismembered bodies strewn all around and bloodied people running for their lives.

Labdhi was furious, but his anger was not directed against any community or extraneous force, but against the Indian politicians. He, like many other Mumbaikars, scoffs at the famed Mumbai resilience after every bombing in the financial heart of India.

India’s Prime Minister Manmohan Singh vowed to bring the perpetrators of the attacks to justice, but there were no takers for his routine remarks.

Opposition parties of India and security analysts viewed the attack on Mumbai more as a government failure to fight terror, rather than an intelligence failure. “The government can never contain terror at its delivery point. It should have a nationwide network to stop its origin in what may be some small mofassil town,” says counter-terrorism analyst Ajai Sahni.

But whatever the reasons behind the blasts, the residents of Mumbai are livid.

“Our life is cheap. We are taken for granted and after every attack, as we go back to work driven by the compulsion of livelihood, the politicians pat us on the back and call it the Mumbai resilience,” says Labdhi.

Labdhi did not hide in the relative security of his office as he heard the explosion. Instead, he rushed out to rescue the victims as the bomb ripped through Opera House, the upscale hub of the diamond trade in south Mumbai.

“I still can‘t forget any of it. I heard the sound and rushed out. I found severed bodies littered all over and many people in a bloodied state were running in panic and pain,” he recalls.

“There was no security for us. The area was a haven for illegal car parking, despite two previous attacks — in 1993 and 2003 — that killed many,” says Labdhi. “Do we have a choice but to be resilient?” asks Labdhi, who went back to business the next day, after counting 13 bodies at the blast site.

The blasts, which are being blamed on a homegrown Islamic group called Indian Mujahideen, did not spare Muslims either. Terrorism is a great religious leveller when it comes to casting its dark shadow of death and destruction. One of the diamond traders killed in Opera House was 26-year-old Asghar Mohammed.

“He was very young. He got married two months back,” said his stoic father Faiz Mohammad, as he prepared for the funeral. After a long hiatus caused by the 2008 Mumbai attacks, India has resumed talks with Pakistan on all contentious issues, including the Kashmir dispute that triggered three wars between the two nuclear-armed neighbours.

With the blasts failing to derail talks between the two foreign ministers of India and Pakistan in New Delhi, which began on July 27, or even provoke a war of words like in the past, it was a big ‘thumbs down’ for the terrorists.

And so life goes on in India’s megalopolis, perhaps one woman’s pain of losing a husband of two months remains muted in the din and bustle of an unforgiving city. The tears of one faceless Salma perhaps got lost in the raindrops that ceaselessly pounded the city after the blast, washing away the blood on the streets. 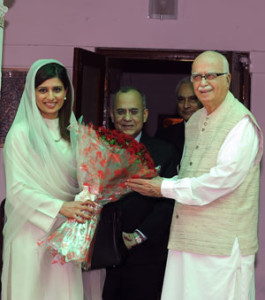 She breezed into India’s national capital, and the “sexist” subcontinent media ensured that her Roberto Cavalli sunglasses, her Birkin bag and her understated pearl jewellery earned her the front page spot in every Indian newspaper. Her attractiveness, confident gait and the shining monotone shalwar kameez reminded the Indian media and the people at large of the Benazir Bhutto of yesteryears. Hina Rabbani Khar’s young age and glamour quotient won her many headlines in the leading dailies in the morning following her arrival. From “Hina looks to conquer” to “Hina versus he? Hell, no” (the ‘he’ refers to India’s aristocratic and nearing-his-80s foreign minister, S.M. Krishna). India’s tabloid press used expressions that were more Bollywoodish and crass — and have been out of circulation in the context of something as serious as India-Pakistan talks.

But while the buzz around Hina Rabbani Khar was her charm and fashion statement, the analysts say there were not many takeaways for India from the talks.

While Khar claimed a change in mindset on both sides in taking the talks forward as she studiously avoided making provocative statements (something this time both sides agreed to mutually as Confidence Building Measures), the Pakistani foreign minister’s meetings with Kashmiri separatist leaders did not go down too well with the Indian authorities and mainstream media. But a few scathing posts aside, for once, both the mainstream media and the government did not make any big fuss about it. The reporting was sober, factual, objective and so was the response of the Indian external affairs ministry. Khar herself acknowledged that the Kashmir issue was raised during the talks, but it was not raised in a manner that made her or her host uncomfortable.

Coming back to the takeaways, I would not say that there were none. Compared to the previous meeting in Islamabad last year — between the same Krishna and former Pakistan foreign minister Shah Mahmood Qureshi — this one was much more cordial and conducive for moving ahead. Everyone remembers the near public spat at a joint press conference in Islamabad last year and the rhetoric on both sides. Hina Rabbani Khar says “the mindsets are changing.” But only time will tell if indeed what the two ministers said at the beginning of a new era is not caught in the platitudes of the past. The overriding concern in the Indian media is whether what Hina Rabbani Khar says has the approval of Pakistan’s powerful army bosses.

Filmmaker Zoya Akhtar, daughter of the famous poet and lyricist Javed Akhtar, is getting better by the day. After Luck By Chance, her first film revolving round the bizarre realities of Bollywood, she has churned out an entertainer that is philosophical without being didactic. Zindagi Na Milegi Dobara (ZNMD) rocks. ZNMD, as the name suggests, is a tribute to life through the transformation of three friends on a road trip in Spain before one of them gets hitched. The film has all the feel-good factors of a Bollywood entertainer — good looking actors, superb performances and exotic locales. From the compulsive beauty and easy grace of Katrina Kaif to the magnetic charm of Hritik Roshan and the antics of two nonchalant super dudes of the thinking man’s Bollywood, Farhan Akhtar (Zoya’s brother) and Abhay Deol, ZNMD grows on you as you watch the movie. After watching a late night show, my younger friend suggested that we go for a drive immediately to celebrate the film’s spirit. We did, and perhaps therein lies Zoya’s real accomplishment. She managed to deliver a film with so much entertainment value, alongside an equal amount of food for thought.

It is a season of male bonding in Hindi cinema and, for once, clichÃ©d gay jokes are kept out of the fray. If ZNMD is sombre and sane, Aamir Khan’s production Delhi Belly — a tale of three struggling roomies in an odiously surreal Delhi shack — surprises with its shock value. But the thriller element and the pace in the film — directed by Abhinay Deo — makes it enjoyable for a section of the audience. Another section may be repelled by its slang and muck. “A daft but oddly enjoyable Bollywood farce about diamonds and bowel movements,” writes The Guardian in its review of the film, which has a storyline that entwines a diamond chase of smugglers with the bowel movements of one of the three young protagonists. Even the heroine in the film speaks on the phone while seated on a commode.

ZNMD and Delhi Belly are varied in treatment, style and approach, but somewhere down the line, the two films connect for one reason: they showcase the two new faces of Bollywood.

This article originally appeared in the August 2011 issue of Newsline.