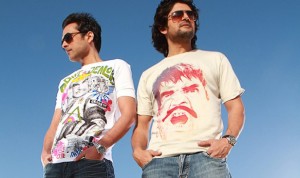 Uth Oye! is an increasingly popular t-shirt company known for designs that poke fun at Pakistani society in the most patriotic of eyes. They’e dekho-ing, but with pyaar.

Work like Uth Oye!’s is now popular among frustrated young creatives. Babar Rashid Khan, the brand’s co-owner, aptly explained the motivations of his and his peers in an exclusive interview with Newsline:

“A few years ago, we were playing an Xbox shoot-em-up game where one of the missions was labeled ‘Karachi’. We figured one of the most popular video games of all time would get their topography right. But no. ‘Karachi’ had street signs in Arabic and a sand-dune-filled background. Then we saw Anil Kapoor on the show 24 as the Muslim president of a nuclear-armed country in the Middle East that was experiencing a military coup. And let’s not forget the baddie in Iron Man who spoke Urdu in the first scene, or the agent who asks the title character of Thor if he received any of his training in Pakistan….we haven’t done a good enough job of promoting a feasible image of [ourselves] as a country. We [at Uth Oye!] felt the need for a movement that could act as a tiny counterbalance and hopefully inspire others to look inwards. Collectively, maybe all of these initiatives can start ‘branding’ Pakistan in a positive global light.”

Witty t-shirts may not address the ground realities that Pakistan paranoia is rooted in, but they’re a great way to counter such panic in today’s capitalist, gotta-love-the-small-entrepreneur world. And they help tie in those nearing the point where they want to abandon their heritage completely. If wearing one’s Pakistani heart on one’s sleeve (or torso, as the case may be) is suddenly more ‘in’ than abaya-like kurtas, even the most jaded might find their inner crescent and star.

Read more about Uth Oye! and other clothing brands that promote Pakistan in a positive way in Newsline‘s August issue.