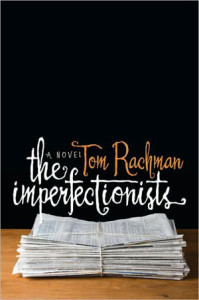 The Imperfectionists, is all about: the fiercely competitive world of newspapers, the dwindling circulation figures and the unquestionable loyalty meted out by the seasoned and not-so-seasoned journalists to this deeply neurotic profession.

Rachman, who is a former International Herald Tribune staffer, weaves the story around 11 characters, all of whom are associated with a prestigious albeit unnamed English newspaper in Rome. The 12-page paper, set up in the ’50s by a somewhat peculiar American businessman Cyrus Ott, boasts an impressive line-up of editors and reporters, and remains popular among die-hard newspaper enthusiasts (or readers, call them what you will). However, readership is on the decline since subscribers are either getting old or are dying, and it is against this backdrop that the 11 characters of the story are found struggling, both personally and professionally. Notable among the characters are Lloyd Burko, an old reporter struggling to sell his story pitches to editors; Arthur Gopal, a less-than-ordinary obituary writer who excels at procrastination and has hardly been published, and Herman Cohen, the anal corrections editor, notorious for circulating nasty memos among the staffers for failing to edit and proof mistakes. And then there are others such as Kathleen Solson, the editor-in-chief of the paper who is considering to give her cheating husband a taste of his own medicine by having a fling; Ruby Zaga, the 40-something year-old, terrified of being a lonely copy editor who’d much rather check into hotels at New Year’s Eve than be home by herself; Craig Menzies, the news editor, who learns of his girlfriend’s indiscretion through a mass email circulated to all staffers; and the painfully disinterested publisher, Cyrus’s grandson Oliver, who cares about one thing and one thing only — his dog Schopenhauer. As expected, Oliver is averse to reading his own newspaper and thinks that the only possible use for it is to serve as a food tray for his canine friend.

To say that Rachman’s writing is witty and true to life would be an understatement. He is hilarious to say the least and has paid a considerable degree of attention to the miniscule details that make the newspaper business what it is. Consider, for example, Cohen, the mercurial corrections editor and a stickler for perfection, who lashes out at his staffers every day for some inexcusable error that they have overlooked: “If none of you nitwits knows what GWOT means, then why is GWOT in the paper?” This is as real as it gets, as any journalist will tell you that there is at least one such editor at a given point in any given paper who’s prone to imploding over misspellings and the works. And then there’s the part when a ditzy American trying to clinch a stringer job abroad blurts out how he feels about Cairo without even realising it: “Well, the air is kind of hard to breathe in, with all this pollution. Sort of like inhaling from an exhaust pipe. The heat makes me faint sometimes. And the food isn’t all that edible. Or maybe I’ve just been unlucky. Also, it’s a police state, which I don’t love. And I get the impression the locals want to shoot me. Only when I talk to them, though. Which is my fault — my Arabic is useless. But basically, yeah, it’s really interesting.” Vapid, much?

The Imperfectionists may suffer from feeling a bit like a short story collection at times given that each character’s story can stand on its own, but Rachman has ensured authenticity that will receive instant recognition as far as those associated with the profession are concerned. It is perhaps for this reason that the readership may be slightly limited. Nonetheless, The Imperfectionists is a profoundly funny, bittersweet take on the newspaper business and those involved with it.

This book review was originally published in the August 2011 issue of Newsline under the headline “The Devil is in the Detail.”