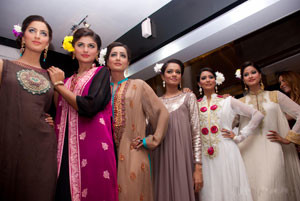 Zeenat Saeed Ahmed, the owner of Taneez, has now launched Emporio Taneez – a bigger and better version of Taneez – next to Gul Ahmed’s Ideas in Clifton, Karachi. This lavish store features ready-to-wear lines from the leading designers of Pakistan in addition to the well-established range of silverware in the form of jewellery and household items that Taneez is so well known for.

The two-storey outlet displays the jewellery and household items on the ground floor, while a spiral staircase leads one to the first floor, which is a haven of designer clothes by Umar Sayeed, Shaiyanne Malik, Umar Batul, Mehdi, Nomi Ansari, Unbeatables, Fnk Asia and Amir Adnan. Three new designers make their debut at Emporio Taneez: Kokab Zia, Nazish Luftullah and Raffael. Says Zeenat about Kokab Zia’s clothes: “They are simple and elegant, without too much embroidery” — perfect for the summer! Meanwhile, reputed designer Umar Sayeed’s line Psyche is in keeping with Taneez’s image of elegance and simplicity.

The opening of Emporio Taneez, organised by Tehmina Khaled of Take II, attracted a large crowd comprising socialities, designers and the media, which actually made it a tad difficult to move around. The merchandise aside, one couldn’t even properly view the mini-fashion show featuring the various designers.

Who says Karachi is facing an economic downslide? Going by the number of visitors and buyers at Emporio Taneez, one would say business is booming.