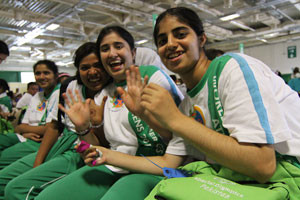 I wanted to get involved with SOP because I have two nephews who have intellectual disabilities. Harris and Amir are amazing individuals with unique qualities, and they have the benefit of living in the UK with a supportive family, school and welfare system. But in Pakistan there is little recognition of people with intellectual disabilities and little in the way of support, be it through education, access to behavioural specialists, activities or facilities. SOP provides all that and more. So, armed with my knowledge of dealing with young people with autism and developmental delay, I dived in headfirst with SOP. I joined not only as an ‘ambassador’ or ‘supporter.’ Being a journalist, I wanted to help raise awareness and get the group the media coverage it and its athletes deserve. I was appointed their media coordinator. I didn’t know what was about to hit me.

SOP participates in eight sports: athletics, aquatics, badminton, basketball, bocce (a ball game for low ability athletes), cycling, football and table tennis. I spent my time running around, camera in hand, to take the winning shots and send SMS alerts and press releases to TV channels and newspapers in Pakistan. I’d never covered sports and didn’t know any sports journalists, but we quickly developed a good relationship. The hype for the Games and Team Pakistan soon spread across the country. I was proud to be supporting and cheering on our athletes and sharing news of their success. But it was the kids themselves, their purity, blunt honesty and fun-loving natures, who blew me away.

There are so many special moments to share. The opening ceremony and the fun we had with 180 countries packed into one stadium. How Pakistan’s Farah Vohra was chosen to carry the Olympic Torch. How the athletes altered people’s views of Pakistan by being a positive face. Their witty, innocent comments about how the Acropolis is just a bunch of rocks fallen down! 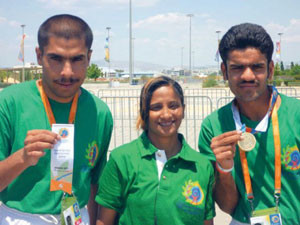 We took time out to tour Athens, meet athletes and trainers from other countries and enjoy evening festivities, such as Greek dancing and concerts by a local band, Red Carpet. Our athletes were in their element.

SOP is not just about sports. It’s about giving people with intellectual disabilities the confidence and courage to be independent, hold conversations with strangers, wash and dress themselves and lead an independent lifestyle as best they can. The difference I later saw in some of the athletes was amazing. What the Special Olympics does for people with intellectual disabilities — children and adults — is truly remarkable.

Their determination and drive were extraordinary. We were in the athletics stadium for trials one day when we witnessed something truly awe-inspiring. It was the 100-metre walk. The gun went off and three teenagers walked as fast as they could to the finish line. The race, we thought, was over. Then we looked back to the starting line.

Just a few metres in was a young man with cerebral palsy, making his way to the end. Surely he would give up? It was obviously too hard and too far for him? But he would not. And as the crowd stood up one by one, as the tears rolled down our faces, as cameramen put down their cameras to clap, a wave of cheering and encouragement joined him to the finish line. What an amazing young man.

That is what the Special Olympics are all about. It isn’t the winning. It’s that, despite the fact that society has shunned them or ignored them, despite the fact that they may not be able to lead a life similar to those of their siblings, these young people are out there to be the best they can be, challenging both themselves and our mindset.

Team Pakistan did wonderfully well. As I raced from one arena to another in the hot Greek sun, I was met with tears of joy, screams of “Pakistan Zindabad,” hugs of happiness and lots of medals. We won 17 gold, 25 silver and 14 bronze medals in Athens. But every coach, organiser and athlete took away a great deal more than that.

If you are interested in volunteering for or donating to Special Olympics Pakistan, please contact SOP via email: [email protected]