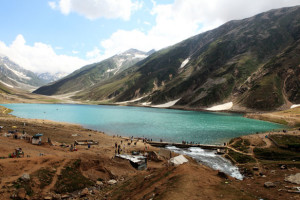 The breathtakingly beautiful Kaghan Valley, with its lush green landscape, crystal clear Kunhar River and serene Lake Saif-ul-Maluk, is one of the most legendary tourist destinations in Northern Pakistan. Like the valley, the people here are beautiful. And friendly and simple too. The local cuisine, ranging from the Peshawari tikka to karhai, is to die for.

Yet, for all this, the well-publicised Kaghan Tourism Festival, held in Naran from June 24-26, was a fiasco. Arranged under the auspices of the Department of Tourism Khyber Pakhtunkhwa in a bid to boost tourism in the area, it failed to attract a significant number of visitors.

A plethora of reasons can be identified for the festival’s lack of success, among them negligence towards cultural authenticity by the festival’s organisers. Syed Aqil Shah, the Minister for Tourism and Sports for Khyber Pakhtunkhwa, in a pre-festival press briefing claimed that culture indigenous to the people of Hazara would be highlighted. Yet, what visitors saw was a Lahore-based musical band that added only noise to the serene atmosphere and angered younger attendees. Even the minister yelled, “Pashto music, Pashto! Stop English songs,” pointing towards the stage.

Akhtar Munir Awan, a senior member of the Abbasin Arts Council Hazara (AACH), tells Newsline, “The so-called Kaghan festival was just a drama staged by the tourism department and nothing else. Not a single artiste was invited from Hazara to perform at the mela despite [the government’s] tall claims. Even singers and musicians from Peshawar would have been acceptable to us; why call [a band] from Lahore? And on top of that, [they played] pop music, which was Greek to most locals.”

The inaccessibility of the region also kept many from attending the festival. Despite the fact that 70% of Khyber Pakhtunkhwa’s tourism revenue is contributed by the Tourism Corporation of Khyber Pakhtunkhwa (TCKPK), the roads leading to the scenic resorts in the north of the province lie in a state of disrepair. Natural calamities and occasional landslides badly affect the existing infrastructure. While funds are being allocated for repair and reconstruction, the work is extremely slow paced.

Perhaps the most disruptive factor is the power outage schedule. After midnight, the city of Naran plunges into darkness, just as tired visitors return to their hotels from different tourist spots to get a good night’s sleep and power is restored to the area the next night at 8pm. With loadshedding come additional problems. Those who put up with all of the above are understandably eager to receive their pay-off: a view of the legendary Saif-ul-Maluk Lake. But problems begin as soon as one sets out. It takes a bumpy 30-minute ride in a jeep to get to the historic lake. This is just a precursor of the disappointment that lies ahead. The view of the lake is marred by wrappers and empty bottles thrown over by visitors in boats. And now that boat ferrying and cabin construction are permitted, human civilisation has begun its inevitable encroachment on the area surrounding the lake.

Eighteen hundred jeeps are now parked near the lakeside, while approximately 10 makeshift cabins selling food and snacks stick out sorely and add to the pollution in the area. Tourists roam up and down the banks, throwing in litter with impunity and there are no official attempts to stop them from doing so. 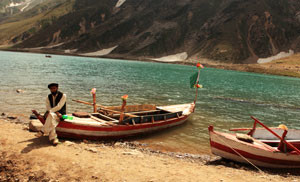 Incidentally, not all the locals are happy about the plan to instal a chair-lift. “Most visitors would prefer that to the bumpy jeep ride, but the drivers’ community will suffer financially, unless the authorities also do something to improve the condition of the road leading to Saif-ul-Maluk Lake,” says Gul Sambar, a local jeep owner.

A real boost for tourism in the Northern Areas would require efforts towards improving security, infrastructure and comfort. Merely paying lip-service will not improve the precarious situation of the once-pristine-but-now-at-risk lush green meadows, crystal-clear streams and high mountain peaks.

This article originally appeared in the August 2011 issue of Newsline under the headline “Paradise Lost.”