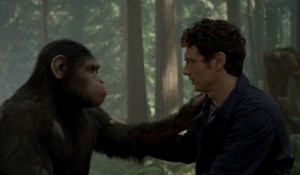 This is the kind of summer blockbuster that would be easy to get used to.

In Rise of the Planet of the Apes, the filmmakers come up with an origin story by over-thinking the original, good-naturedly simple premise, and thereby invest in it a complexity that is wholly unexpected. It’s a bit like obsessive fans breathing heavily as they dissect and elaborate on fictional universes, in the process seeing depth and nuance that was perhaps not even intended by the author. The question “how did the apes rise?” could have been answered with another swashbuckling instalment of the series (as has been done before in 1972’s Conquest of the Planet of the Apes). But Rise of the Planet of the Apes chooses instead to make up an origin story that allows the filmmakers to ask a more compelling question: What was it like for the first ape with human intelligence? This is the primary concern of the film, although we do find out how the apes rose (through spectacular monkey attacks, of course).

James Franco plays Will Rodman a scientist working on a cure for Alzheimer’s, which when tested on chimps endows them with a human level of intelligence. Franco’s emotional investment in finding the cure is neatly explained by the dementia that plagued his father (John Lithgow). The experiments are stopped when one of the test subjects goes on a rampage. The subject is revealed to have been protecting its baby, which after the incident is taken in by James Franco. The baby chimp, Caesar, inherits its mother’s preternatural intelligence. Caesar develops from a precocious young chimp that wants to fit in to a contemplative adult, tormented by his ability to be human when he clearly is something else. The character is beautifully realised, and one early scene wonderfully captures the chimp’s crisis. A dog barks at Caesar (Andy Serkis) while he is out walking with James Franco, and Caesar gives the animal a look that acquits the CGI better than any number of charging monkeys could — it is confusion mingled with dawning understanding, an ego pricked by the dog’s insolence as it singles Caesar out for abuse. Serkis, who plays the character through motion-capture, is allowed by technology to provide an astounding performance.

Franco surprises no one when he rashly injects his father with the cure after an injunction by the company to not test the drug on humans. Lithgow makes a full recovery, but the dementia eventually returns, and when the illness drives him to unwittingly rile his neighbour, Caesar goes too far while defending Lithgow. The violent attack lands Caesar in a primate facility run by its villainous owner (Brian Cox).

Caesar feels abandoned by his surrogate father, and his resentment of Franco coupled with the cruelty inflicted on the apes by the son of the owner of the primate facility (Tom Felton) brings out the revolutionary in him. The scenes in the primate facility are excellent, and establish Caesar as a charismatic, cunning leader whose menacing swagger is genuinely discomfiting. The final battle is engaging, frightening and tremendously fun. (On a side note, one particular scene that, according to Internet reports, elicited gasps and sputtered expletives around the world drew hearty laughs at Atrium Cinemas in Karachi — because monkeys are silly, cute animals…always).

This might be the first time a dramatic film has been carried by a CGI animal. CGI animals in lead roles have shown a tendency to be adorable and hip, and the fact that Caesar is a mute, glowering ape who completely fixates the audience means we as a race have begun to atone for Garfield. Andy Serkis’ performance is the undeniable centrepiece of the film.

Sadly the human characters collectively form the main flaw in the movie. The humans are faceless, anonymous plot drivers. James Franco is forced to follow the trajectory of every fictional scientist ever: ambition, recklessness, remorse. The main villain (David Oyelowo) really likes money and doesn’t care about anything else, especially not apes. The other villain (Felton) is villainous, and his evilness is matched only by his lack of depth. Freida Pinto’s character serves the important purpose of making viewers say, “Look, there’s Frieda Pinto” before realising that her superfluousness is slowly poisoning them and their children. Brian Cox is stupidly wasted in a non-role. Therefore the only aspect of the movie that brings bad memories of wanton, bloated blockbusters is the petrified-wood ensemble.

It is interesting that the uprising of the apes is prompted not entirely by human cruelty. It hinges on Caesar’s unrequited yearning to be human, and the abandonment that drives him to embrace the animal side of his personality. As a result the film is never reduced to an imperious, brain-dead parable about man’s cruelty to animals and reckless willingness to subvert the natural order. There is some of that in there, but it’s not shoved down your throat. The ending was a definite disappointment, opting to end on an optimistic note as far as monkeys versus humans goes. This was especially frustrating since the film was surprisingly bleak and ambiguous for a 100-million-dollar blockbuster up until that moment. For once it would be nice to see a very expensive film with an unapologetically grim ending. On the whole though, this film puts nearly all summer blockbusters in recent memory to shame. It is definitely more Dark Knight than Transformers 3.