A summary of the ethnic and political violence that shook Karachi in July 2011. 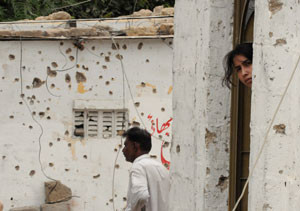 July 5: Ten people are killed and 25 left injured in Orangi Town as a fresh wave of ethnic violence engulfs the city.

July 7: Thirty-four people, including a six-year-old girl, are killed in attacks on houses and buses in different parts of the city, mainly Orangi Town, Baldia, Qasba Colony and SITE. Miscreants open fire on three passenger buses and torch several houses.

July 8: Thirty people are killed and eight shops are set on fire in various troubled areas.

July 11: Seven people are killed as violence erupts in Lyari once again. Tension between the Kutchi Rabita Committee and the Lyari Peoples Amn Committee leads to intense firing, causing the closure of the Jodia Bazaar, Kharadar and Shershah markets.

July 14: Fifteen people are killed and 32 vechicles are torched in Orangi, North Nazimabad, Gulistan-e-Jauhar and Shah Faisal Colony as the MQM protests against Zulfiqar Mirza’s outburst against Mojahirs at a dinner in Karachi.

July 16: Armed men open fire at the Kutchi community rally on Mauripur Road. A PPP leader and his aide are killed, while six people are left wounded.

July 19: Even as Sindh Governer and MQM leader Ishratul Ebad Khan returns from Dubai to discuss the Karachi situation with President Zardari at a highly publicised Bilawal House meeting, MQM worker Muhammad Iftikhar is found dead in Malir and a police constable is gunned down outside his home in Orangi Town.

July 22: A party feud between the MQM and the MQM-Haqiqi claims 13 more lives as Afaq Ahmed’s Haqiqi tries to stage a comeback in strongholds of Hussain’s Muttahida Quami Movement, including Malir and Khokhrapar.

July 23: Thirteen die in random assaults, including 10 in Malir. A lawyer/advocate, Mukhtar Hussain Bakhar is killed in Bheempura.

July 24: Eighteen people are killed. The ban on pillion-riding is reimposed. Gun battles in Malir, Landhi and North Karachi cause commercial areas to close as the public stays indoors.

July 25: A PPP activist is gunned down in Korangi and an ambulance belonging to the Khidmat-i-Khalq Foundation, a charity service of the MQM, is torched.

July 26: Six people are killed in fresh violence, including two political activists, one belonging to the Sunni Tehrik. Some private property is damaged in arson attacks in Orangi Town.

July 27: Fifteen people, among them six MQM activists, two PPP party workers, an ANP worker, a lawyer and a policeman are gunned down in strife-ridden areas.

July 30: Twenty people are killed in a fresh round of chaos in Orangi Town, Lyari, Landhi, Gulistan-i-Jauhar and Surjani Town.

July 31: Fifteen people, including a policeman, are killed as violence continues in the city, mainly in Orangi Town, Landhi, Malir and Sachal Safora.