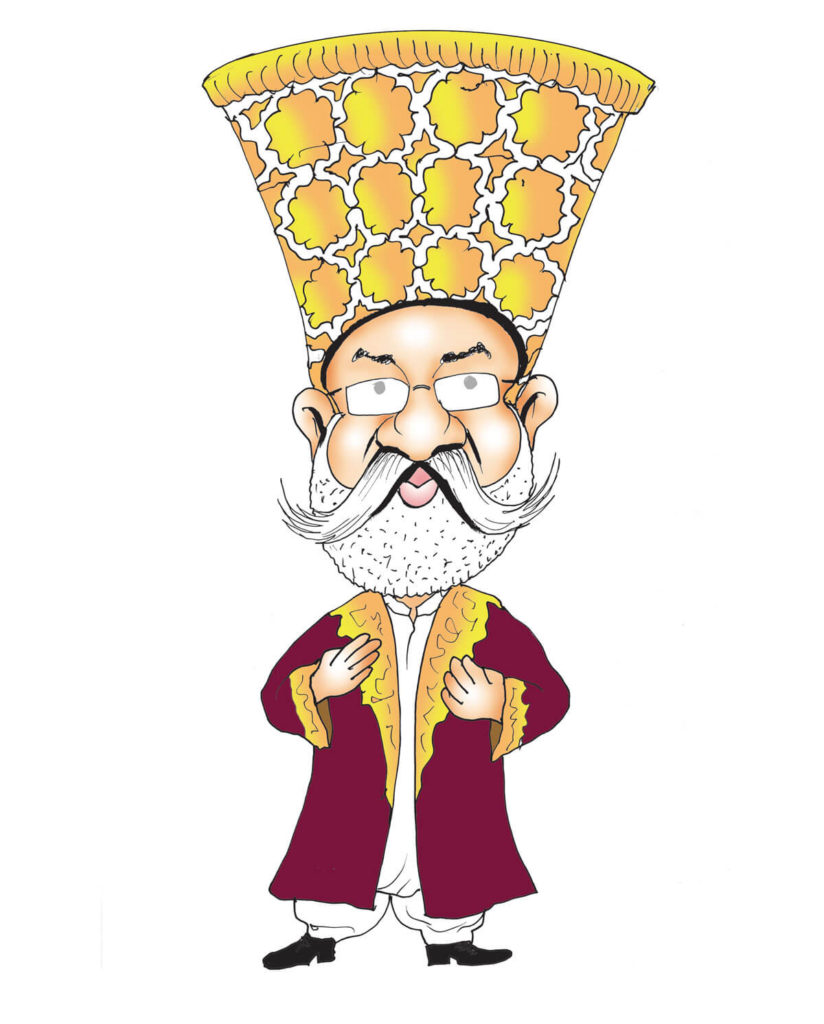 Old friends and acquaintances of Pir Sibghatullah Shah Rashidi III, whom they know as Raja Saeen, complain that ever since he assumed the mantle of Pir Pagaro in January 2012, he stopped returning their calls. But come the general elections, even saints need all the help they can get. Especially when pitted against the PPP in Sindh. And so, Pagaro, a hands-on agriculturalist, was forced to get off his tractor — installed with laser land-levellers paid for by his mureeds — and reach out to potential allies.

The result? An updated version of the alliance he had managed to cobble together for the 2013 general election. If any lesson has been learnt from his last battle with the PPP, it is this: there will be dhandhli.

The Grand Democratic Alliance (GDA) was registered with the ECP in October 2017, with Pir Pagaro as its ceremonial figurehead, and his younger brother, Pir Sadruddin Shah Rashidi, as its President. The alliance brings together anti-PPP forces of all hues under a common cause: to prevent the PPP from winning a majority in the Sindh Assembly.

The 10-party coalition formed by the PML-F for the 2013 general elections included, among others, the PML-N, the JI, JUI-F and smaller nationalist parties such as the Sindh Tarraqi-Pasand Party and the QAT. Like the GDA, this assortment of political heavyweights was not driven by a common political ideology, but a singular focus of providing voters with an alternative to the PPP in rural Sindh. It failed to do so and won only seven seats in the Sindh Assembly in 2013.

Today, the PML-F, which lies at the helm of the GDA, is a mere shadow of what it was during the run-up to the 2013 elections. In 2016, the party saw an exodus of loyalists who had grown increasingly disillusioned with the new leadership. The most notable among these was Senator Ali Shah Jamot, son of the late Zulfikar Ali Shah Jamot, whose family had been loyal to Pir Pagaro for three generations. Ali’s grandfather, Muhammad Ali Shah Jamote was a close friend of the Pir’s. This notwithstanding, Ali did not hesitate to jump ship when a better offer came along and in November 2016, announced his decision to join the PPP.

Jamot was not alone. Imtiaz Shaikh too parted ways with PML-F and joined the PPP in August 2016, on grounds that the party was being run by the pirs like a personal fiefdom. He was followed by Jam Madad Ali in December 2016.

Nevertheless, with the support of the PTI and MMA in various constituencies, the GDA has emerged as a formidable force in the province and an effective bulwark against pre-poll rigging attempts by the PPP. The alliance retorted to a Bilawal Bhutto Zardari-led rally in Pir Jo Goth, with a show of power in Nawabshah, the Zardaris’ home turf, on July 15.

While there is an urgent need for an alternative to the PPP in Sindh, a closer look at the credentials of the PML-F and its leadership may prove instructive.

Devotees of the late Pir Pagaro, Syed Shah Mardan Shah II, may have numbered in the thousands, but the Pir himself remained a mureed of the military, after being appointed by Ayub Khan as head of the Pakistan Muslim League in 1965. The Pagaros’ rivalry with the Bhuttos dates back to the Ayub regime and to personal entanglements with Zulfikar Ali Bhutto over the property of his father-in-law, the late Khan Bahadur Ahmed Khan Bhutto.

The PML-F, characteristically, was not formed on the basis of a driving vision or philosophy, but because Pagaro was not happy with Mohammad Khan Junejo, his protÃ©gÃ©, being appointed the head of the PML under Zia’s dictatorship — a regime the Pir had supported until then.

While Raja Saeen lacks his father’s charisma and education, there is a school of thought that credits him with being more approachable than his predecessor and more of a ‘people’s person.’ Yet prior to his ascendance to the royal gaddi, it was his brother, Sadruddin Shah, who held the political flag in the family and is still considered by followers to be the more politically savvy of the two. Raja Saeen had, then, largely remained in the background and out of the public eye, living the life of an agriculturalist.

Despite their strong support base, or perhaps because of it, the Pagaros have traditionally sided with the army and preferred to play the role of power-brokers, instilling fear in the hearts of citizens with premonitions of a possible military takeover.