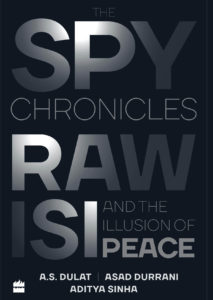 If you’re looking for sensation — one generated by actual content and not the overblown hype in the media — look the other way. Asad Durrani’s latest book isn’t half as revealing as it was believed to be pre-release. In fact, to find the reason why the book is mired in controversy, one doesn’t need to go much further than its cover: two of the writers mentioned on the cover are former chiefs of ISI and RAW.

His counterpart, A.S. Dulat, is a former joint director (Kashmir) and special director of the Indian Intelligence Bureau (IB) and former Director of Research & Analysis Wing (RAW) from 1999 to 2000, when he retired. He is a specialist on Kashmir, having served as the advisor to then prime minister, Atal Bihari Vajpayee, from 2001 to 2004 and subsequently authored the book, Kashmir: The Vajpayee Years.

Readers would note a third name on the cover of the book, that of Aditya Sinha. Sinha is a journalist and published author of a number of books including, but not restricted to, Farooq Abdullah: Kashmir’s Prodigal Son and The CEO Who Lost His Head.

The Spy Chronicles: RAW, ISI and the Illusion of Peace is, quite literally, a conversation between those three names on the cover. And that, for many, would be where the irritant lies.

Sure, a conversation between two heavyweights spies — one from India, one from Pakistan — moderated by a seasoned journalist, should be interesting. And it is. But is it the thoroughly researched, analytical, and insightful piece of work that we were all hoping it would be? That we were expecting from a top brass duo?

If those are your expectations — which they really should be — then prepare to be disappointed. For Spy Chronicles is not The History of the Decline and Fall of the Roman Empire, nor are Durrani and Dulat an Edward Gibbon, or even Ayesha Siddiqa. For that matter, even Pervez Musharraf’s In the Line of Fire had more meat.

Instead, Durrani and Dulat are simply two men who know a great deal about how military intelligence works on either side of the Line of Control, and who have, over the years, developed educated theories about what certain events meant in the history of India and Pakistan, how they took place, who was behind them, and what their impact was.

And their brainchild, Spy Chronicles, is simply a seven-part and 33-chapter long chronicle generated out of a conversation between three people.

Expect more of a light narration of facts and banter than a serious, strategic analysis of how the militaries on either side of the border work. A particular favourite for many could be Dulat explaining how the value of spy agencies varied from era to era:

And then there are some casual statements such as this one from Durrani.

“I never rated CIA assessments highly. Never. They don’t believe they have to carry out good assessments. Because in any case they are going to set the place on fire. Bomb it.” (Chapter 6)

Any conscientious researcher would need to do a double take on that statement, and gawk at how generalised it is, sans any statistical or referential support to give it weight. Certainly not something one could quote or cite in a research paper.

And there was that fateful part of the conversation that almost earned Durrani a spot on the ECL: the one about 26/11, and the one which was truly anticlimactic. Dulat asks Durrani how the Mumbai Attacks took place, and, after explaining his stance on the matter — that whoever did it must be punished — stated, “I don’t know who did it, but there were questions that David Headley named an ISI major.”

Dulat goes on to ask, “But the story is that Headley collaborated with Hafiz Saeed.” To which Durrani replies:

“Because all these stories have floated around, people can go ahead and investigate. For eight years both of us have advocated joint investigation, joint trial, intelligence sharing, get on with the anti-terrorism mechanism, etc., for the simple reason that we can’t do anything until and unless this is resolved. Till then, Hafiz Saeed, ISI, Jaish-e-Mohammed: it’s possible they had nothing to do with it, that there’s a third or fourth or fifth party involved.”

Nowhere does Durrani state explicitly that Pakistan or any organisation or entity within Pakistan has, for sure, undertaken the Mumbai attacks.

Furthermore, even though it has attempted to be organised, the book does not really have the semblance of a carefully structured book that, above all, is easily navigable.

Spy Chronicles can be extremely tedious to navigate, which is understandable given that it is a conversation, and since when did conversations come with a list of search terms, a glossary, and an organised, essay structure?

The book’s authors did, as a last-ditch attempt, slap on some names on the chapters and parts to help readers find what they’re looking for, but they aren’t always successful.

Even so, Spy Chronicles does have bouts of deep insight, especially on the topic of Kashmir — hardly a surprise, given that its writers are experts on Kashmir. It has important information and reflection wrapped in the garb of a coffee table book that would truly give you the feel of having coffee with the authors. And, though that still doesn’t make up for its flaws, it is something unique.