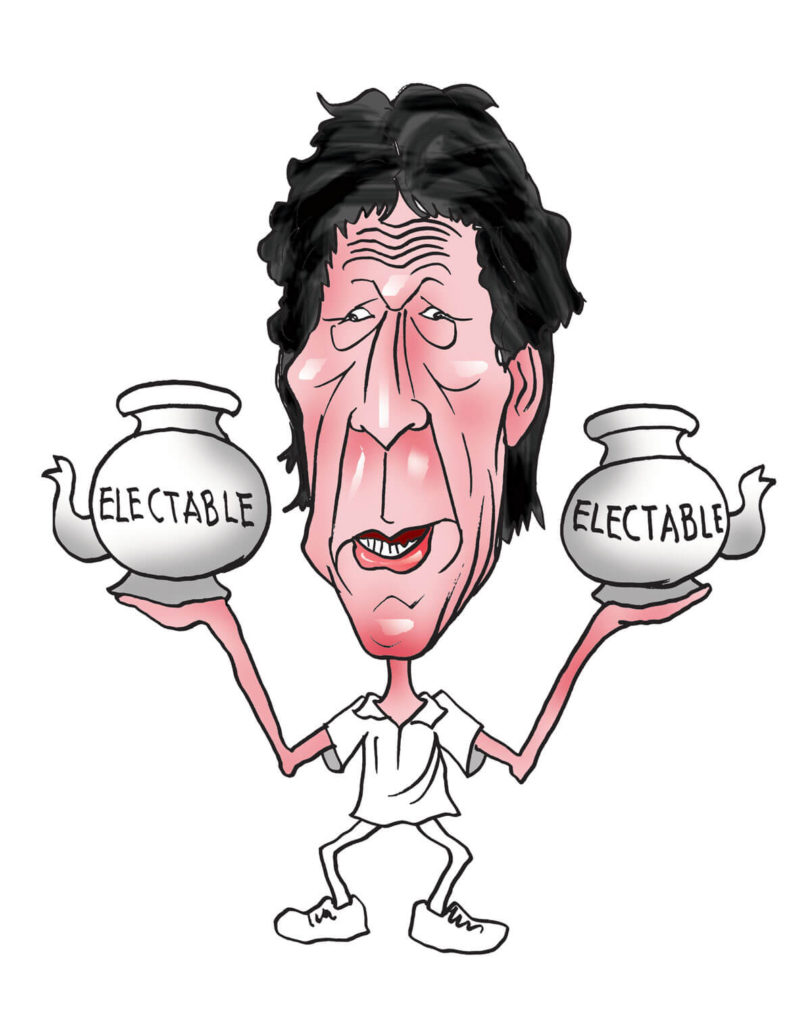 The idealism that defined the PTI in the 2013 electoral race has been replaced with realism in 2018. The party gearing up for the July 25 elections is not the same as the one that existed during the days of the dharna. Contradictions within the PTI are best reflected in its Chairman, Imran Khan and his tendency to rouse a polarised reaction.

Imran Khan’s personality cult had been an asset for the party since its inception in 1996. The profile of Khan the cricketer and Oxford-educated playboy drew a sympathetic response from Pakistanis, particularly urbanites, who could relate to it more than that of the elusive feudal-as-politician. A new face, the only track record Khan had to show for himself was the setting up and running of the Shaukat Khanum hospital — a feat that earned him full points. Yet despite his celebrity appeal and perhaps even inspite of it, few took him seriously as a political leader.

Today, however, the profile of Khan the politician has morphed into a different kind of beast. His penchant for controversy has earned him widespread criticism. This includes his applause for the Taliban’s role in Afghanistan prior to 9/11 and his decision to fund JUI-S Chief Sami-ul-Haq’s network of madrassas attended by 2.5 million students. In the 2018 elections, Khan is being touted by many as the establishment’s candidate for prime minister.

PTI supporters, meanwhile, can be divided into two groups. Loyalists who have stuck to the party since its inception, and senior politicians who, at first, heaped scorn upon the fledgling organisation and downplayed its prospects, but later flocked to it after the party established itself in the 2013 elections as a mainstream force in Punjab and a potential replacement to the PML-N. The PTI today has a large coterie of defectors from the PPP and the PML-N. Their migration was triggered largely by two developments: the reduction of the PPP to a regional force in the 2013 elections and the disqualification of prime minister Nawaz Sharif by an apex court in July 2017.

As a result, the foremost criticism against the party is that it has taken on board the same corrupt, discredited ‘electables’ that had previously infested parties of the status quo. This runs in stark contrast to assurances made by the chairman in 2012, that he only needed the youth and not big names. By June 2018, however, he told party workers staging a dharna outside Bani Gala that electables were essential for winning elections.

Among the earliest ‘big names’ that made inroads into the party was a disgruntled PPP veteran, Shah Mehmood Qureshi, who jumped ship after an impressive show by the PTI at the Lahore rally in November, 2011. Nadeem Afzal Chan, the PPP’s general secretary in Punjab and a close aide of Asif Ali Zardari’s, resigned from his party post in 2017 and followed his brother Waseem Afzal, into the PTI fold in 2018.

Not everyone, however, could find sanctuary in the party and in May 2018 the party expelled Farooq Bandial, soon after taking him in, owing to an outcry on social media over his criminal past. A significant portion of the PTI’s current support comprises political personalities who were driven to join the party not on the basis of ideology, but because they had developed differences with their parties and were looking for a politically relevant alternative.

In 2013, more than 80 per cent of the party tickets were given to candidates who had no experience in contesting elections or running an electoral campaign. As a result, the party obtained the third highest number of votes in the National Assembly.

As far as the party’s achievements are concerned, the statistics speak for themselves. Tank district in Khyber-Pakhuntkhwa (KP), where the party formed a coalition government with the Jamaat-e-Islami (JI), ranked the highest on primary school infrastructure rankings, according to Alif Ailaan’s Pakistan District Education Rankings, 2017. KP’s Haripur district, meanwhile, ranked the highest in education score.

In the KP Budget 2017-18, funds allocated for education were 27.9 per cent of the entire budget, a 17 per cent increase from the previous year, and the largest sum allocated in a single field. The province’s healthcare sector, meanwhile, has seen revolutionary changes. The doctor-to-patient ratio improved considerably after the government employed new medical staff. Additionally, free medical treatment was provided to poor families through various health insurance initiatives, including the Sehat Insaf Card.

While Operation Zarb-e-Azb, launched in 2014, improved the security situation in the province, the KP Police Ordinance 2016, promulgated by the provincial government, provided for greater accountability, transparency and merit-based recruitment, vesting in the chief of police the powers to resist political interference. The year 2017, meanwhile, witnessed a decline in terrorist attacks and target killings as compared to 2016.

As far as mega-projects were concerned, the provincial government was lagging behind its Punjab counterpart. It therefore decided to play to the gallery by announcing the Peshawar Metro Bus project which was not completed by its due date on April 20, this year.

Additionally, the Ehtesab Commission, an anti-corruption brainchild of the PTI, formed in 2014, proved to be toothless.