In a matter of days, Pakistan will witness its second democratic transfer of power amid widespread scepticism regarding the transparency of the electoral process. Evidence suggests that the Election Commission of Pakistan (ECP) and the caretaker setup have been unable to ensure a smooth preamble to the 2018 elections. If the countdown to July 25 has reinforced a single truth, it is that uncertainty will prevail.

Two suicide blasts and an attack on a convoy claimed over 170 lives, including those of Siraj Raisani and Haroon Bilour. Landmark court rulings, meanwhile, held far-reaching implications for the future of Pakistan’s two leading political parties — the PML-N and the PPP. The Avenfield reckoning landed one branch of the Sharifs behind bars. Accountability in a multibillion-rupee money-laundering scam that could spell the beginning of the end for the PPP leadership was temporarily put on hold by the Supreme Court. But as the old adage goes — in the politics of Pakistan, nothing is final.

The ECP did not have the last word in the rejection of candidates’ nomination papers. Applicants could turn to the election tribunal for a second scrutiny, and as a last resort, to the Supreme Court. In this manner, candidates such as the former prime minister, Shahid Khaqan Abbasi, were able to crawl back from the edge of eligibility. The PPP’s Sindh President, Nisar Khuhro, may very well do the same.

Yet even the Supreme Court’s word isn’t carved in stone. The incoming Parliament can pass laws that enable disqualified candidates to resurface in the same term. There are, also, other ‘options.’ Candidates such as Khuhro had the last laugh despite being declared ineligible. His backup for PS-11 (Larkana II) was his daughter, Nida Khuhro, who will be contesting in his place.

Similarly, questions over impartiality in the appointment of Khalid Jawed Khan as Attorney General of Pakistan have also been raised in various quarters, owing to the candidate’s close affiliation with the PPP leadership.

Deadlines aren’t final either. Despite its tall claims, the ECP has been unable to deliver within the timeframes of its own choosing, constantly finding the need to amend and extend. Here too, politicians call the shots. The ECP had marked June 29 as the deadline for the submission of party tickets to returning officers. At the last minute, this was extended by a day. It also failed to publish the final list of candidates and their electoral symbols on June 30, the allotted date.

Nor was the bureaucratic setup organised by the caretaker government, final. After the Pir Pagaro-led Grand Democratic Alliance repeatedly raised concerns over the lack of an impartial bureaucracy in Sindh, the caretaker government carried out a major reshuffle in the province. This too may be subject to further change, as the PPP has officially demanded a return to the previous arrangement.

Candidates have continued to act in violation of the ECP’s Code of Conduct for the 2018 elections, which prohibits the use of hoardings and billboards and limits the size of the largest banner to 9 x 3 feet.

A Score Card on the Perception of Pre-Poll Fairness published by the Pakistan Institute of Legislative Development and Transparency (PILDAT) termed the pre-electoral process in the 12 months leading up to the election, from April 2017 to March 31, 2018, as “unfair.” This included the conduct of local governments in influencing elections. PILDAT also found the National Accountability Bureau (NAB) to be lacking in neutrality.

The anti-corruption body has come under widespread criticism for targeting the Sharifs and the PML-N, while giving other equally corrupt elements a clean chit. The result? Raids led by Rangers in rural Sindh and the arrest of 70 suspects. Among these was Ismail Dahiri, a former special assistant to the Sindh chief minister and a senior office-holder of the PPP’s Nawabshah chapter, who was caught with a vast arsenal of illicit weapons.

“Disqualification laws should be amended in order to remove the undue clogs on the candidates, particularly those based on abstract ethical standards imposed by Articles 62 and 63 of
the Constitution,” says lawyer and academic Shahab Usto. He contends that electronic voting machines would have guaranteed a polling scheme free of manipulation.

Only 48 per cent of the country’s population thinks the 2018 election will be free and fair, according to a poll conducted by Gallup Pakistan. It marks a 13 per cent decline from expectations in 2013.

According to figures provided by the ECP in July 2018, 3,675 candidates are contesting for the National Assembly. Of these, 1,696 are from Punjab, 872 from Sindh, 760 from Khyber Pakhtunkhwa and 303 from Balochistan. Meanwhile 4,242 candidates are contesting for the Punjab Assembly, 2,382 for the Sindh Assembly, 1,264 for the KP Assembly and 1,007 for the Balochistan Assembly. 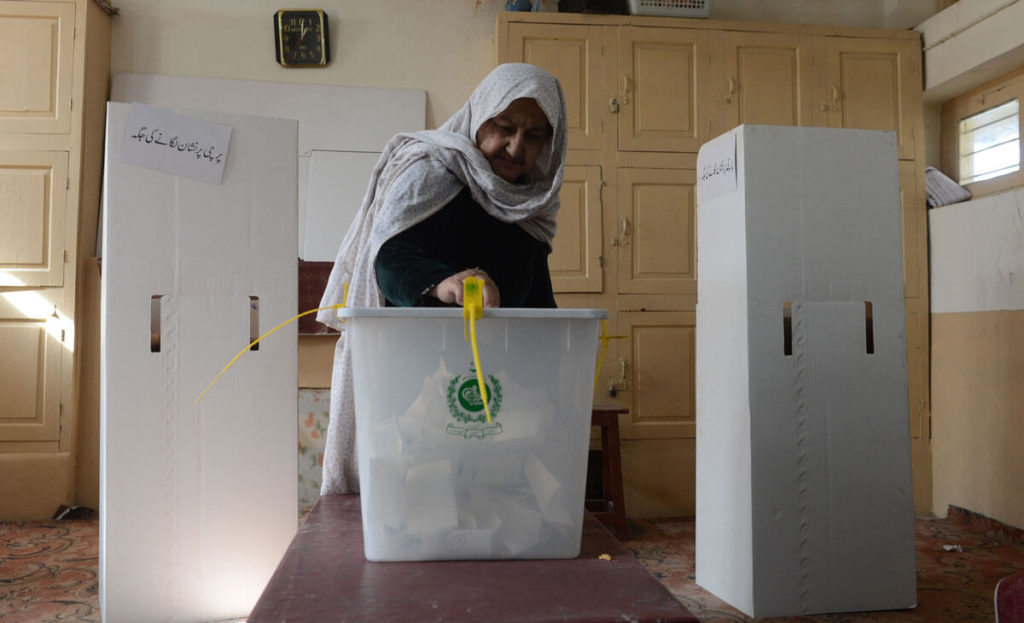 Elections are being contested on the basis of issues such as water scarcity, the lack of healthcare and educational services, electricity shortage, unemployment and the current account deficit. Corruption, which lies at the root of these problems, has been the rallying platform of parties such as the PTI from the very start. Through its ‘First 100 Days’ plan, it aims to steer the country on the path to prosperity, via economic revival, reforms in governance and the strengthening of national security.

The PPP, meanwhile, continues to rely on the dynastic factor to pull voters. Its 64-page election manifesto says little about ways in which to eradicate corruption, focusing instead on a “Hunger Eradication Programme,” an “Expanding, Linking-up and Joining-in (ELAJ)” healthcare initiative and an “Apni Galian, Apnay Ghar” housing scheme.

On the issue of water shortage, the document lists the party’s achievements in this field and pledges to “prioritise investments in water projects across the country.” It offers a continuation of the National Education Policy launched by the PPP-led government in 2009 and the implementation of Article 25-A (“free and compulsory education”). 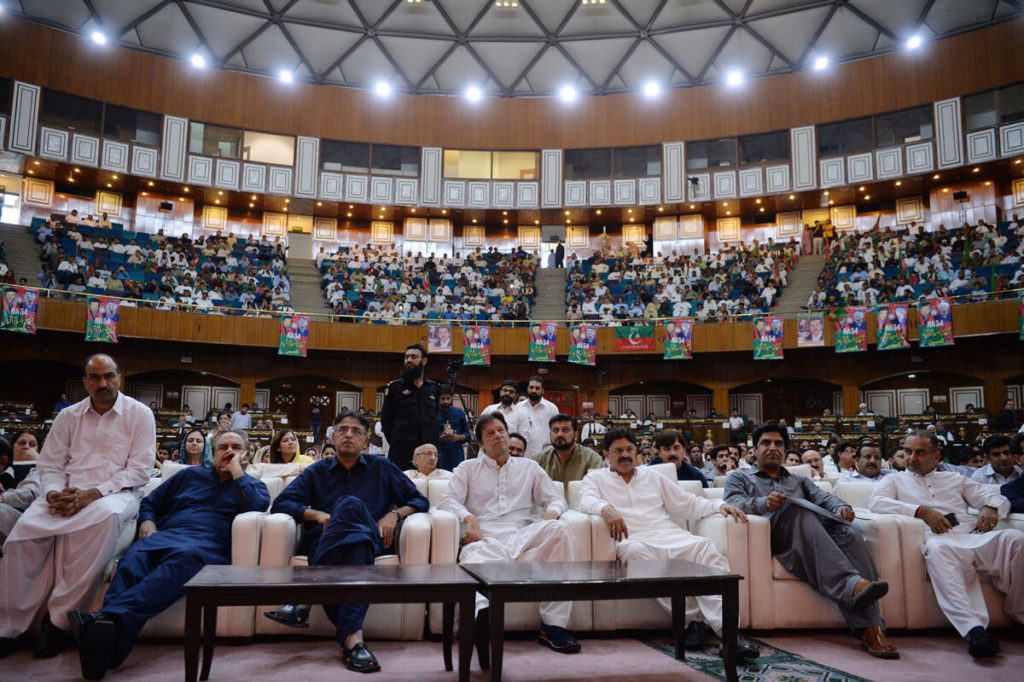 The PML-N, meanwhile, promises to eliminate poverty by 2030, create jobs for two million new entrants in the market and distribute state-owned land among landless tenants, in 5-acre packages. It intends on adding 15,000 MWs of power by 2025, constructing the Diamer-Basha Dam and Mohmand Hydropower project and supplying clean drinking water to coastal areas by setting up desalination and reverse osmosis plants.

The 12-point election manifesto of the Muttahida Majlis-e-Amal (MMA), an alliance of right-wing religious groups, prioritises the implementation of Shariah Law and the creation of an international bloc of Islamic countries to counter the West. It proposes the creation of reservoirs to address water woes, an alternative energy policy and improved distribution in response to the power shortage and pledges to prioritise the interest of locals in the implementation of CPEC.

Tehreek-e-Labbaik Pakistan’s (TLP) 20-point election manifesto also promotes the creation of an Islamic bloc and aims to establish a welfare state and abolish the system of co-education in schools. 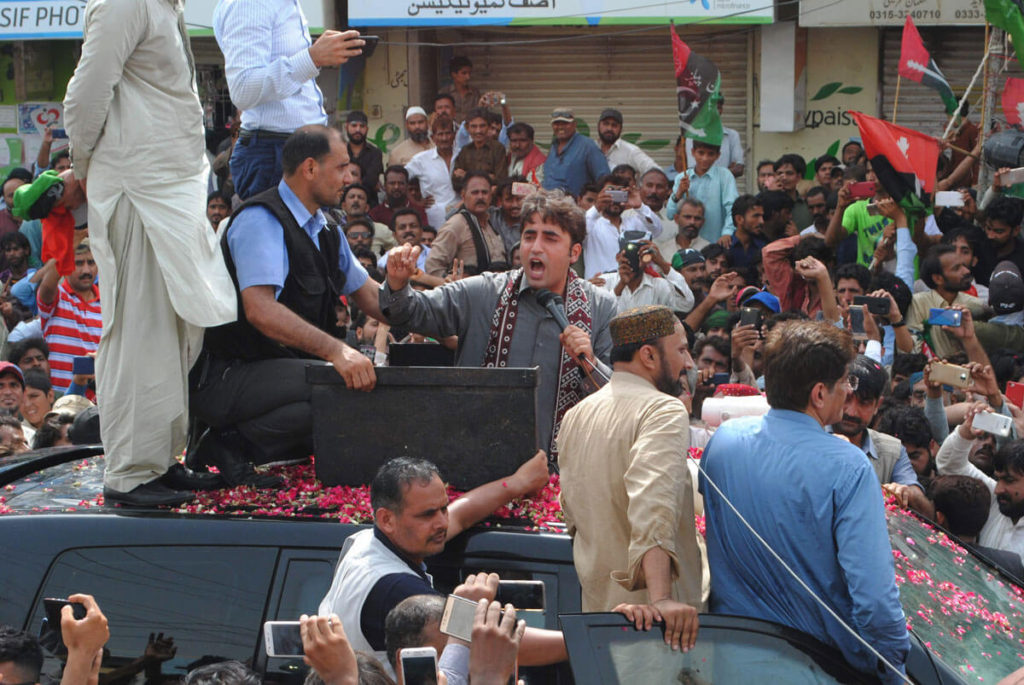 Since January 2018, 60 former elected representatives have changed allegiances, according to the Free and Fair Election Network’s (FAFEN) General Election Update V. In the month of June alone, the largest desertions — numbering six — have been from the PML-N to the PTI, in Punjab. In Sindh too, leaders have defected to the PTI for the most part, with two from the MQM, two from the PPPP and one from the PML-N, joining the party.

In addition to this, on June 30, seven PML-N ticket-holders in south Punjab decided to return their tickets and contest as independents. They were allotted the ‘Jeep’ symbol amid widespread suspicions of miltary meddling. The PILDAT scorecard found the stance of the army in the run-up to the election as “highly unfair.”

The highest number of claims of pre-election intimidation and violence between January and June 2018, according to FAFEN, were reported in Sindh (43 cases), followed by Punjab (27), Balochistan (10) and Khyber Pakhtunkhwa (5). In all cases the source of the intimidation were the administration and police of the respective provinces.

At the same time, politicians who had failed to deliver were at the receiving end of the public’s ire. Videos surfaced on social media of leaders, including Bilawal Bhutto Zardari and Murad Ali Shah, being confronted by their constituents.

Usto, however, sees the protests as a temporary phenomenon that will soon abate. Due to the absence of a political alternative, he does not think that the PPP will suffer any serious setbacks in rural Sindh unless the establishment throws its weight behind the motley crew of independents, the GDA, the various MQM factions and the PTI.

Meanwhile, rural voters (18 per cent) are more worried about the outbreak of violence on polling day compared to urban voters (14 per cent), according to a survey conducted by Gallup Pakistan in March 2018. The ECP has announced its intention of deploying a total of 350,000 army personnel at 40 to 50 per cent of the polling stations across the country, in what is expected to be a historic ballot.