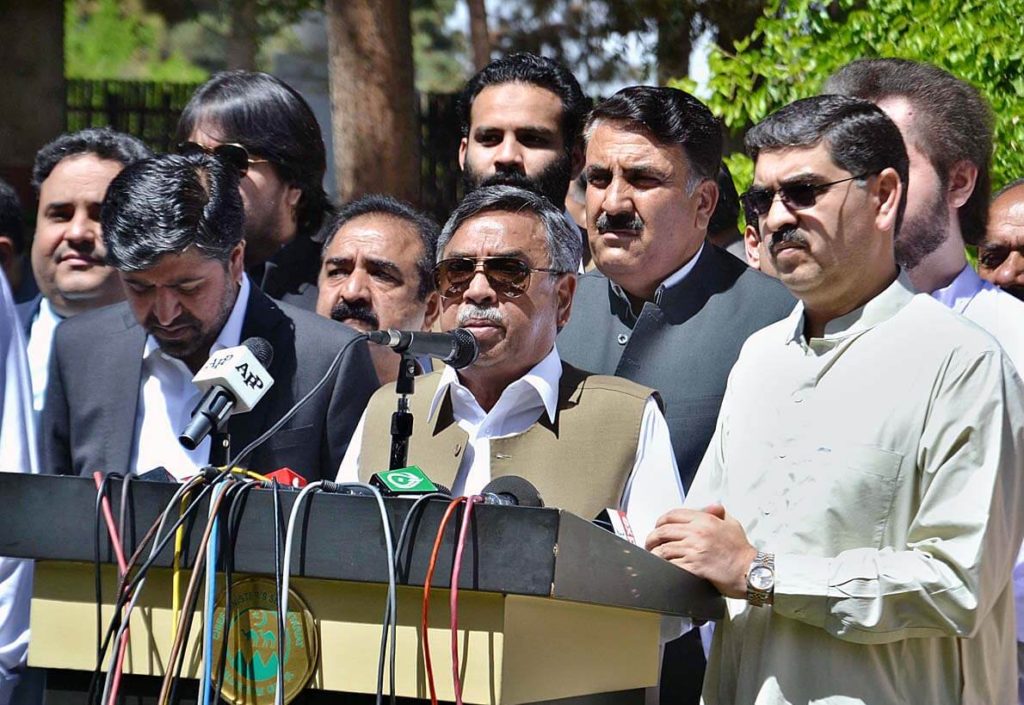 The unpredictable political landscape in Balochistan has led to a variety of surprise developments in 2018. An in-house coup against the Pakistan Muslim League-Nawaz (PML-N) government in the province almost jeopardised the timely conduct of the Senate elections. Then, the Balochistan Assembly, in its last session, demanded the postponement of the general elections on the flimsy pretext of loadshedding. And amidst the turmoil, there was yet another new development on the political horizon: the advent of a new ‘King’s party,’ the Balochistan Awami Party (BAP), which came into being on March 29.

The BAP is a product of PML-N rebels who toppled Sanaullah Zehri’s government in January this year. They were joined by independent Senators elected from Balochistan in March and other electables — with daily announcements of individuals making inroads into the new party.

It is, currently, the strongest party entering the electoral contest from Balochistan. According to estimates, the BAP has the capacity to win 25 out of 65 seats in the provincial assembly. This indicates that it is highly likely that the party will form the next government in Balochistan.

The BAP is a new political phenomenon. In the past, electables from Balochistan would join a federal-level party that formed the government at the centre. This time round, however, they have in the BAP a Balochistan-centric party. One that claims to put Balochistan first and struggle for the rights of the province that have been usurped by the federal government.

It is, therefore, not very different from Baloch and Pakhtun ethno-nationalist parties. Yet what makes the situation baffling is that a majority of BAP members have, in the past, been against nationalist politics.

The party’s sudden arrival and the influx of high profile candidates have subjected it to severe criticism in Balochistan. At private gatherings, politicians, journalists and social media activists have openly claimed that the BAP is a product of the establishment — the country’s powerful hidden hand. And it will, allegedly, be used as a tool to control the affairs of the province.

Sardar Akhtar Mengal, Chairman of the Balochistan National Party and former chief minister of Balochistan, criticised the BAP and its members. Known for his razor sharp wit which, at times, borders on the uncomfortable, Mengal said “I am glad the political orphans have found their father in the shape of BAP.”

The BAP coming to power can be problematic for the people of Balochistan in many ways. Those who make up the party’s leadership have been in power for the last five years. Jam Kamal, the President, served as minister of state for petroleum and natural resources in the cabinets of Nawaz Sharif and Shahid Khaqan Abbasi. His family has ruled Lasbela district since partition. His grandfather, Jam Ghulam Qadir, and father, Jam Yousaf, have served as chief ministers of the province.

Shahzada Zulfiqar, a journalist who has covered the politics of Balochistan for three decades, believes that so far there is no indication that the BAP will do anything different for Balochistan. “BAP ruled Balochistan for the last four-and-a half months before the dissolution of the assemblies and their governance was no different from those of the past,” he told Newsline.

Zulfiqar contends that the BAP can backfire on whoever is behind it, once it fails to deliver. He believes the party has to work wonders in terms of good governance to make itself acceptable in the eyes of the citizens of the province.

National Party leader Dr Ishaque Baloch too is sceptical about the BAP. “Only time will tell if the idea of the BAP is a success or a failure,” he says. According to him, political parties evolve with time and any party that comes into being overnight without going through the necessary evolutionary process, will end up like the Islami Jamhoori Ittehad (IJI), or the Pakistan Muslim League-Quaid (PML-Q). He claims that the BAP is relying on its electables for votes.

A BAP ticket is the hottest-selling commodity in Balochistan in the run-up to the elections. The BAP has the same appeal in Balochistan as the Pakistan Tehreek-e-Insaaf (PTI) has in Punjab. Even the opportunistic politicians in the province, who previously joined the PTI, are now switching to the BAP.

Zahoor Buledi, a former provincial minister and Senior vice-president of the BAP, dismissed all criticism against the party as something all new political entities face. “The BAP is a product of the political crisis in Balochistan, which started due to the failure of the nationalist parties when they were in government,” says Buledi. He alleges that in the past, Balochistan has always been used as a dispensable political card by the federal government. “BAP will ensure that the province’s affairs are determined by the people of Balochistan,” he adds.

As things currently stand, it is a given that the old guard, which has always been in power and which is now part of the BAP, will form the government in Balochistan after the July 25 elections. It can only be stopped if all other parties in the province — the BNP, the NP, the MAP and the JUI-F — form an electoral alliance. Yet even such an alliance cannot prevent the BAP from becoming a major player in the next provincial assembly.

However, any thoughts of a grand opposition alliance in Balochistan seem to be wishful thinking owing to the differences between opposition parties and the egos of their leaders.

The BAP, meanwhile, can prove its critics wrong by governing the province well. By taking tough decisions in the interest of Balochistan they can absolve themselves of the allegations of being an establishment-backed party.

At this point, however, it is difficult to imagine that those politicians who have always been in power and are a part of the problem, will suddenly turn into revolutionaries and start delivering. In short, another five-year period of bad governance awaits the people of Balochistan.