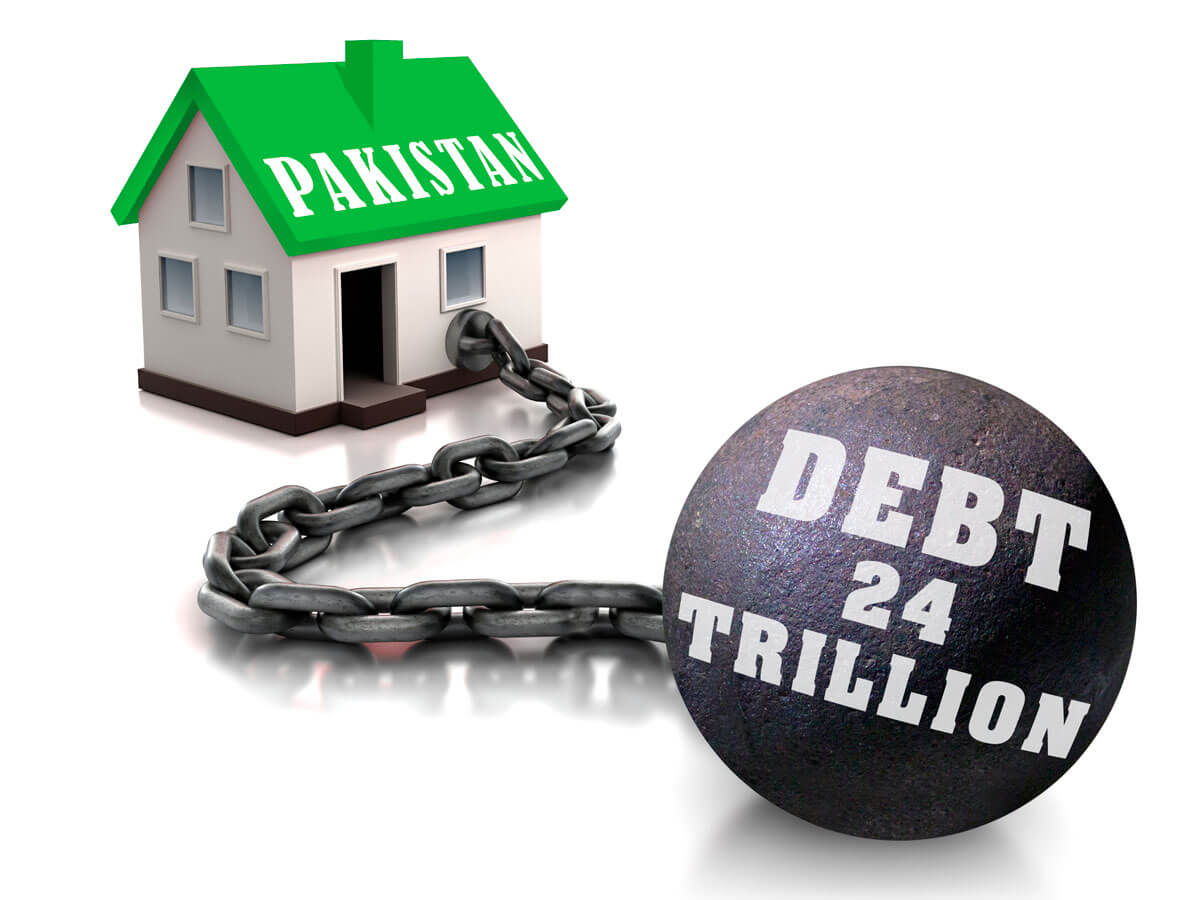 When the new government takes charge after the July 25 elections, the foremost task of the new economic managers will be to knock at the door of the International Monetary Fund (IMF) for a bailout package or make frantic calls to friendly countries for injection of funds to ward off the looming threat of default on Pakistan’s external loan and import payments.

“The situation is really bad,” Dr. Abdul Hafiz Pasha, one of Pakistan’s most respected economist and a former finance minister, told Newsline. “A balance of payment crisis is staring Pakistan in the face. The new government will find itself in a very difficult position from day one as to how to keep the economy afloat.”

But what has gone wrong with the economy?

Wasn’t the Pakistan Muslim League-Nawaz (PML-N) government boasting about achieving the highest economic growth of 5.8 per cent for the first time in a decade till only a couple of months back? Wasn’t the ousted prime minister, Nawaz Sharif, and his “experienced” team claiming that they had managed to turn the economy around?

Leading economic experts and analysts say that the former PML-N government, which ended its five-year term on June 5, had created an illusion of economic stability, growth and development on the back of unprecedented heavy domestic and foreign borrowing. The PML-N government not only funded the mega, and often wasteful, infrastructure projects to create a false bubble of growth through reckless borrowing, but also maintained foreign reserves at a higher level. No wonder, the overall public debt soared to more than 24 trillion rupees by 2018 from 14.2 trillion in fiscal 2013. It was 6.4 trillion rupees in 2008.

But the two top selling points — high economic growth and record reserves — in the PML-N’s highly exaggerated and deceptive performance story were not being backed by the country’s economic fundamentals. The economic growth was pumped up through government spending, which was artificial and unsustainable.

The fiscal deficit is expected to widen to 6.5 per cent of the Gross Domestic Product (GDP) in fiscal 2017-18 against the revised target of 5.5 per cent and the original one of 4.1 per cent. Analysts say that the PML-N government monetised by borrowing from the State Bank of Pakistan.

According to the Pakistan Tehreek-e-Insaaf leader, Asad Umar, who has been tipped as finance minister if his party wins the elections, “Monetising is as good as printing notes.

“The PML-N government monetised 2384 billion rupees… When you create aggregate demand through artificial spending, it means that goods and services remain the same, but the money chasing it increases.”

The other key economic figures also serve as an eye-opener. The current account deficit, which hit around $16 billion in the first 11 months of fiscal 2017-18 (July-June), is expected to close at around the $18 billion mark or so — more than 5.5 per cent of the GDP.

When the PML-N government came to power in 2013, the current account deficit was $3.0 billion or barely 1.0 per cent of the GDP. At that time, the international oil prices were nearly $ 110 per barrel. But luckily for the PML-N government, oil prices dropped sharply in 2014, remaining below $60 a barrel for the most part of its rule. In fiscal 2017-18, oil prices climbed to $80 a barrel, but they still remain much below the 2013 level.

Dr. Ashfaque Hasan Khan, dean at the NUST Business School and a former Finance Ministry advisor, said that Pakistan’s biggest challenge remains how to manage its balance of payment crisis and its large fiscal deficit.

“Our reserves already stand at a precarious condition,” he said. “In fact, the PML-N jacked them-up through borrowing, but the bubble had to burst. The reserves have now depleted to less than $4.0 billion in real terms.”

Dr. Pasha, too, estimates forex reserves to be $3.0 to $4.0 billion in real terms, which he says could get exhausted within two to three months. “The PML-N government even delayed many of the government payments and refunds to exporters, leaving this burden for the caretakers and the new government.”

He estimates a massive current account deficit of $25 to $26 billion in fiscal 2018-19. “This needs to be curtailed to $10 billion by making imports expensive through devaluation, which would also be the first demand of the IMF for a bailout package, along with other stringent conditions.”

By June 25, the Pakistani rupee had already slid more than 15 per cent to trade at 121.5 in the interbank against the dollar since December 2017. Market pundits say it will drop further against the greenback in the coming days and weeks as the dollar demand outstrips its supply.

Shamshad Akhtar, the caretaker finance minister, in her June 12 press conference also painted a bleak picture of the state of the economy saying that the current account and fiscal deficit remain the two serious challenges for the economy, but said that the caretaker setup has no mandate to negotiate with the IMF for a bailout package.

Asif Qureshi, chairman of a leading brokerage house, Optimus Capital Management, says that the record current account deficit reflects the excessive import demand, which is fuelling fiscal deficit. “Overall the position is dangerous… the next government will be in a mess. I see no option for the next government other than to go to the IMF,” he said, echoing the alarm of other leading Pakistani economists and market players.

“The problem with political governments is that they initiate reforms under the IMF… but as soon as there is a semblance of stability, politicians go on an overspending drive, keeping the next elections in sight.” For any IMF programme, blessings from the United States remains a must as it wields tremendous influence on the multilateral donor agencies. In the last two programmes — both under the Pakistan Peoples’ Party and the PML-N governments — the US administration was supportive; therefore, the IMF ignored many slips — especially during the PML-N government, despite the fact that Pakistan continued to miss its targets.

But given the current state of Pak-US relations, there are justified concerns about Washington’s possible role. Therefore the IMF programme is expected to come loaded with stringent conditions.

A senior economist, requesting anonymity, said that Washington is likely to seek concessions on key security and strategic issues from Islamabad for supporting its bid for a bailout at the IMF. This may hurt Pakistan’s core national interests, he said.

PTI’s Asad Umar said that Pakistan was headed “towards bankruptcy” because of what he claims are the flawed policies of the PML-N, which has left the country vulnerable on every front.

“We had been predicting this for a long time. Ishaq Dar (PML-N former finance minister) kept the rupee at an artificial level, which compromised the competitiveness of Pakistani exports against the backdrop of high gas and electricity prices… Pakistani exports slumped and imports surged. The Sharif government has created a national security challenge by the kind of economic mess it created.”

Given the precarious forex reserves condition and Pakistan’s external payment obligations, talks with the IMF for a bailout package should start now and simultaneously, a process of reforms, without further wastage of time. But the caretaker government does not have a mandate to take such policy decisions, which means valuable time is being lost as Pakistan’s condition goes from bad to worse.

This means Pakistanis should brace themselves for a massive economic crunch which will bite the common man the hardest as the new government will be forced to take punishing austerity measures, including cuts and belt-tightening in development and social sector expenditure and devaluation of the currency, as well as hiking up the interest rates. The next government will have to curtail the aggregate demand, which can only be done by making imports expensive and through the monetary policy.

Already the PSDP (Pakistan Social Development Spending) has been cut to 750 billion rupees for 2018-19 fiscal from 1,000 billion allocated a year ago. This may go down further. But this strategy is easier in theory than in practice as it is an inflationary measure and has the potential to stoke social unrest.

A sharp devaluation means increasing the overall foreign debt in rupee terms, inflation and slowing down of economic activity, though Pakistani exports can get a temporary boost.

According to Dr. Pasha, Pakistan must make big moves on a war-footing in order to pull the economy out of troubled waters. In the short-term, he suggests the government can introduce an export incentive scheme by offering 10 per cent extra payment to exporters through commercial banks for bringing in their export proceeds. “If this is not done, exporters will keep their money abroad. At the same time, the import tariff should be increased to 35 per cent or so. The amount of cash margins requirement should also be fixed at 30 to 50 per cent so that importers can’t speculate.”

But in the mid to long-term, Pakistan will have to follow the long, hard path of reforms and take unpopular decisions which the PML-N government failed to take, including introducing tax reforms, slashing down of fiscal deficit, cutting down imports, slashing infrastructure expenditure, reviving or privatising loss-making units and reforming the economy rather than just banking on devaluation.

In a nutshell, the new government will find itself stuck in a corner without any fiscal space to come up to the expectations of the people. In fact, it will be forced to adopt some highly unpopular measures and undertake reforms which will hurt the common man.