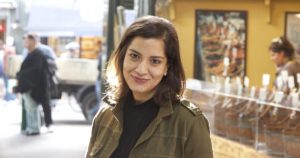 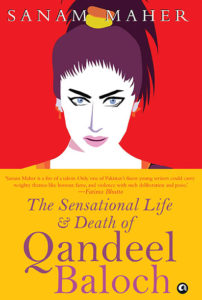 The Sensational Life and Death of Qandeel Baloch does not provide an exhaustively detailed account of the social media celebrity’s life. And that is, somewhat surprisingly, one of the greatest strengths of this book.

In her author’s note, Sanam Maher reveals that it was only days into investigating Qandeel’s life that she became disillusioned with the process. She describes how some of the people she interviewed seemed to offer scripted answers while others were contemptuous of the attention the slain celebrity was bringing to Shah Sadar Din, the village that Qandeel grew up in. It is in the author’s note that Maher talks about how she had to abandon her original quest to unearth the real story of Qandeel’s life. She writes: ‘It took me some time to realise that even if Qandeel had been available to me, sitting right in front of me, it would not have made a great difference to (my) understanding of her.” It’s an important confession to make in the author’s note as it signals to the reader that this is not going to be a typical biography, and certainly not one of those exploitative ones hoping to cash in on the death of a famous and controversial figure.

Instead, what Maher offers is something far more imaginative and intelligent. The Sensational Life and Death provides Qandeel’s trajectory from a child in Shah Sadar Din mimicking the pouting expressions of heroines on television to a young woman in Karachi making similar pouting expressions for hundreds of thousands of viewers on Facebook. This trajectory provides the book with its skeletal structure. But for the flesh and the skin, Maher offers a series of mini-portraits of Pakistanis associated with Qandeel (some intimately, others only very tenuously). It’s a strategy that should not work, but it does. By moving away from Qandeel and describing the lives of these others, the reader is given a more holistic view of the worlds that Qandeel traversed in her short life. To switch metaphors, Maher creates a mosaic-life effect and approximates a portrait of Qandeel by offering us smaller portraits of others. And it is a very colourful cast of others:

There’s Adil Nizami, the reporter who not only broke the news of Qandeel’s death but also recorded a video of her dead body with his cellphone. The clip was widely circulated on the internet and later, he questions why he ever filmed it in the first place. There is Mec, the media event coordinator, who works with models that are unlikely to ever become household names. Qandeel, however, was one of the few exceptions that he had the chance to work with. There is Khushi Khan, one of these struggling models, who at 29 is already feeling ‘aged-out’ of the industry and now aspires to survive in Islamabad by becoming a personal trainer.

There is Sabiha, the young respectable housewife from Multan who auditions for Pakistan Idol only to get rejected. She cusses out the show in front of the cameras, but her cameo is quickly eclipsed by Qandeel’s audition. There is Arshad Khan, more easily identifiable as the blue-eyed Chaiwalla who, like Qandeel, knows a thing or two about virality and overnight fame. There is Nighat Dad, the lawyer and internet activist who helped set up Pakistan’s first cybercrime hotline. There is Mufti Qavi who Qandeel famously posed with in a selfie. In one of the many memorable scenes of the book, he keeps beckoning Maher to sit closer to him during their interview. Come closer, he says, patting the floor, closer.  And there’s Qandeel’s family: the grieving parents and (lurking in the shadows of the narrative), the brother who killed her.

People who were close to Qandeel reveal a woman who was as fearful as she was confident, who would lock herself up in her apartment in the fear of losing her life and also share herself–or at least a persona that she carefully crafted for herself — with countless strangers online.

And those who did not know her are included to reveal the ephemerality of fame and the visceral struggle that often accompanies it. In the scene where young models coo at Mec and show him their outfits for approval, the reader can easily imagine Qandeel out-cooing the others with aplomb. When Maher, in one of my favourite sections of the book, goes to interview Arshad Khan, we see the painful process of becoming media-ready when your upbringing mainly prepared you for a life of physical labour. In this chapter, Maher describes how Arshad struggles with recording a congratulatory message for a local TV show. Despite being tutored by his manager, the words don’t come out right and he struggles with what readers of this book would find to be commonplace English words. The point of this anecdote is not to belittle Arshad’s pronunciation, but to show how alienating the world of fast fame can be. Maher observes:

“They do one take, and then another. Sometimes, Arshad forgets the name of the man he is congratulating. Other times he forgets to sound happy. He stumbles on the words ‘hundred’ and ‘episode.’ He sounds morose.”

But Arshad is not Qandeel. While fame captured him, she courted it herself. Maher describes how Qandeel would quiz a reporter about what was of interest to people lately: What is trending right now, she tries to find out. Cricket? Politics? Football? She wants to make videos on anything that people are discussing — because in this way, they will also discuss her.

This paragraph is followed by: “I act from the heart and I think from the heart. I’m not desperate for fame. Fame is chasing me. I’m not chasing it.”

Reading the book, there are instances where the reader may wonder how Maher assembled these anecdotes and quotes from Qandeel’s life. The book offers notes at the end, but there are no footnotes or parenthetical attributions of these sources in the main body of the narrative. But this is not a criticism: it is easy to imagine the anecdotes as having been gleaned from interviews and that the quotes could be from the many Facebook posts and interviews of Qandeel that are readily available online.

If there are criticisms of this book, they are minor. In her author’s note, Maher mentions that some names have been changed for privacy reasons, but the omission of certain details seem coyly — dare I add, irritatingly — evasive. Qandeel’s audition clip for Pakistan Idol has nearly ten million views on YouTube, and yet Maher refuses to name any of the three judges in her lengthy exegesis of it. A BBC correspondent who interviewed Qandeel is only referred to as Amber, while other journalists mentioned in the book have their full names included. The Sind Club is somewhat unnecessarily mentioned in the book, only to be obliquely referred to as the old club that once did not welcome women or dogs. These flaws, thankfully, are trivial and infrequent.

The Sensational Life and Death often reads more like a work of fiction than non-fiction. But in the best ways possible. By avoiding false promises of delivering the real story of what happened to Qandeel, Maher allows the reader to focus on the kinds of people and places that create women like her and then destroy them. Occasionally the scenes feel too composed, too contrived, but those moments are rare. Maher’s prose is finely tuned, but does not draw attention to itself. Her observations can be critical and sympathetic, and are often both at the same time. She is the rare writer who can put together Qandeel’s story, as well as the stories of so many others, with not just skill but also faithfulness.