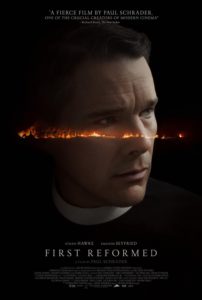 An important conversation takes place towards the beginning of Paul Schrader’s brilliant film, First Reformed. Ernst Toller (Ethan Hawke in his finest performance to date), a deeply troubled Protestant minister, has been invited by a pregnant young woman named Mary (Amanda Seyfried), to her home. She wants him to counsel her husband, Michael (Philip Ettinger), whose increasingly bizarre commitment to environmentalism scares her.

Mary is afraid that her husband will force her to have an abortion because of his belief that it is wrong to bring a child into a doomed world. Ernst understands Michael’s well-founded but exaggerated concerns. As he tries to assuage Michael’s fear of impending environmental doom, a remarkable dynamic comes into play and steers the conversation in a direction where Michael’s logic begins to make as much, if not more sense, than Ernst’s optimism.

The conversation challenges Ernst’s beliefs, views and ideology, while highlighting the strength and fallibility of his faith. At the end of the scene, it is no longer clear if Ernst’s impassioned hopefulness has prevailed over Michael’s obsessive despair, or the converse has taken place, but the stage has been set for a series of harrowing events that lead to a powerful climax, the like of which American cinema has not seen in decades.

Ernst Toller lives alone in the titular Dutch Reformed Church in upstate New York, tending to a miniscule congregation with disciplined sincerity. His vocation offers him a refuge from both guilt and grief. The reverend used to be a military chaplain when he encouraged his only son to enlist in the Iraq War. The son was killed in the war and his marriage ended under the burden of his son’s death. He is gravely ill and drinks at night. His church is about to celebrate its 250-year anniversary and he is a reluctant participant in the planned festivities, which have been taken over by its parent establishment, a thriving cash-rich mega-church known as Abundant Life Ministries, run by Reverend Joel Jeffers (a wonderful Cedric Kyles).

In a bid to deal with what is an unbearably sad life, the conflicted man of cloth keeps a journal to jot down his thoughts, doubts and confessions. The device, which Schrader has used previously in Taxi Driver (1976) and Light Sleeper (1992), serves First Reformed well: it helps create an intimate relationship between the viewer and the Reverend, and understand the melancholic pain of a man undergoing deep spiritual, physical and psychological crisis.

Schrader’s protagonist is reminiscent of the heroes of Robert Bresson’s Diary of a Country Priest (1951) and Ingmar Bergman’s Winter Light (1963); only he is more raw and real; his tormented soul is examined with clarity.

First Reformed is a tribute to the style of filmmakers Carl Theodor Dreyer, Robert Bresson, and Yasujiro Ozu, the subjects of Schrader’s influential 1972 book Transcendental Style in Film: Ozu, Bresson, Dreyer. Schrader proudly acknowledges the influence of the three filmmakers, along with that of Ingmar Bergman and Andrei Tarkovsky.

The fascinating last scene of the film — ambiguous by design and a departure from the film’s decidedly transcendental style — is its finest. Does God save Ernst from killing himself or does He let him take his life in Gethsemane? Viewers of the film are divided on the answer to the question. The ambiguity is but one of the many strengths of First Reformed, the crowning work of one of American cinema’s most gifted filmmakers.