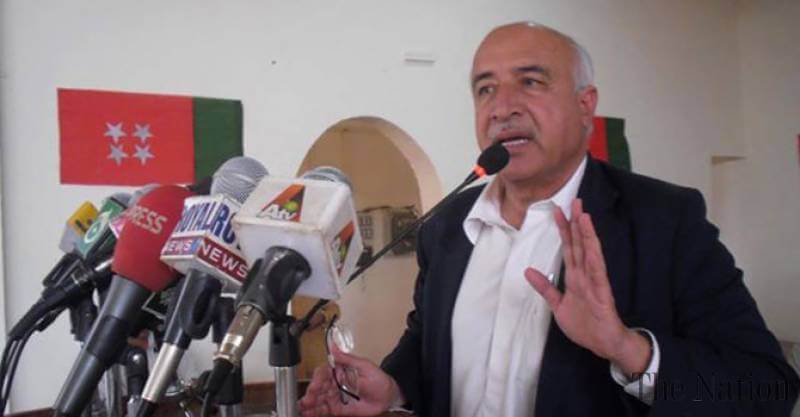 The National Party (NP) came into existence in 2003, when Dr Haye’s Baloch National Movement (BNM) and the Hasil Khan Bizenjo-led Balochistan National Democratic Party (BNDP) joined forces. The group classifies itself as a centre-left nationalist political party and claims to have the largest pool of political workers in the province.

The NP’s traditional base is Makran region in southern Balochistan, which is inhabited by non-tribal communities, unlike northern and central Balochistan. This region has been a breeding ground for Baloch ethno-nationalist politics from the 1970s onwards. The NP and its predecessor, BNM, have a committed block of voters in all three districts of Makran Division.

However, the surge of Baloch militant groups has impacted NP in two major ways. Firstly, the militants successfully wooed the youth who do the work of grassroots-level organisation away from the NP, towards more radical politics. Secondly, the NP lost key leaders and seasoned workers to political violence. Apparently taking issue with the federalist politics of the NP, notable figures of the party such as Maula Baksh Dashti, Naseem Jangiyan and Major Ali Mohammad were allegedly killed by armed separatists.

The competition for political turf has  placed the NP and Baloch separatist groups in antagonistic positions. This has weakened the organisational capacity of the NP over the years. It has started to rely on electables and other powerful figures, who do not have the requisite political background.

Undeterred by the militants’ boycott call, the NP contested the 2013 elections and managed to win 11 provincial assembly seats. However, the overall voter turnout in Baloch-inhabited areas remained very low. Post-elections, the NP went into a tripartite power-sharing arrangement with the PMAP and PML-N. According to the ‘Murree Deal,’ the NP and PML -N would govern the province for two-and-a half years each. As it transpired later, Nawab Sanaullah Zehri’s government was dissolved after he resigned, fearing a no-confidence vote. Under the Murree agreement, the NP managed to acquire the key ministries of Finance, Health and Agriculture.

Despite generating considerable excitement and hope in its early days, the National Party-led coalition government could be termed  inconsistent at best. The attempts to bring militants back into the mainstream and to the table bore no fruit, possibly because the NP government had nothing really concrete to offer. Sectarian violence also continued to pose a serious law and order problem. Nevertheless, the activities of various militias were selectively curtailed. These groups, when active, were accused of being involved in religiously driven violence, human rights violations and other criminal activities. Scant progress was made on the issue of missing persons. According to press reports, the disappearances continued during the two-and-a half years of Dr. Malik’s government.

The most notable contribution of the government was perhaps, in the education sector, where the budget to be spent on the sector was increased from a paltry four per cent to 26 per cent of the overall available funds. However, the spike in the budget did not result in any massive transformation. Ghost schools and teachers, poor infrastructure, low enrolment and political appointments continued to be a problem.

The ruling coalition in general, and the NP in particular, take credit for the establishment of various higher education institutions in the province. While the Dr. Malik-led government claims that it initiated the University of Turbat, the University of Loralai, the Makran Medical College and the Khuzdar Medical College, its detractors argue that some of these projects were already in the pipeline when the government took over. Yet, one has to acknowledge that the NP government set the wheels into motion. The Makran Medical College and the University of Turbat are functioning institutions today, and a major chunk of enrolled students come from middle and working class backgrounds. Furthermore, these projects also created a fair number of public sector jobs, which are much in demand, as the private sector is almost non-existent in Balochistan. Nonetheless, critics of the party claim that the largest chunk of contracts and jobs in these projects goes to the politically influential. Thus, one often encounters sullen NP workers in the election season, complaining that the more powerful factions within the party,have monopolised the resources.

In Makran division, the NP’s traditional base, the party exclusively focused on Turbat city where it launched its flagship scheme, Turbat City Development Project, a multi-billion rupee urban development enterprise involving the construction of drainage systems, parks, roads and flood prevention architecture. According to some sources, the idea was conceived by the previous government, under a project called ‘Kech Valley Project,’ but funds were embezzled.

Outside Turbat city, in the rural areas of Makran, little development work took place. A serious shortfall in electricity supply caused long blackouts in interior Balochistan, hitting the agricultural sector the hardest. Gwadar, the winter capital of the province, and the promised key to future development of the region faced a severe water crisis, which the provincial government failed to resolve conclusively. Nonetheless, the Malik government did manage to complete the long overdue Shadi Kaur and Sawad dams.

Having failed to dramatically improve governance in Balochistan and faced with the entry of new pro-establishment political forces such as the BAP, the NP does not seem to have bright prospects in the elections, except for a few constituencies. The powerful Buledis of Menaaz and the Langoves of Mangochar, previously NP supporters, are supporting BAP. The current NP Mayor of Turbat, Qazi Ghulam Rasool’s position in PB-46 appears to be quite strong, due to the reconstitution of electoral constituencies and his popularity among the general public. However, fierce competition is expected from the BNP-Awami’s Ehsan Shah. On NA-271, the Kech-Gwadar National Assembly seat, the position of Abul Hassan Baloch of the NP depends on whether he manages to swing the Darzada caste voters in his favour. This block of voters is being mobilised by Baloch Awami Mahaz (BAM), a group formed right before the elections, headed by former NP leaders Shakeel Ahmed and Mubarak Ali. On PB-47, NP’s Kahuda Aziz is the strongest among three candidates. However, Major Jameel of BNP-Mengal seems to have a good standing as well. The results will probably depend upon last minute wheeling and dealing in this constituency. The prospects of NP’s Mansoor Baloch PB-48 appear to be grim. Spread over an area hit hard by insurgency, election campaigning in this constituency is proving to be difficult. As of June 25, at least two candidates have been attacked. While BNP-Mengal’s and BNP-Awami’s campaign has started, Mansoor Baloch is yet to visit the area.

In northern and central Balochistan, the standing of Sardar Kamal Khan Bangulzai (NA-267) and Nawab Aslam Shahwani (PB-35) of NP seems promising, more so if the ongoing rumoured seat adjustment talks with the JUI succeed. Having said that, the 2018 general elections turnout is going to be low yet again, especially in the rural areas of the Baloch-populated parts of the province, owing to threats by ethno-nationalist militants. Thus, the actual competition between the candidates, if any, is going to take place in the urban centres of the province. In these uncertain times, observers of Baloch politics argue that the positions taken by the militants and the military — the more powerful stakeholders in the province — will be ultimately decisive.